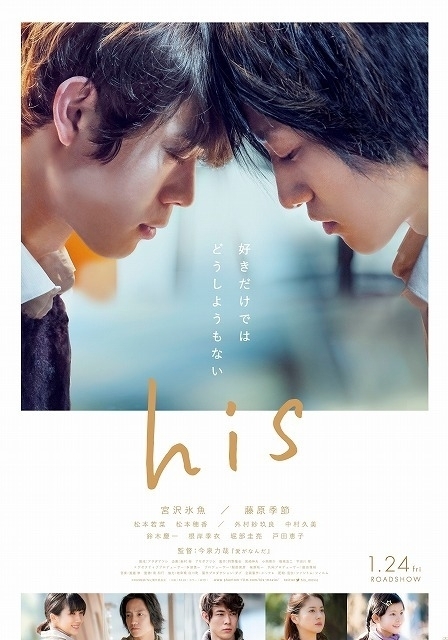 As male high school students, Shun (Hio Miyazawa) and Nagisa (Kisetsu Fujiwara) first meet and fall in love with each other. Around the time when Shun is about to graduate from a university, Nagisa tells him that he can't see a future with him. They decide to break up. Years later, Shun lives alone in a rural area. Nagisa and his 6-year-old daughter Sora (Sakura Sotomura) appear in front of Shun.

Noone Mar 07 2021 5:25 am Shun is a really kind man. He still forgive nagisa even though nagisa hurt him in the past. And he bring his child too... It really hurts to be Shun. Well i know nagisa had hard time too, but it was all because his action...

Louie Jan 29 2021 11:03 pm Just finished watching this heart-warming movie, I prefer the movie rather than the series

Zoe Armas Nov 30 2020 10:41 am The movie really warmed my heart since the story depicts the values of forgiveness, understanding, generosity, and love. All the cast had portrayed their roles as well. I am really moved by how the movie ended cause it showed how accepting one another can really change the perspectives of people’s minds. I do believe that with respect and love, we can all progress to a peaceful future.

Loek Oct 01 2020 2:44 pm Just got from the festival "Camera Japan" in Amsterdam and watched this movie. Excellent play from both boys and the little girl. Magnificent movie!

Jao Aug 10 2020 5:51 am The series version looks promising. It focused more on how they first met and fell in love.

ckfrndshrdr Jun 08 2020 9:49 pm I wish to watch this movie. I am staying in the Philippines. Video streaming i dont mind paying better if not?. Thanks for the help.

Lollypop Apr 25 2020 11:54 pm i really wanted to watch this drama.. where i can watch this actually.. i had watched the trailer numerous time already.. who knows? please let me know..

Hale Mar 29 2020 8:49 am Does anyone know information when the DVD will be released??? @Isi, especially if you still looking in here

Bill Michael Mar 20 2020 7:14 pm I just hope I can see this. It was released in January and here it is the end of March and still no sign of where it can be seen.

lmao pattyniko Mar 19 2020 11:53 pm This movie was pretty good. pattyniko is being overly critical of an actor. Hio is mixed; of course, he's not going to look fully Japanese. He does not look entirely "white" or like a "basic white guy". I feel like you're mad because they didn't cast a full Japanese guy and I don't know why. You're sounding a little prejudice in your comment.

But anyway, still a good movie!

PattyNiko Mar 16 2020 3:30 pm I really want to watch this movie! I think Fujiwara Kisetsu is way better looking than Hio - Hio doesn't even look Japanese. He just looks like a basic white guy. They could have found a better match for Fujiwara san, more on the lines of Yamazaki Kento or Matsuzaka Tori, real Japanese studs. Hio's acting looks so stiff.?

Isi Dec 20 2019 7:53 am Just watched this tonight as my university had the producer come to show it and all I can say is amazing!! I won’t spoil anything but when it’s released go watch it. It’s so good and lots of different emotions presented so beautifully.

Shi Nov 14 2019 7:04 pm This movie looks splendid and my heart is literally bursting from the trailer. Can't wait for its release!!

hello Sep 16 2019 8:51 am I knew about this film called "His" wayyyyyyy before I knew him because I'm a BL lover hahahahahaha. Then I started watching Fake Affair and found out about Miyazawa Hio and fell in love with him. And now I found out that he's the actor in this BL film OMGOMOMGOMG... The coincidence is beautiful <3