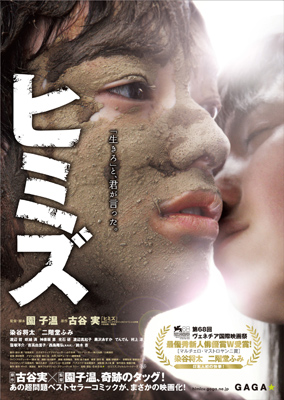 Set after the Tohoku earthquake and tsunami, all 14-year-old Yuichi Sumida (Shota Sometani) wants to become is a regular boy and live a decent life. His environment though repeatedly drags him into the mud. He runs his parent's rental boat business, which is located next to a nondescript lake. His mother frequently comes home with different men and soon she leaves him entirely. His father only comes around looking for money. Whenever Yuichi's father is drunk he tells Yuichi "I wish you were dead."

Keiko Chazawa (Fumi Nikaido) is a classmate of Yuichi Sumida. She harbors a severe crush on Yuichi. Keiko's home life isn't much better than Yuichi's. Her mother builds a gallows with a noose in place for Keiko to take her own life. Her mother believes her life would be better off without Keiko.

Under these circumstances, Keiko pays a visit to Yuichi's home. A group of people are lingering nearyby who live in make shift tents on the property. Keiko tries to befriend Yuichi, but she is berated and even physically assaulted. She doesn't get deterred though and sticks around.

One day, the yakuza come by Yuichi's home. They look for Yuichi's father who is nowhere to be found. The men then tell Yuichi that he has to come up with 6 million Yen by tomorrow to pay off his father's debt. Yuichi already heartbroken by his mother's abandonment and abuse from his father nears a tipping point. A string of incidents then occurs that brings Yuichi's world to a screeching halt. Is there light at the end of the tunnel for Yuichi? 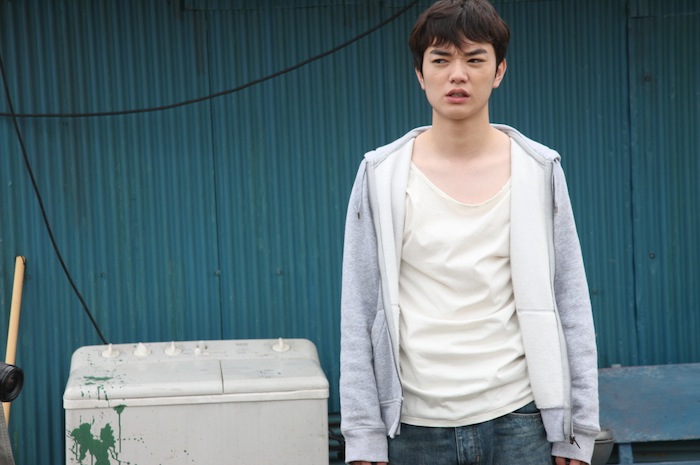 From_Philippines Sep 27 2016 3:41 am Done watching today. There a middle school age Kiss. Keiko kiss Sumida and at the last part Sumida kiss Keiko. The story imply is to overcome our weakness and fall down and don't give up. Sumida killed his father and Keiko help him to surrender. The main characters portray there role in excellent way. Slaping each other and physically abuse is needed in story I think.

Peacewon Mar 09 2016 1:01 pm I found the role of the lead actress well acted but the character was annoying and boring. I found the lead actors performance well done but the movie overall for me was not engaging. I hope the manga was better.

Thatspartoflife Oct 10 2014 9:48 am Himizu is a movie that really can tug your heart.Its like the feelings of the character really follows you.The actions of the charactor and the ending really make me very impressed.Its so simple yet its really heartbreaking.Great acting too for young actors shota sometani and fumi nikaido

michelle Jul 28 2014 3:25 pm Sometani's performance in this movie was just brilliant. His portrayal of someone suffering from severe depression was believable. I was immersed through the entire movie. That negative comment below can be totally ignored. Watch this!

Ki Oct 15 2011 1:12 pm Watched "Himizu" at the Busan International Film Festival and felt completely floored by the movie. Imagine standing in the middle of a tsunami and you'll get an idea of what the movie feels like. There is also a lot of pain and hurt bottled up within the film.

I haven't watched Sion Sono's "Guilty of Romance" yet, but compared to his more recent films, "Himizu" feels a lot closer to (a shorter & much angrier version) "Love Exposure" than "Cold Fish." Without a doubt my favorite part of "Himizu" is the ending. The final scene made my eyes watery and I really felt it was one of the more memorable endings I have watched.

Also came away really impressed with Shota Sometani & Fumi Nikaido who really nailed their characters. Fumi Nikaido bears a strong resemblence to Aoi Miyazaki in the movie, but after a few minutes thoughts of Aoi Miyazaki quickly dissipated. Highly recommended!

P.S. - Lived in New Orleans when Hurricane Katrina occurred, so watching "Himizu" brought back a lot of feelings I felt post-Katrina. Movie may hit home to me more than others.

Jeff K Sep 18 2011 7:02 pm I saw this at the TIFF on 09/16/2011. This movie is a total waste of time. There isn't one sane character in the movie, because the movie never ventures out of it's own "asylum", so to speak. I left the theatre wanting to engage the psychos on the streetcar back to the subway in some sort of battle. Just move on. Nothing to see here, leave the psychos to the cops.