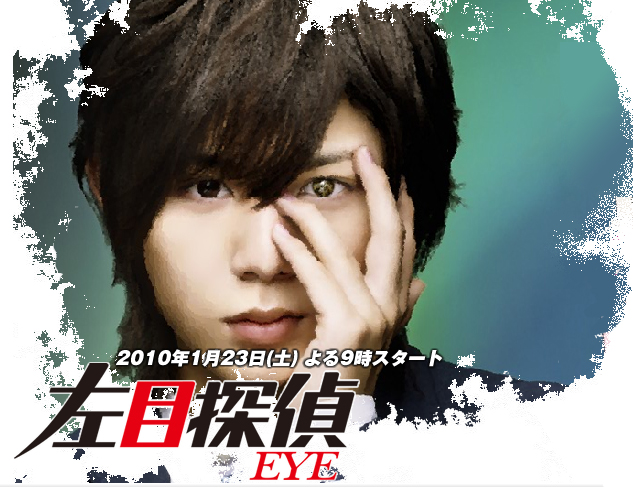 In the SP "Hidarime Tantei EYE," which aired in October, Ainosuke Tanaka (Ryosuke Yamada) receives a cornea transplant in his impaired left eye. Ainosuke received the transplant from his older brother who mysteriously died. After the operation, Ainosuke would see sporadic images of money or a robber in his left eye. With the help of his high school nurse Hitomi Sayama (Satomi Ishihara), Ainosuke starts to investigate his brother's death believing the images he sees are clues to his death. At the end of the SP, Ainosuke makes the shocking discovery that his brother's death was faked and he is actually the leader of an evil crimninal organization.

Now Ainosuke will face off against his brother Yumehito ([[Yu Yokoyama]), who is a genius criminal responsible for numerous crimes. Meanwhile, Hitomi (Satomi Ishihara), who is in heavy debt due to her shopaholic ways, dreams of a way to pay back her debts with the help of Ainosuke's special abilities ...

ikeruishi Sep 24 2017 3:29 am I don't understand why he can still see images. The images were supposed to be related to the future actions of his brother, right?

mebelle Apr 11 2016 6:05 pm Yamada act. Very cool when i'm watching this drama i remember when i get sad with a bit of angry i shout and bumb my head in a hard thing a ,and when i want to remember something my head is getting hurt especially in our test exam's!!!! I love this drama it is so related to my life i cry hard and love yamada ryosuke harder!!!

suriji Feb 06 2013 2:56 am @suriji The written synopsis isn't really the summary/spoiler for the drama. It does spoil what happened with the 'special/SP' which aired before this drama. So it's prequel spoiler. This drama is the continuation.

robyne Jul 06 2012 10:37 pm this was EXCELLENT!! yamada was extraordinary in it. i am very surprised that he didn't win some award for his performance cuz he sure should have!

You just gave away the plot.

HSJandNYClover Jan 24 2010 5:59 am yamada is very good in acting as a detective and he did it very well... I can't wait to watch Hidarime Tantei Eye

ryosuke yamada is an amazing actor :P he is really good as the detective type

swordsabbatir Jan 05 2010 2:49 am woah, honto? I watched Tantei Gakuen Q and I think he is really good when portraying a detective character. I can't wait for this drama.

LenaTamagone13 Jan 02 2010 12:47 pm Yeah, i watched the video, well it was an interview or something like that but the thing is that, yes, Nakayama Yuma is going to be in an episode, i don't know if he'll be permanent or if he'll be just one episode. Actually i don't like him, he ready has a dorama D: but that's just my point of view.