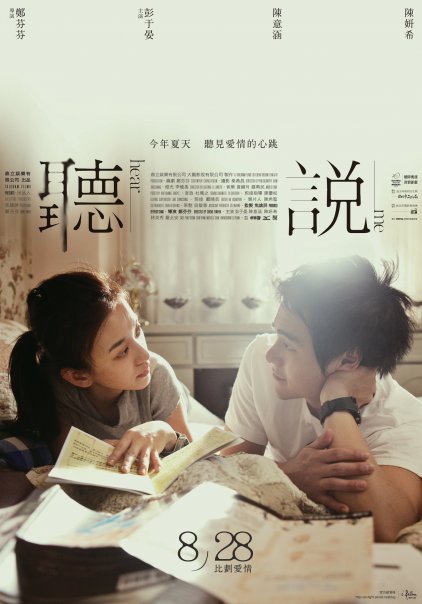 Two deaf sisters support each other, while older Xiao Peng attempts to become a swimmer for the Deaflympics. Younger sister Yang Yang stands nearby ready to support her in anyway possible.

vian Jan 09 2020 11:22 am sweet movie, this movie give some positive feelings the first seconf we finish it

zikzak nakali Aug 03 2016 2:09 pm Its really good movie n amazing love story I really like this style thanks to the writer n the artist in the film I felt love n emotion when I see this movie I like the hero of the movie his role is to dame good

mybamz nawaz Apr 05 2015 1:16 am Its amazing i like the movie i wish if i can meet the stars of this movie specially eddie peng.once again i love this movie so much....

Nadia Jan 22 2015 6:24 am I have watched this movie last year. This is one of great story I had ever seen. I love the story that going very well. I never find a such movie with 'body language' inside. The story brings a lot of moral values. The relationship between Xiao Peng and Yang Yang was developed strongly. I love the way Tian Kuo's struggle to win Yang Yang's heart. What a good and awesome movie! I intend to watch it again :)

I have to say, parents are the one who always love you. Great and cute parents.

KONG Feb 02 2013 1:27 pm the story is good and inspiring, but Tian Kuo character is boring and his romance scenes with Yang Yang is not that strong. The guy character seems too stupid and childish to be partnered with girl character like Yang Yang who way more matured and independent, and i think this movie failed to focus on the relationship between them.

The movie poster should featured the sisters picture instead of the guy. Their bond is stronger, especially when Yang Yang and Xiao Peng resolved the conflicts together, while the guy was busily contemplating either the girl like him or not, without realizing that the girl may have her own problems which may be the reason he was ignored.

Thara May 20 2012 1:33 pm Beautiful story :) I really﻿ love the pairing Eddie Peng and Ivy Chen. They look so cute together :) Awesome chemistry. Want to see them act as a couple together in a drama series. and wish they could hang out in real life too ^_^

Alejandro Saenz Feb 04 2012 10:43 pm Great movie. Truly romantic. The best Taiwanese film that I ever seen. If you liked this one, I recommend you to watch One Day, another Taiwanese film, not be confused with the American movie with the same name. They are not related.