Hanzo the Razor: Sword of Justice 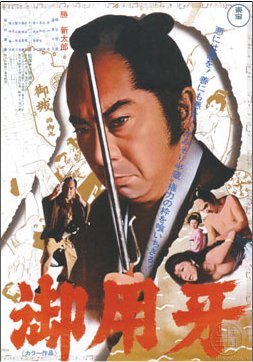 The first film in the series finds Hanzo in trouble with his boss when he won't sign off on some papers for the higher ups as they jeopardize his honor. When he looks into things a little more he uncovers some problems that all the way up to the top of the chain. As he works his way up to the top with the help of a pair of former criminals who know wish to do well, he finds that he can't trust many of the people he meets along the way and that he'll have to interrogate many ladies to get the information that he needs.

Herein lies Hanzo's claim to fame - his interrogation tactics. You see, Hanzo possesses the 'long arm of the law' but when he says that, he's not referring to one of his two upper limbs. You figure the rest out. In order to procure the information he needs from the suspicious women he encounters, he has them bound in a mesh net above him, then lowered onto his 'long arm of the law' where he spins them around on his mighty man meat until they finally give him the information he needs.