Hanamizuki -May your love bloom a hundred years- 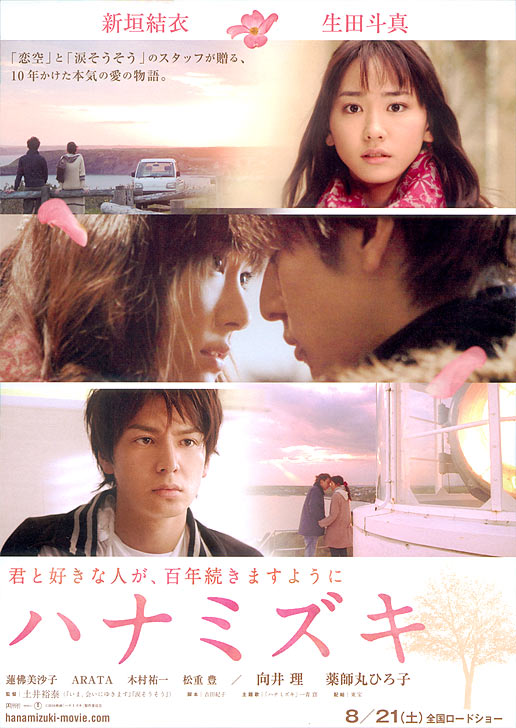 Sae (Yui Aragaki) is a high school student who is studying hard for her college entrance exams. She lost her father when she was very young and so lives her mother Ryoko (Hiroko Yakushimaru) in Hokkaido, Japan. Her father Kemimichi (Arata Iura) once planted a dogwood tree in their garden after he found out he had a terminal disease and could not watch Sae grow up. She hopes to enter a university in Tokyo.

She then meets Kouhei (Toma Ikuta), who attends a specialized high school teaching fishery. He hopes to follow in the footsteps of his father and grandfather as a fisherman. These two young people meet and have a long distance relationship. Although their love is strong it does not last.

10 years later these two people have a miracle ... 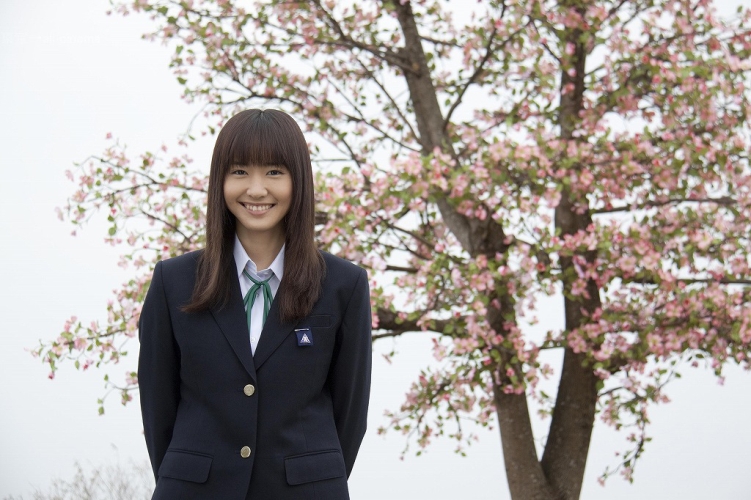 Rommel Reyes Dec 09 2014 5:36 am saw this 2 years ago, and still remember the bitter-sweet feelings when i watched it. i might watch it again later

Lexy Mae Keith Ladera Jan 11 2013 2:12 am Whoa ! This love story is really great ! Both of the lead actress and actor had done well .. It is true that love hurts but TRUE LOVE can wait .. Some of Teenagers who have seen this love story must really experienced that kind of situation .. I experienced it also ! Love conquers all !! :D

Rommel Reyes Nov 23 2012 5:13 pm loved the film, the acting and the story is great, it's not boring, some people must learn to appreciate good storytelling. this is not a hollywood-in-your-face movie. it was my first time to see the movie yesterday on cable tv, and luckily I saw it again today early morning. i'm from the Philippines and i appreciate Japanese and Korean drama more than what is offered in here.

soap operas and drama films made here are often exaggerated to attract attention. I hate it.

Japanese and Korean storytelling is my cup of tea.

gakkyfan Jul 22 2012 3:35 am So I’m watching this J-movie the other night called HANAMIZUKI (which I’d aquired for the sole reason of enjoying the screen antics of the lovely Aragaki Yui), and though it was probably a decent enough movie, sadly, I found it to be insufferably BORING! Your typical romantic feel-good movie, the story involved both Aragaki and her co-star Ikuta Toma running around confused about their love for each other, breaking up and then coming together, geez, I was wishing they’d make up their minds!

Astrid Jul 08 2012 9:50 pm All I can say about this movie is it's SIMPLE there's tons of movies that has a story like this. i ended up being bored haha

LoveHurt Jun 28 2012 4:08 pm The movie was kind of boring. I had high expectations because I really love Ikuta Toma and I liked Yui in Koizora. Ikuta's character had a rough life and made many mistakes but everything ended well. I was disappointed by Yui because her acting was the same as in Koizora. Yeah, she pulled off the character of Mika with her innocence but this character was supposed to be different and the aura was supposed to be more mature. I know that it was her first time portraying and adult character so I'll let it slide but hopefully she improves.

maneki hobbang Oct 10 2011 9:51 pm this film made me realize that "okaeri" and "tadaima" are the most beautiful words to exist.

ahaks0901 Jan 29 2011 5:11 am Im so in love with this movie..looking forward for the DVD and ofcoz..Toma & Gakky act really amazing Toma really deserves to win the award! congrats toma!!

daisyamapi Sep 11 2010 11:41 am Whoaaa Gakki take a shoot in NYC...she's so pretty...i love mukai osamu!! i think 2 of them are best couple!! Beautiful n handsome, can't wait to watching this new japanese movie, thxz for the cute pic

KAT-TUNberry Jun 07 2010 2:17 pm WOW i love Gakky and Toma, so to see them both starring in a movie together, and a romance at that... :D can't wait until i can watch it in the UK! I actually am tired of waiting for this year's japanese films to come out on dvd because they all came out so recently that i'll have to wait so long! :/

Keekii Apr 13 2010 2:03 pm I'm excited to see the trailer! I love Toma Ikuta and I know Misako Renbutsu from Nanase Futatabi as well ^^ Cool that they are shooting in America too!! It's so hard to wait for japanese movies AND a translation for us unfortunate ones that doesn't master Japanese yet (,>o<,)