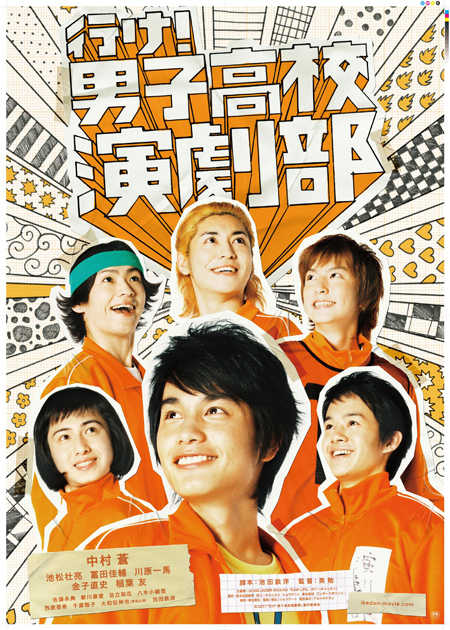 Genki Ogasawara (Aoi Nakamura) enrolls in an all boys high school. He then sets out to become popular with girls and looks for a club to join at school. Genki then comes across a performance of "Romeo and Juliet" performed by the school's drama club. Genki falls for the lead playing Juliet and decides to join the drama club. Genki isn't aware that the drama club is about to be shut down and that the person playing Juliet is actually a senior male student in drag. Genki is shocked.

Having joined the drama club, Genki is quickly chosen as the group's leader. The only two other members are Joe (Naofumi Kaneko) and Ueda (Keisuke Tomita). An advisor for the club Kanda (Tetsuhiro Ikeda) is only interested in girls. Kanda himself is an idol otaku and doesn't have interest in the drama club. The club is in trouble, because the club will be shut down by the end of the month if it doesn't get 5 members. The club members in desperation persuades Tamura (Kazuma Kawahara) to join. Genki also puts his friend Kaji (Sosuke Ikematsu) on the member list, telling him that he doesn't have to do anything. With 5 members in the drama club the group is able to stay intact. The club now has to take part in a play contest.

The members in the drama club have no clues on what they should do for the contest so they decide to visit a female high school famous for their drama club. The guys dress up as girls to visit the school. At the female high school, Genki quickly falls in love with Mai (Yua Shinkawa) who is performing on stage. The members then see Mai getting pushed by another girl Kaneko (Masako Chiba) & the guys decide to come to Mai's rescue.

Meanwhile, a new boy Hashimoto (Yu Inaba) joins the drama club after injuring his foot and having to give up on soccer. Now with only 3 weeks left for the play contest, Kaiji works on a script called "The Last Leaf." Finally the day of the play event arrives ....

Bonita Jan 14 2017 6:15 pm Finally! After hours of research, I found the title of this movie!!!! 2-3 years ago, as a bored hooman switching channels back and forth, I finally found something that caught my attention, it was on screen red by hbo (asian movie channel), This is the first Asian movie that I literally laughed out loud! Like every second is so funny, and this movie has the humor that me and my friends can relate to. And then, back to the present time, I felt bored again and all of the sudden, I remembered about the awesome japanese movie I saw but damn, I can't remember the title!!! I started searching "Japanese comedy film in 2013" (guessing the possible years it was released), ..2012, 2011, 2010.. but no luck, I remembered something about the last leaf theater play, so I tried "Japanese Film featuring The Last Leaf", "The Last Leaf Japanese movie", "The Last Leaf in other medias" but still, results are irrelevant. I came across this site and found a sub folder J COmedies, and holy guacamole, after checking ALL movie titles on the list of results and reading the plot summary, Finally!!!! I found this masterpiece!! Wooohooo! I am going to watch this again, I'm so excited <3

mai_tiyan May 30 2013 1:03 am I really love this movie, I was laughing laudly from the beginning till the end, it was so funny, refreshing and reminding me of my high school memories, because i was also joined with Drama Club before... so i know how the feeling... the excitement before going on stage, the preparation.. cool... so many wonderful memories.. just like this movie.. very good.. love this..