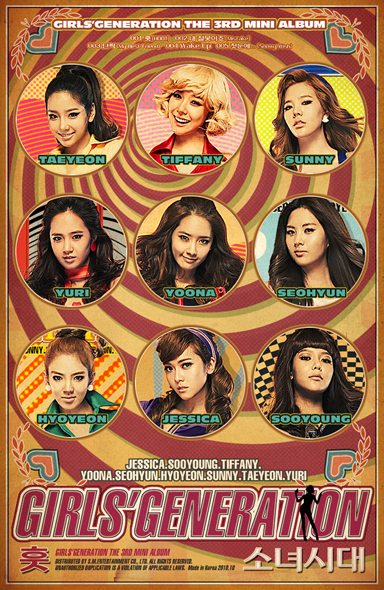 Each one of members were shown through special promotional videos by SM Entertainment on July 6, 2007. Before Girls' Generation debut, Yoona began her acting career by acting at the drama "Two Outs in the Ninth Inning." The group then debuted with their first single "Into the New World"〈다시 만난 세계〉on August 2, 2007 and also released their first album "Sonyeo Sidae" in the same year. Their debut album was not as successful as their future albums would become.

The group then released their first mini album "Gee" on January 7, 2009. Title song "Gee" went to number 1 on Korean music charts. On June 29, 2009, the group's second mini album "Genie" ("소원을 말해봐") was released. Title song "Genie" ("소원을 말해봐") became popular and sold over 100,000 copies. Girls' Generation had their first Asia tour titled "Into the New World," which started in Seoul on December 19, 2009 and went through Shanghai, China and Taiwan.

On September 8, 2010, Girls' Generation made their debut in Japan with their single "Genie." Two more singles, "Gee" and "Mr. Taxi/Run Devil Run" were also released. In June 2011, The group released their first Japanese album "GIRLS' GENERATION." The album sold more than 600,000 copies in Japan.

Jezziebear Oct 04 2017 3:18 pm SNSD is my ultimate favourite girl group, their my queens, they are just so awesome. No matter, how many groups appear or have good songs I will always love and cheer SNSD on. My favourite ultimate bias , my queen is Hyoyeon unnie. ??Unnie, your just so awesome, love your dancing, your humour, everything about you is just so good. Your inspiration!!! ????

Bill farmer Jul 28 2016 12:19 pm Girl Generation band is the best band I've heard in decades these nine girls are awesome I watch their videos every day I love this group I'm 65 and I'm a big fan keep up the great work your songs are awesome

Marques Wilson Jul 01 2016 10:41 am I have been following this group for a number of years and I cannot get enough of them. SNSD rules.

YoonYulTaeSicSeo Jun 30 2015 3:12 am Hope to see u all in person at the Philippines with Sica Unnie. I love SNSD 4ever

YoonYulTaeSicSeo Jun 30 2015 3:10 am Forever SNSD. For me they are all Main Vocalists, Main Dancers, Main Rappers, thry are all Face Of Group and they are all leaders (I wish ^_^ )

victoria Feb 21 2014 9:20 pm i really like the song"i got a boy" by girls generation. My sister played it on her phone a long time ago and said her friend was korean and loved the song. Ever since then me and my two brothers would dance in the living room, trying to force out the correct lyrics from our mouths.

https://svpply.com/hilariowestfall Jan 14 2014 6:58 am The starting salary in a domestic call center industry of the Philippines had rapidly grown to accommodate the growing demand for call center outsourcing marketing newsletter operators.

wisata pulau tidung Sep 12 2013 6:16 am Snsd please continue inspire sones and your fans.. We will always be in your side and we will support you no matter what !! Fighting .. Keep it up

SoneSheena Sep 01 2013 2:47 am SNSD will always be the best of all the best :)) Snsd please continue inspire sones and your fans.. We will always be in your side and we will support you no matter what !! Fighting .. Keep it up (y) i love you!!