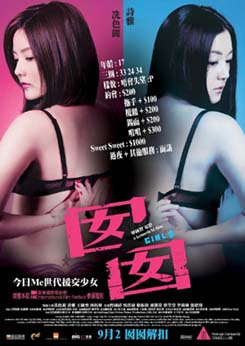 "Girl$" follows four girls who turn to prostitution through the internet for various reasons. Icy, the leader of the group, sells herself to support her deadbeat boyfriend, Gucci sells herself for an expensive handbag, Ronnie is a rich girl who sells herself out of boredom, and Lin sells herself in hope to find true love.