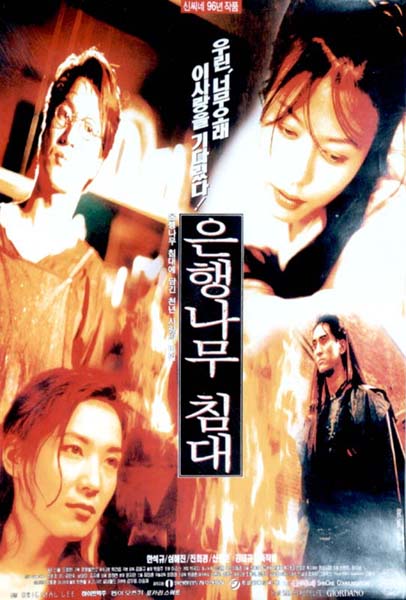 The Ginko bed is the fantasy film that explores two integral aspects of romantic love - devotion and obsession. While the character played by Han Suk-Kyu is the representation of the whole-hearted dedication to a loved one, the opposing character, played by Shin Hyun-Jun, is the representative symbol of the desperate obsession. Not surprisingly, these two characters are equally accepted by the audience, for they acknowledge the fact that taking the extreme measures to attain one's love is the product of the frustrating reality. This is the reason why, although his exterior is portrayed as the ruthless predator, Shin Hyun-Jun still evokes one's sympathy. The commercial success of this film is clearly due to the successful portrayal of the two very opposing characters who choose the different course of actions based on the very same yearnings. The Ginko Bed is one of the first Korean films that reaped the full benefits from the special effects. Although we've had the movies employing various special effects in the past, they stayed at the experimental stage. In this film, however, the special effects were used in the perfect harmony with the film, enhancing and amplifying the atmosphere of certain scenes. The Ginko Bed remains in the Korean film history as the showcase for the most successful application of the special effects.