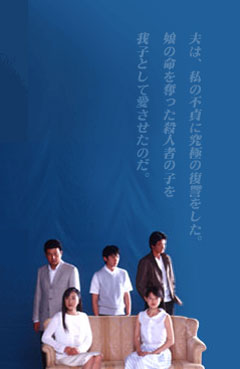 Fifteen years ago, Natsue (Yuko Asano), the wife of the president of Tsujiguchi Hospital, agreed to sleep with Murai (Eisaku Yoshida) a young physician who forced himself on her. At about the same time, her daughter Ruriko, whom Natsue dearly loves, is murdered by a man named Saishi. The tragedy is a blow not only for Natsue but also for her husband Keizo (Tomokazu Miura). Keizo suspects his wife’s fidelity. To gain his revenge, he decides to adopt the child of the murderer. Not knowing this, Natsue names the little girl Yoko, and promises to herself that she will love Yoko like her own daughter and create a happy home. However, fifteen years later, Natsue discovers by chance that Yoko is the daughter of Saishi, the individual she most hates. In despair about what her husband has done to her, Natsue begins to treat Yoko meanly. Yoko becomes concerned about why her mother’s attitude has changed so abruptly. At this point, Murai reappears in front of this shattered family. More tragedy then befalls the Tsujiguchi Family—a story of unimaginable love and hate. -- TV Asahi