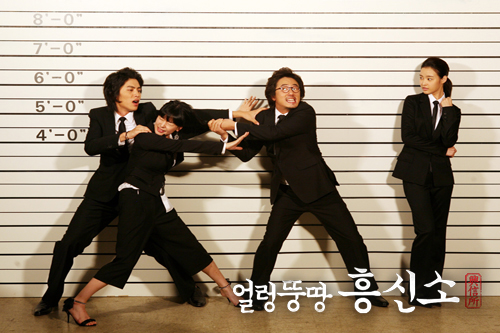 The three characters of the drama -- Moo-yeol, Yong-soo and Hee-kyung -- work in a shabby five-storey building near an ancient palace in downtown Seoul. Moo-yeol is a cash-strapped instructor at a taekwondo center; Yong-soo owns a comic book store and lives with no dreams and hopes and nobody to take care of him; and Hee-kyung is a taro card psychic, who wins clients with her impressive acting skills rather than with her magic powers. There are many vacant suites in the building, which is on the verge of a collapse. One of the empty suites used to be a credit bureau before its owner ran away. One day, Moo-yeol and Yong-soo receive a request from an affluent lady to find her Persian cat that she lost in the former credit bureau. In a moment of bewilderment, the two take on the role of bureau staff to find the cat but the task proves quite difficult. The owner of the building says he heard a baby-like cry coming from the basement. The fainthearted Hee-kyung takes Yong-soo and Moo-yeol to the basement, where they find the cat as well as three kittens and three leaf-shaped gold nuggets. Ecstatic about their discovery, the three rush through the ramshackle basement but suddenly run across a skeleton. Several days later, Moo-yeol also finds an extremely beautiful woman who has collapsed on the rooftop of the building.

Gasenadi May 13 2012 6:21 pm Agree wholeheartedly with Marg! This drama is truly different and highly recommended. Poignant, too, with wonderful life lessons in an adventure-filled package. Forget the ratings, this was a gem.

Definitely it is worth watching!