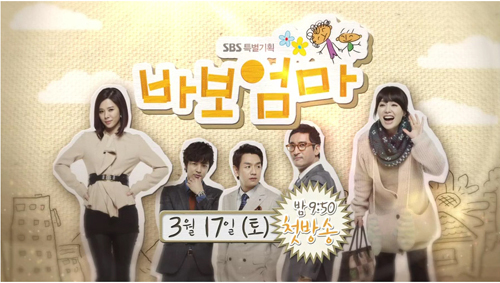 "Foolish Mom" is about the conflicts and reconciliation with a mother whose intelligence becomes lowered by an accident. The daughter looks at her mother differently after giving birth.

Kim Young-Joo (Kim Hyun-Joo) is a fashion magazine editor. Her husband is Jung-Do (Kim Tae-Woo), a law school professor, and she one daughter named Dat-Byeol (Ahn Seo-Hyun), who has an IQ of 200. Kim Young-Joo appears to have everything, but her life is a mess. Her husband has an affair and asks Young-Joo for a divorce. Her daughter blames Young-Joo for their marital problems. Kim Young-Joo also has a family she wants to forget about. Her older sister Sun-Young (Ha Hee-Ra) is mentally slow and her older brother is a troublemaker.

One day before her magazine deadline and her birthday, Young-Joo is busy at work. She gets a phone call from Dat-Byeol's professor. Dat-Byeol erased a file for a team project done by university students and Dat-Byeol. Young-Joo goes to pick her up. Dat-Byeol complains that the other students talk behind her back about their impending divorce. Dat-Byeol is angry at the other students and her mom. When they get home, Young-Joo sees her husband coming out of a room. Jung-Do came home to find some paperwork and didn't inform Young-Joo. Jung-Do also brought Chae-Rin (Yu In-Young), the woman he is having an affair with. Dat-Byeol is happy to see her dad, but when Young-Joo is alone with her husband she becomes furious at him and tells him that won't get a divorce.

When Young-Joo goes back to her office, her boss and co-workers throws a surprise birthday party for her. At that time, a bouquet of flowers with a card is delivered to her from her husband. After her boss and co-workers leave, she sees a sonogram of a fetus, in the package from her husband, and reads a note saying that the picture of his unborn baby with Chae-Rin. Young-Joo becomes extremely upset. She makes a phone call to her husband ...

Nazifa Jul 21 2020 9:13 am Good drama overall. Hated the makjang in the first 5-6 episodes but gets better from there. The relationships formed by the end were very heart-warming. 7/10

yoonharae May 11 2015 5:28 am The story is really moved. I like kim hyun joo's glacial character, i also love park dat byul as she is cute and intelligent