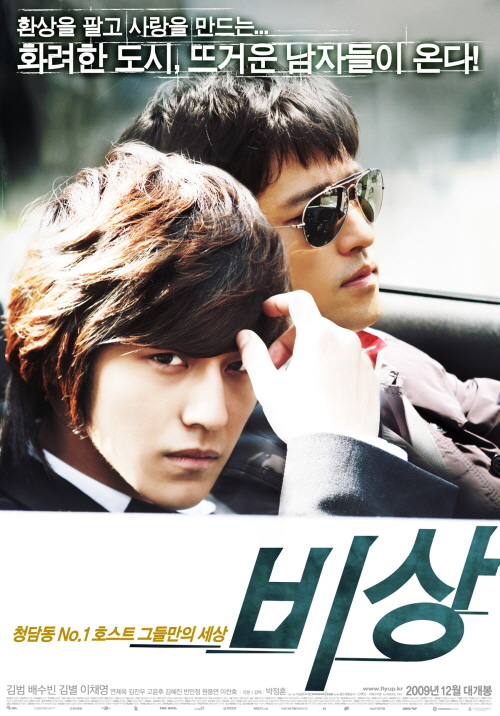 Si-bum (Kim Beom) has a dream of being an actor. One day, he meets a girl Su-kyoung (Kim Byul) and falls in love with her at first sight. With Si-bum together, Su-kyoung seems to get over her pain and also the uncomfortable relationship with her father. But after a while, she has to confront her mother’s death.

To escape from the reality, they take a trip to the sea but then Su-kyoung gets severely injured from an accident. Desperately struggling to save her, Si-bum steals money to pay her hospital and this leads him to work in a bar to serve rich girls.

Now Si-bum uses his acting skill to relieve Su-kyoung and pretends he makes a living from acting. But when he is getting popular, he decides to follow his friend Young-ho to Seoul to make more money. One day he comes across one of his old friends and gets involved in a big fight. 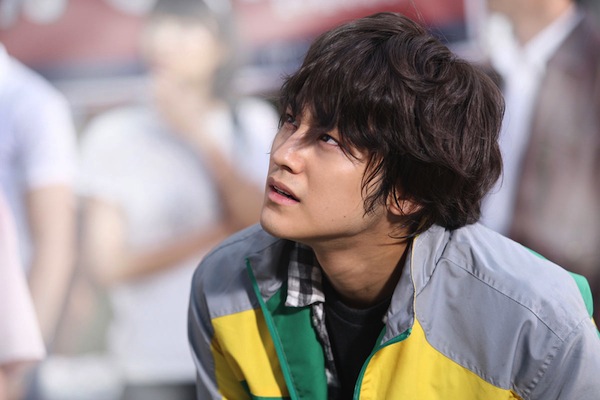 Kat Jul 27 2013 12:41 am Is this movie actually named "Flight?" The description on Netflix has wrong date, description, names, etc. And when I look up "Fly High" from 2006 there are totally different actors on IMDB. I was thrilled to start watching it and see Kim Bum in it and the girl from "Baby and Me", Song Ha Yoon. So it was better than I expected, though i was hoping for a light romp of a movie, and not a downer, but oh, well!! Still well worth watching!

Alyce Jul 15 2013 10:38 am I cant understand this movie. In the description it said the girl was in a car accident. What car accident?

fan Jul 12 2013 3:55 pm This post is just to clarify - I liked this movie. Good acting from the leads, truly. I'd recommend this to anyone any day, frankly, if they like romantic dramas.

fan Jul 12 2013 3:54 pm I watched this movie, and the only thing that held me back from truly enjoying it was my inability to comprehend the ending. This was solely because I was tired as hell (hadn't sleep for over a day), but I can't go back to watch it because my Netflix is down. Could someone explain the ending to me?

Krysa Jun 24 2013 12:44 pm Did I see a different movie? Below I read about excellent movie with great soundtrack.. But this movie seemed like a student or amateur movie and the music was really terrible (except some songs). Yes, the story itself was interesting and good, but I think director and editor must have been on drugs while editing the movie. Poor actors.. Poor Kim Beom - he was really trying hard, but even Oscar winner can not save this ruined movie.

NewKDramaAddict Jan 09 2012 10:13 pm Great Movie! I have been looking for this awhile! Sad ending though. I could not figure out who that was at the end, at the gate.

ForeverLove May 16 2011 3:09 am I cried so much towards the end. The whole film was amazing not a single dull moment. I am now going to buy it. But when watching, watch with at least 12 boxes of tissues. AMAZING actor and actress. For those of you who thought that Kim Bum can only do the "flower boy" role in Boys Over Flowers, think again. He was amazing. I tried to imagine the positive things towards the end. Like that they both get better and run off into the ocean together. Just try to think happy thoughts. It makes it slightly easier not to completely bawl your eyes out.

Wonder Jan 27 2011 11:59 am This movie was very good, not boring at all! However, it is VERY depressing and sad, especially towards the end. Kim Bum was sooo cute in this movie, very rugged ;) I hope he features in more movies! He's a very talented actor. Sorta wish the movie was not so depressing though--I balled my eyes out :(

mikki where u buy the cd

mikki Feb 18 2010 7:37 pm i already have the cd, at first, its kinda boring..... anyway, at first, i also thought that it should be so eun, but kim byeol was an awesome actress and she was really pretty ^_^ i have to admit even though im a true blue soeulmates fan, they both look good together ^_^

but im not saying that so eun is awful either, kim byeol and kim bum looks great together here, but so eun though, i think

meekan Dec 30 2009 7:36 am it should have been the Seoul couple..it's way better for them to have a kissing scene..im sure morea fans would love it