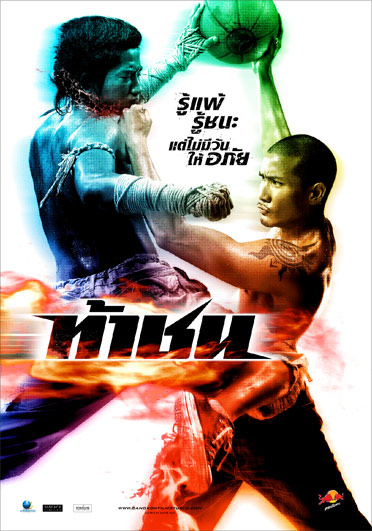 Tai gets out of jail and discovers that his twin brother Tan has been in coma for the past year. Tan had entered the world of Fireball, a violent game based on basketball hosted by underground criminal gangs, so as to raise the money for Tai's early release. However, he was brutally beaten by another player, Tun. Tai agrees to join Dens team so that he can track down the man who hospitalized his brother.

Tai is befriended by his teammates: Singh, a Thai boxing champion who wants to prove that he is the best Muk, a Thai-African guy who needs money to support his family IQ, a cheerful character who only wants to help his mother and K, an old friend of Tan who has a mysterious past. He and his teammates must risk their lives and fight their way to the final round of the deadly Fireball championships so that Tai can avenge his brother on the court.

For “Fireball”, I wanted to make a really good action film like other nations do; practical action cues, a fitting story. This film is an action film mixed with a strong sense of drama. I’d like the drama to generate strong, stirring human emotions.

The theme of this film is that every man on earth has to pass a test: we all need to overcome harsh obstacles, which is an interesting proposition.

Shooting action scenes was more complicated than in previous films I have directed because it is hand-to-hand fighting, not gun shooting; the camera’s movement is very different. Also, when there were emotionally rousing scenes, we needed to get back and focus on directing the actors, and the camera followed. How can we present a character’s emotions as much as possible within an action film frame? I want it to look realistic, I want audiences to be close to the characters and the story, and I also want more complicated fight scenes. This is quite challenging. -- Thanakorn Pongsuwan