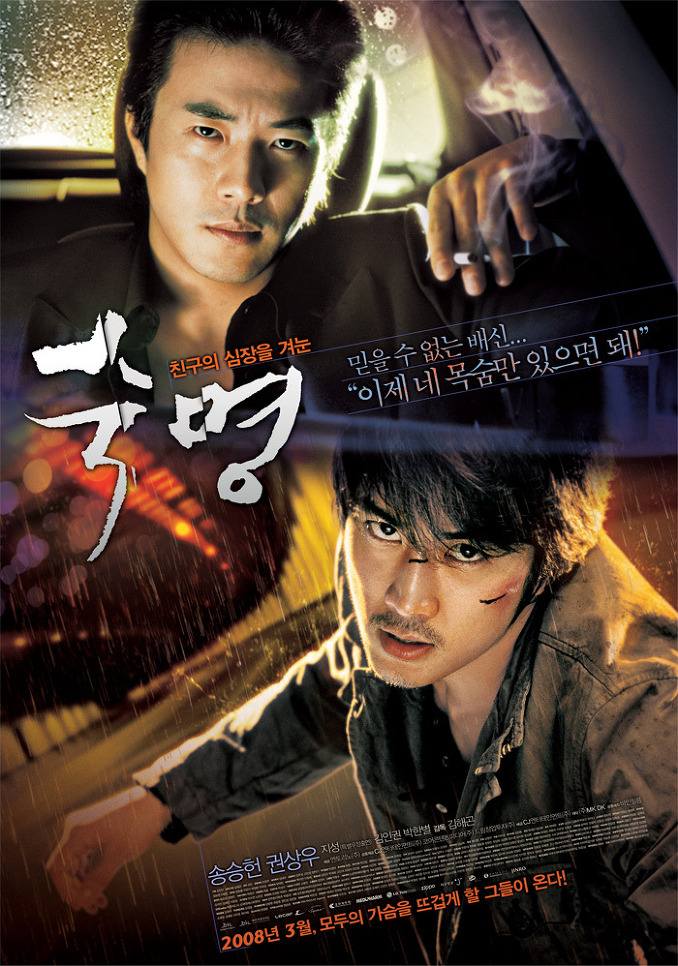 Four friends plot to steal money meant for the rival gang leader with hope of starting new lives. They follow through and succeed in taking the money but eventually get caught by the gang when one of the friends betrays. An arrangement is made so that the leader of the four goes to prison for the rest. However, when he gets out, he finds that the lives of the friends have turned for the worst. He wants to forget about the past and move on but finds himself left with no choice but to revenge. 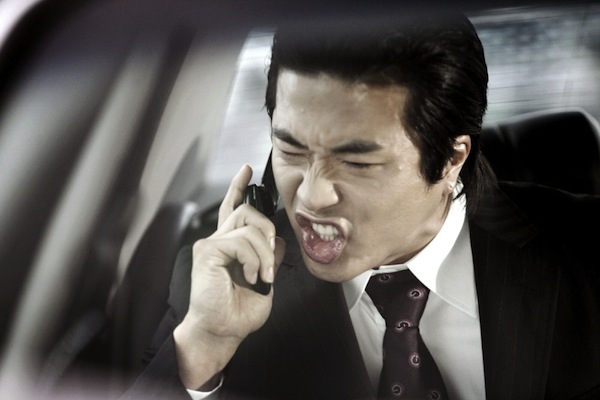 Ki Feb 11 2009 4:23 am Fate is the latest Korean “superstar” gangster/action pic coming out of Chungmuro via Kangnam via Busan and Jeju Island (Busan and Jeju were filming locations for Fate). The film features two popular actors Sang-woo Kwone and Seung-heon Song, both of whom are friends in real life and have appeared together in the 2002 film “Make It Big.” Now, the two stars step out of their nice guy images to portray rough and tumble gangsters set to face off in the final showdown.

In “Fate” four friends rob a casino. The friends successfully make off with the money, but are then caught after Cheol-jung (Sang-woo Kwone) sells out his friends. Meanwhile, Woo-min (Seung-heon Song) takes the rap for his friends and ends up serving 2 years in jail.

Once Woo-min is released from jail, he attempts to make things as they were. Unfortunately, he finds that fate has dealt many unexpected hands. Cheol-jung is now a high ranked mobster that feels threatened by Woo-min’s re-appearance. Do-wan (In-kwon Kim) has hit rock-bottom and is now a hopeless junkie. Woo-min’s former girlfriend runs a bar, but is constantly harassed by the top mobster. Once Woo-min realizes that fate has spun his life out of control, he attempts to take back control by performing one final heist.

Fate is another film molded in the Kyung-Taek Kwak’s “Friend” style of gangster films. You have a tale of paths that diverge only to be reunited years later and the protagonists have to deal with issues of loyalty, rivalry, and betrayal. Of course, you also get ample amounts of metal pipes, aluminum pipes, and kitchen knives thrown and swung around in chaotic gang fights. In other words, originality isn’t a strong point for “Fate.” Instead, the drawing card is undeniably the appearance of two stars facing off as bitter rivals.

Sang-woo Kwone plays his bad guy role over-the-top, often drawing laughter with his pure evil mannerisms. If you’re wondering, Kwone certainly doesn’t have any problems playing the villain. Meanwhile, Seung-heon Song is slightly less charismatic, but always holds the attention of the camera. Surprisingly, the pure character actor of the group, In-kwon Kim, is the weak link of the group. When Do-wan turned to drugs, In-kwon Kim seemed only able to imitate junkies rather than playing a junkie.

The movie itself flowed well during the first 30 minutes. The first warning sign that the movie might disappoint appeared when Woo-min appeared at his mother’s restaurant. For no real reason, except to have a grieving old lady scream at the top of her lungs, we’re introduced to Woo-min’s volatile relationship with his mother. After this painful scene of screaming hysterics there’s nary a mention of Woo-min’s mother again. Other elements that took away from the promising start were way too many one-against-thirty fights (c’mon just tackle the guy for christ sakes!). There’s also the appearance of In-kwon Kim and his awful performance as a junkie. The script itself offered just the basics for this genre.

“Fate” is directed by actor and sometime film director Hae-gon Kim. Kim’s first movie is the completely forgettable “Between Love and Hate” and his second film “Fate” fares only marginally better. If fate is just, Hae-gon Kim should act in a lot more movies and just give up the director’s chair.