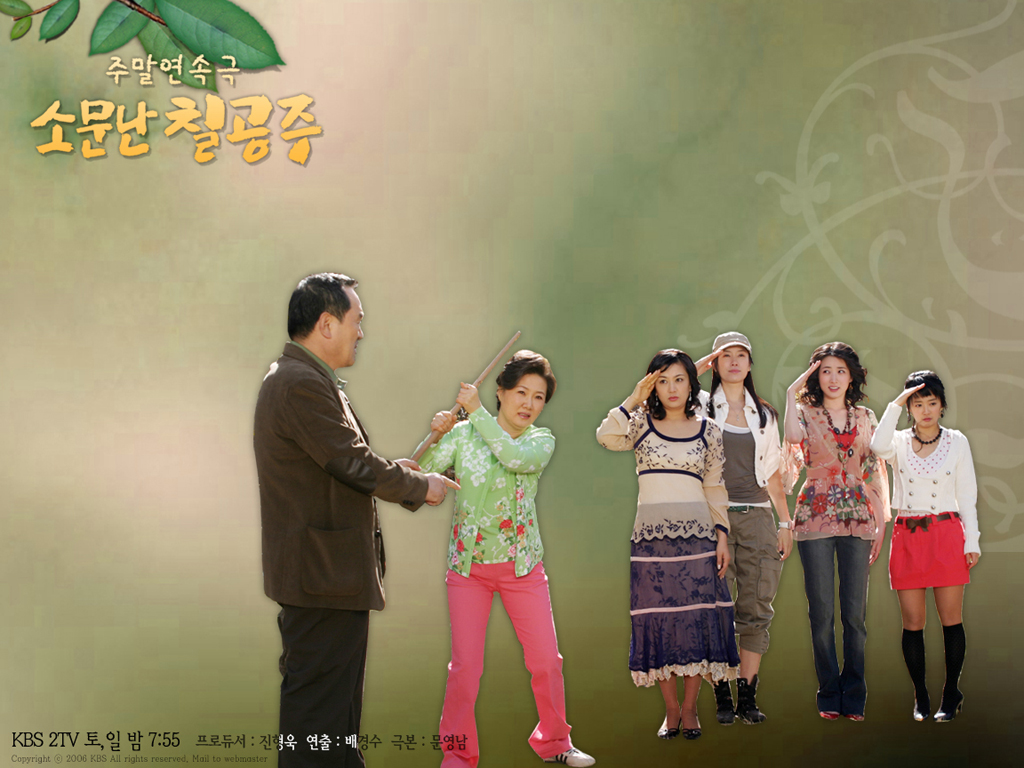 Famous Chil Princesses is a story about four sisters, Deok-chil, Seol-chil, Mi-chil and Jong-chil, whose father is a retired military man. This humorous drama depicts the real-life stories of today's families, eliciting both laughter and tears from its viewers. The life of the oldest sister, Deok-chil, whose unloving husband divorces her, shows problems facing remarried couples. The upbeat and confident second sister, Seol-chil, plays the role of a son to her parents and ends up fighting for love against her younger sister, the pretty but selfish Mi-chil, who is the family's troublemaker. Finally, the youngest of the sisters, Jong-chil, becomes pregnant and marries her boyfriend at a tender age, facing numerous conflicts with her in-laws.

Angel ni PHJ May 08 2021 5:13 am Came here for PHJ. He was so cute and adorable. And as usual, he pulled the roles superbly. I had been into kdrama only recently and came across PHJ and since then I am unable to free myself from this addiction. Everything he does so touches my heart! Didnt realize I could endure 80 episodes just to see him! Am so wanting more of him now!

Rose Feb 28 2021 11:32 am I watched this because of Lee Seung Gi. He was still very young then but he already shown his great acting. Proud of what he has become now.

haejinfever Oct 08 2017 10:07 pm am late watching this simply bc i just learned about Park hae jin after watching Snow is on the Ocean then the rest is history, am still doing all of his projects & albeit there's no Eng subs watching this drama, i didn't even care only bec of Park hae jin! he's so special, i admired a lot of K actors before but i never felt so interested and hooked/addicted i must say to him! He's a great person inside/out and not only bec he's handsome but it just happens to be in a package all together! Love him and he's my current inspiration! :) My day won't be complete w/o searching for him online :) He's so good in this drama considering it's his debut! Such gifted and talented and wish him all the best in his career! fighting! i still hv to watch EOE altho when it aired i watched a few epis but little did i know he was one of the casts and now i will hv to go back & continue where i left off because of Park hae jin ssi! :)

Monino Jun 24 2017 2:42 am I watched this drama after East of Eden coz of Park Hae Jin and couldn't believe that the cute lovely awkward Yun Ha Nam was the same melancholic double-sided Shin Myung Hoon! He was juts a newbie in this drama and he himself criticizes his acting but his acting and Ha Nam's character match so well! And Lee tae ran has also done a great job! Their couple looks wonderful! A serious military woman and an artistic lover boy! Very fun to watch!

Dina Feb 07 2017 9:12 pm I loved this one. Lee Tae Ran was cool, it was so fun and there was even a little self parody at the end. It was really hard to catch all of the episodes back when this was on broadcast TV -- would LOVE for an online service to run it so I can watch the whole series.

Glenn Nov 19 2016 3:52 pm I watched the entire series about ten years ago, For the people who didn't see the whole series, Sul-Chil and her office aide got married; Iihan and Mi-Chil got married. Tae-ja and Jong-Chil got married; Tae-ja got his draft notice and his mother was worried about being separated from her son; Sul-chil invites Tae-ja's mother to her military base and gives her a tour and arranges for Tae-ja to be posted at her base so his mother can easily visit him; the is a funny scene when Tae-ja tries to hide from Jong-Chil in the men's restroom and Jong-Chil charges into the men's restroom after him.

le Jan 28 2016 10:30 pm great drama. i saw some episodes on tv but they quit showing it, so i never got to see the ending. viewers please request this drama on kbsworld's youtube channel. maybe with enough interest they might share this drama's episode videos like they do with other old dramas.