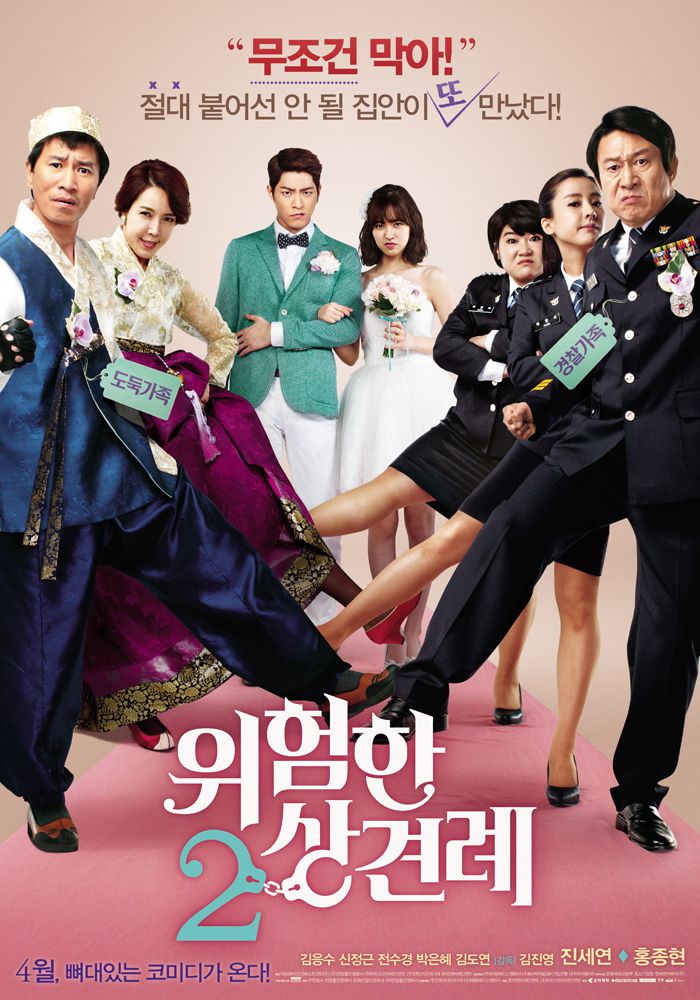 Chul-Soo (Hong Jong-Hyun) is the only son of a legendary thief family. He falls in love with Young-Hee (Jin Se-Yun) who is a police officer. Her family is also a police family. To get her parents’ permission to marry,  Chul-Soo undertakes an exam to become a police officer, but both families work to prevent their marriage.

saku Apr 14 2020 11:16 pm I wish both leads had more scene together. They were barely together in the movie.. But i really like them both. i hope they will have drama together :)

You should watch this btw. it's more of a family drama rather romance.

Nada Nov 08 2019 5:45 am Today is my 4th time watch this my beloved movie. Hong Jong Hyun is indeed good in action movie and drama as well ⭐

Yayayaya Mar 01 2017 11:15 am I don't really like the girl but weirdly enough she always the main lead in movie/drama that I like lol

Angel Zhou Oct 22 2016 7:12 am Whoaaa a light and refreshing movie <3 I love Hong Jong-hyun, I regret that I just discovered him now after watching Scarlet Heart :""") Throughout the movie, I experienced so many emotional feelings. Scenes are greatly captured. Story is well-written. Acting is delivered nicely. The only thing that may substract the emotion and chemistry of the couple was just there isn't enough affection that Young Hee showed to Chul Soo, because yeah they are already a couple in the movie so we didn't get to see how they grow feelings to each other. But because of Chul Soo's tenacy to fight for her, even for 7 years and more, I came to believe that their love is somehow true. I also like that they put some parts of Meet The In-Laws (Enemies In Law 1) movie in that big screen in the restaurant, made me recall the movie and the feelings I had all over again ^___^

[Spoiler Alert!!!] This movie made me cry a lot, very lot. In the beginning, even though there are lovey dovey things, but the movie showed me how selfish the families were, made me disrespect them in any way and made me angry. In the middle, the couple become the focus, here I see more of their affection toward each-other, even though they are not in a good state. And finally, the families experience a change in their heart because of the love that their children have. This is somehow a typical plot for movies like this, but the executions were on point, so markable, and distionctive with any of similar movies you've ever seen. You won't waste your time watching this. Trust me :))

heartskyn Mar 17 2015 10:26 am I love the casts of this movie.This movie is new to Jinseyeon I'm happy she's doing my favorite rom-com nice one :) I appreciate also the team-up of seyeon and Hong Jong Hyeon I like their chemistry, this movie have a good plot and have to potential to be one of the success movie this year to whole production and cast congrats! and goodluck :)

Victoria Feb 09 2015 7:44 am Another movie from Seyeon~ I hope she would get more and more drama and movies~ I will watch it!

heartskyn Feb 02 2015 7:56 pm no matter what you say this movie is interesting and seyeon deserve to shine because she is talented, if you're envy stay away to seyeon I'm sure seyeon ignore the negative comments, please being humble guys keep love in you're heart.

tita balanjiu Nov 05 2014 10:54 am I really love JSY in all of her acting as a young actress she is a very versatile young actress.She can carry and portray all her roles whether young or mature roles given to her. So Good Luck to this new movie Police Family.Pray for your success.....Fighting.

Aja_aja Oct 27 2014 3:04 am I like Seyeon character a lot!!!! she going to play a female police officer who won Olympics gold medalist fencer and also she a leader of Gangnam Police Department's Illegal Drugs Investigation Team. very interesting character XD ..can't wait for this movie come out..so, they start to shooting the movie on 29th Oct right??..fighting Police Family!!

Emma Oct 07 2014 12:38 am Can't wait for this movie came out...Jin Se Yeon will play a lovely and cute lady character :) I know she can do it cause in Inspiration generation also her character is lovely & cute.. For HJH, I watching her current drama "mama", so do not know whether he can play comical role..Anyway, good luck for both of you...fighting Jin SeYeon!!! Fighting Hong Jong Hyeon!!!! Fighting Police Family!!!

kimacK Sep 21 2014 8:57 pm Love JSY. Been watching her dramas and seen her mature from a 17 year old sweet and innocent girl to now a 20 year old young and beautiful woman. She definitely suit rom-com with her bright and cheerful look even though I prefer her in dramatic role. She is definitely one actress to look out for in years to come. Good luck and success to JSY in this movie. Hope to see you back in drama soon.

sukyeonfever Sep 01 2014 7:11 am so xcited for our lovely seyeoni finally a romcom:D Can't wait and tto think of it with jong suk oppa's friend hong jong hyun oppa! haha i guess we could see him go to the premiere nigh! my sukyeon heart! hehe

cisz Jan 22 2014 3:10 am does anyone knows when will it be out on theaters? Im searching about this movie since last year as i thought it has been out on cinemas..please somebody help me know..im dying to watch it..