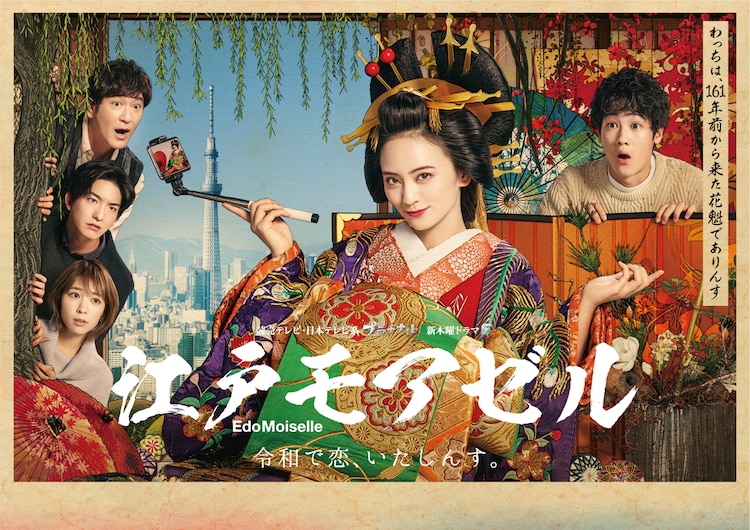 Shunsuke (Shono Hayama) works part-time at a cafe owned by his uncle Takehiko (Naoki Tanaka). One night, a woman, who is dressed like a traditional oiran (high ranking courtesan), appears in front of him. The woman's name is Senka (Yui Okada). Apparently, she just travelled across time from the Edo period to the present day and she looks completely lost. Shunsuke takes her to his uncle's house where he also stays.

Senka stays at Takehiko's house and also begins to work part-time at his cafe. Senka gets people's attention due to her appearance and behavior. Meanwhile, Shunsuke goes to the library to find information about Senka. He learns that Senka was a legendary oiran in the Edo period.

Grandmalee Jun 17 2021 3:23 pm The implausible plot of time travel makes for light comedy that does have its charm. Yui Okada is perfect for her role, though two of the characters seem to change their personalities after the first episode, Izumi Kasuga from a timid office worker to a confident, at times even bossy, woman and Naoki Torii from an arrogant CEO to a more personable suitor of the beauty from Edo. Many components of the drama are sloppily put together to make some of the sub-plots look awkward or ridiculous, but most can be forgiven as harmless efforts to create fun entertainment. Don't we all wish time travel could be so easily figured out with some almanac, a full moon, etc.?

Stan SF9 Feb 10 2021 10:48 pm I love the first ep, the acting is not awkward. But idk if it's Japanese drama thingy but the cinematography and cgi are not the best also the jump between scenes are a little out of place and so many plot holes even in just one episode. I enjoy this and hoping there's an improvement!