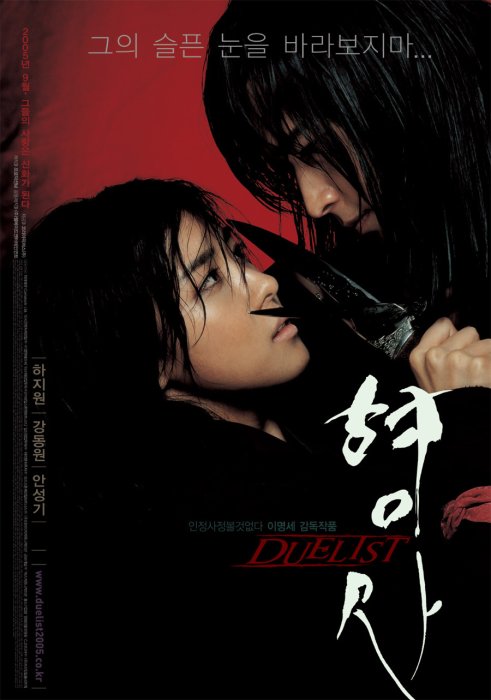 In the late Joseon Dynasty, counterfeits are circulating around. Detective Ahn (Ahn Sung-Ki) of Left Security Station and passionate newcomer Namsoon (Ha Ji-Won) try to trace the source of the counterfeiting. They chase the Secretary of National Security and his man Sad Eyes (Gang Dong-Won]) as suspects. A predestined battle between the best female detective in Joseon, Namsoon, and mysterious assassin Sad Eyes unfolds ... 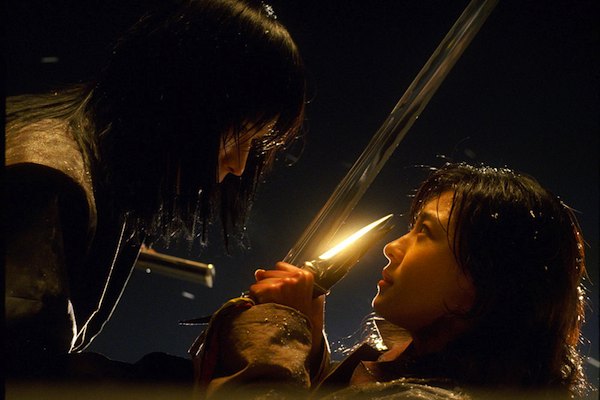 Vesna Dec 26 2021 5:43 am First time, unexpected , before tree days ago, I am waching this movie... all day and night, over and over again.Amaizing acting, especialy Gong Dong won.. Goregeous actor and becaus of them, I am hardly tied for "Duelist". I thought Sad Eyes be out of my mind, I thought it was just a matter of time Till I had a hundred reasons not to think about them. But it's just not so, I still can't let go, and I've still got his face. Painted on my heart,carved upon my soul and my memory, burning on my heart... Also, from then, I looking for Korean movies, I am waching Kundo, and again Gong Dong won doing something splendidly to me ... I don t know, but is something about his eyes... Best regrads from Serbia.

Ivi Jun 09 2020 4:33 am The movie is very dark (visually) but it has beauty in it. And the storyline not really catchy, it is based on the novel. However if you look this movie as an art, this is truly masterpiece. Producers, actors, and all are working together so this movie become on of my biggest admiration towards people in movies industry!

The Raccoon Nov 22 2018 10:20 am Duelist is one of the most beautiful Korean films I have ever watched. I enjoy fusion Sageuk and I truly appreciate all creative efforts behind the film. I have always admired Ha Ji Won's talent in acting and I find her delightful and hilarious in this movie. This is the movie that makes me fall in love with Gang Dong Won! In another 10, 20, 30 years or more, I would still love this film. The chemistry between the lead actors are so electrifying that it left me panting. I know there are many fans who believe that this forbidden love story has a sad ending. Well, please forgive me if I'm being in denial. I like happy endings (I'm from the school of happy endings :D) even though happy endings are probably less realistic than sad ones. My interpretation of the last few scenes might not sit well with the rest, but I'd like to think that somehow Sad Eyes did not die; that the police took him as their own (becoming their spy / undercover agent), that they only pretended to kill 'him' just to give him a new identity, that Sad Eyes and Namsoon become a couple, and that last scene portrayed all three of them working undercover for a new mission. I really wish for Namsoon and Sad Eyes to be together, happily ever after. My heart truly wants a sequel to this film, or even better - a trilogy!

Rockhead Apr 26 2015 4:42 pm Love this Movie I've Watch it so many times and I cant still get over with I Love Gang Dong won and his Sad Eyes and ha ji won she's the Prettiest korean actress for me and they are both Great actors... hope to see them both again in a great series or movies... Ajahh!!!

anasarca Jan 01 2015 5:26 pm The entire movie is incredible. It's layered, nuanced and so well acted. The music by famed Cho Sung Woo just adds an amazing texture to this film. I know it was make after the Chinese film Chouching Tiger, Hidden Dragon, and I do think that style of fighting influenced the fight scenes but that is by no means a complaint. This is a movie that can be viewed more than once because it is very well done.

Capricorn0Angel Jun 23 2014 1:26 pm this movie is truly a masterpiece I am just speechless the whole time never I see this kind of plotting and dialogs, it's genius! can't believe that they made clues here and there. halves are everywhere and it needs skills (of both film makers and viewers) to unify them into one great comprehension Don't worry, slow mo will make you more curious instead of bored, and that's the captivating point of this movie

as I watch it again and again, there appears so many details I never expected before

I may claim this is a 'half' movie (if you know what I mean, for those who have watched this) because half of my heart is left here.

Thanks to all casts and crews; The Duelist made me feel again the feeling when I first fell in love with Korean movies.

Mel Lee Feb 17 2013 8:28 pm 형사 is one of the most beautiful movies I have ever had the privilege of seeing. This will touch my heart for the rest of my life.

NewKDramaAddict Mar 16 2012 3:14 pm One of the best sensual movies without a single kiss ever!! The fight/dance, what can you call them were phenomenal!! It was INTENSE! I loved it from beginning to end! This will definitely be one for my Korean movie/drama collection!

Ji Dec 06 2011 11:51 pm A beautiful movie, I was especially moved during that last scene where they were "sword dancing" together.

I don't really know if he died or not, if that was the truth or not. If he did die, then in a way, that sword scene was like Namsun doing a tribute and expressing her love for him. (Is it true that she loved him? That's what I felt, and I hope it was real.) If he didn't die, as we got to see a glimpse of him during the ending, then perhaps they were really "sword dancing." On that note though, I am doubtful, even though I wish they could have had a sweet ending together.....

I only have one complaint! That is, it's frustrating how we never got to know his name!