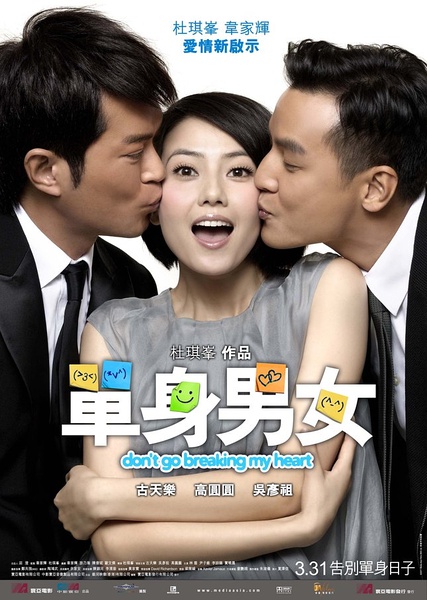 Mainlander & financial analyst Cheng Zixin (Gao Yuanyuan), who followed her then boyfriend Owen (Terence Yin) to Hong Kong, runs into her ex-boyfriend while riding the bus. Owen is now with his pregnant wife and when his wife spots Owen talking to his ex she she freaks out. Cheng hurriedly gets off the bus and, being in a daze, is almost run over by a car. A haggard drunk named Fang (Daniel Wu) then saves Cheng.

Lena Feb 15 2015 8:40 pm After watching part 2 and rewatching this first part, damn she made such a risky choice in the 2nd part of this movie. If I were her, I would have definitely picked Fang Qihong (Daniel Wu).

balang Sep 04 2012 6:56 pm i so love this movie... so creative...we and my cousin almost have a bet on who she will choose...well, for me, she chose the right guy for here... i was surprise to see "Christine" of They Kiss Again here.she had become such a gorgeous and daring woman...

maneki hobbang Oct 10 2011 3:31 pm hilarious. modern. gorgeous actors. i really considered the question: if i were the girl, would i have chosen the guy that she did?

mango Jun 26 2011 7:30 am Without good-looking casts, I think this movie will be nothing. This is supposed to be romantic comedy movie, isn't it? but I think neither romance or comedy is really work here. I don't find this movie to be funny or romantic, I cant really feel the love chemistry between them, it feels unnatural and it didn't make me laugh when I watched this. Though I don't really like it, I watched it til the end, only because of the good-looking casts. This is only my honest opinion :)