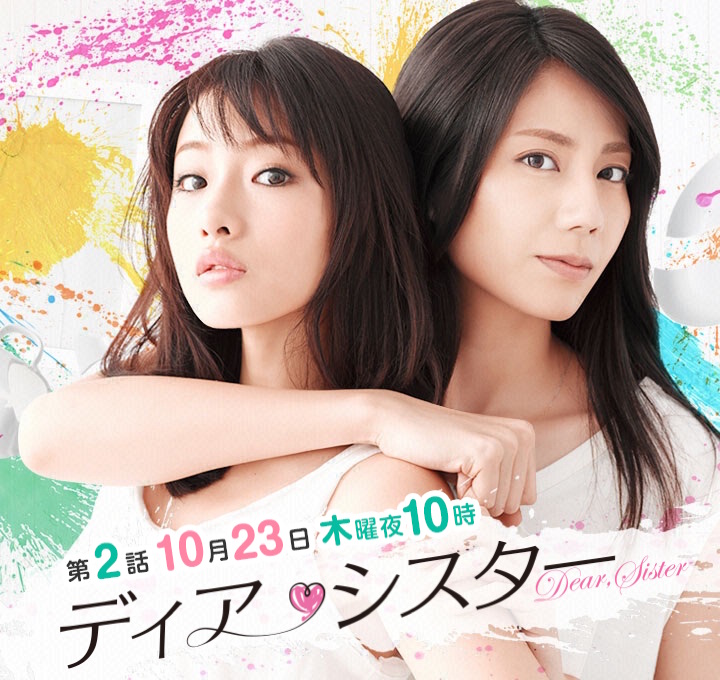 Misaki (Satomi Ishihara) and Hazuki (Nao Matsushita) are sisters. When they were younger, Misaki did not study well, but she had a charming personality which endeared her to others. Older sister Hazuki was meticulous, but she wasn't very good socially. Hazuki was also jealous of her younger sister, believing her mother only loved Misaki. After graduating from high school, Misaki left home and the family has not heard from her since.

Hazuki is now 29-years-old and works at a local government office. Her boyfriend works in the same office and they hope to marry soon. Suddenly, Misaki, who is now 27-years-old, appears in front of Hazuki and they begin to live together. Misaki has a secret that she can't tell anyone.

erheen Mar 04 2019 9:47 am I know i’m too late to watch this drama but i cant resist to tell ya all how i really do love this drama. Sometimes it got u touched, laughed, crush on.. so interesting ad addictive.. plus.. ost is so great..

Jennifer Jan 05 2017 1:07 pm i agree with the comment that said Hiroyuki Hirayama is much better looking than the professor both girls had feelings for! Hirayama is adorable! This was a much better show than I anticipated--really loved it!

Kei Nakajima Dec 19 2016 7:27 am This drama is very interesting . I hope TBS will make a drama pairing Iwata Takanori and Satomi Ishihara again Their fans will be very happy . Waiting for their next drama .

Blairec Sep 12 2016 10:31 am This drama is totally underrated!! Wish i watched tis drama sooner... It's very nice. The story is really something. The plot is good and the actors executed the characters very well.. On a side note, misaki & eito are rly cute together <3 excellent 10/10

calVin Dec 06 2015 7:11 pm this drama ending like antidote to "heartbroken_Chocolatier ending" , Both have same case, The girl pregnant, but one choose to live with her lover and one not .

CalVin Dec 05 2015 4:21 pm I am not satisfied with the ending of the Heartbroken chocolatier "http://asianwiki.com/Heartbroken_Chocolatier_(Shitsuren_Chocolatier)" , but i very like this drama ending.

Zshah Mar 27 2015 10:47 pm i'm into this drama now.. its a really great drama. the cast was great n the characters of each cast is just so amazing! i totally in love with both sisters. totally recommnd for those who searchng for dramas.

Hannasj Jan 06 2015 8:17 am answering to tony Mfellas question, yes Misaki haven't met with Senseii since high school but then they met recently as you can see in episode 2. that episode if I'm not mistaken is not when she was still in high school but they met again when she's 27. and about the DNA, DNA will precisely told you who the father is, there's only 0.0001% possibility that one is not a father when the result match. and DNA does differentiate between 2 men even if they were siblings having the same blood type as DNA is unique to each person. Anyway, this is the first dorama that I've enjoyed thoroughly from start to finish since a long time. the last one being Bitter Blood. Totally fall in love with Eito character, so selfless in his pursuit of love, and not to mention Takanori Iwata is cute. Definitely recommend this dorama to those of you who haven't watched it yet.

Guest Jan 03 2015 1:20 am I'm sorry, but Seiichi Tanabe or Soichiro Sakuraba in the drama is not good looking at all. I don't understand why the girls (and all the high school girls) have such a crush on him. Hagiwara is better looking.

atarujjang Dec 13 2014 6:59 am aaaaa in love with this dramaa <3 seriously satomi ishihara's acting is fabulous as usual aaaaaa love youuu ur the besttt

tony Mfellas Dec 10 2014 11:55 pm I enjoyed this drama very much, but really was confused. . Misaki Fukazawa is 27 years old and has not seen (supposenly) Soichiro Sakuraba since she graduated from high school. She is about 6 months pregnant. so how can Soichiro Sakuraba be the father. Of course I am only up to episode 8. but that dose seem weird to me. Otherwise, the story is very well played.. Anouther thing, a dna test would only prove Soichiro Sakuraba or Eito Sakuraba could be the father, so she would not have to worry. ha

ace Nov 20 2014 9:48 pm I know it is a bit early but I'm pulling the plug on this one. The cast is good and gives good performances. My problem is the script. The overall plot is ok but the execution leaves a lot to be desired. So no matter how good the cast or how hard they try, it still comes off as absurd when supposed to be serious, stupid when it is supposed to be smart and boring when it is supposed to be dramatic. I cannot see a story arc worth following. At 3 episodes in, I give up on both sisters.