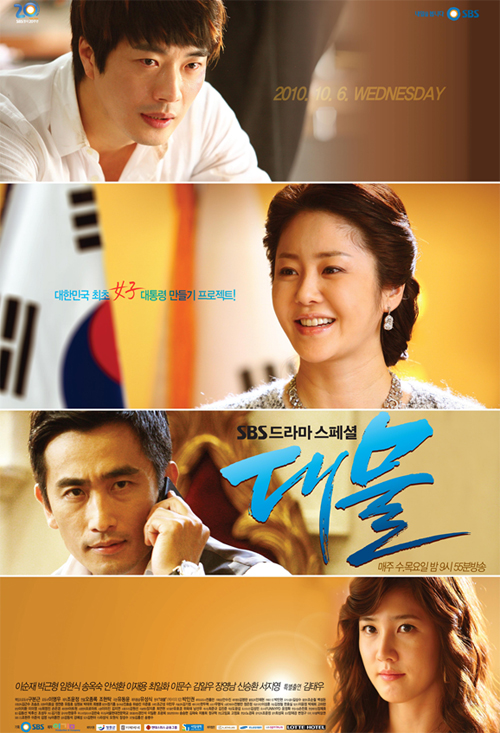 Seo Hye-Rim is a hot tempered woman who works as an announcer at a broadcasting company. Because she protests strongly against her husband's undeserved death she is fired by the broadcasting company. Then by election she becomes a member of the National Assembly for one year. After a success spell as provincial governor of Namhae County, Seo Hye-Rim becomes the first ever female president of South Korea. During her presidency Seo Hye-Rim faces impeachment due to the deemed humiliating diplomacy with China, but she is able to complete her presidency.She receives moral support and love from Ha Do-Ya (Kwon Sang-Woo).

Ha Do-Ya (Kwon Sang-Woo) was a poor high school student, but after watching his dad ruined by a powerful man, Ha Do-Ya studies hard and becomes a prosecutor. Ha Do-Ya now works in a small town with only 3 prosecutors. He attempts to uphold the consciousness of the prosecuting office. He then becomes lead prosecutor to take the case of corruption in political higher power.

Kang Tae-San's (Cha In-Pyo) father attempted 7 times to become a member of the National Assembly, but failed every time. Kang Tae-San then passes the civil service examination and the bar exam with flying colors. For a short time he works as a prosecutor and then becomes a politician. Due to his high ambitions, Kang Tae-San enters a marriage of convenience. His wife is a daughter of a powerful Chaebol group. Kang Tae-San leads the impeachment against President Seo Hye-Rim. Kang Tae-San also has a connection to the death of Ha Do-Ya's father.

Jang Se-Jin (Lee Su-Kyeong) is a gallery director and curator of The Blue House's (President's residence) art collection. She is Kang Tae-San's lover and daughter of Lee Bae-Ho. She later helps Kang Tae-San dethroned Lee Bae-Ho from the chief position of a leading political party.

Arihant Oct 04 2017 4:08 am I'm on a sort of Go Hyun Jung kick and have recently completed What's up fox,H.I.T and now Dae mul.I have successively liked her performances more with each new drama.

Dae mul was a ratings success when it aired and it is easy to see why.It takes up contemporary issues and mixes them up with the rise of a female politician who is a newbie to politics and brimming with idealism and naivete.It is fascinating to watch her growth,struggle with harsh realities and overcoming obstacles,never giving up her principles.She is helped a lot by 2 men,one an incorruptible prosecutor (Kwon sang woo hits it out of the park here) and another , a ruthless politician.

GHJ and KSW love story is kept at he background,treated realistically as you would a love story between a widow with a child and a man few years her junior (who has always loved her) but the show does give them a happy end.

sometimes the politics becomes too much but these moments are only towards the end.I got the feels of watching a frank capra movie from this which is a rarity in this day and age.

joo Dec 17 2015 6:31 pm wow such a great drama.. like others i held off on watching this because it was a political drama but i'm glad i watched it. it's my first time watching ko hyun jung but she kills it!

milliscent May 26 2014 3:10 am Perfect. this drama is a must watch for all politicians and citizens. i really like the role of KO hyun Jung, Her boldness and smiles. She's the best actress ever. Love you.

Ko Hyun-Jung and Kwon Sang-Woo looks very cute together. Well to be honest i didn't watched this drama just to see the political shit, instead i wanted to see the relationship development of the main couple. It just shows how one person can be on the side of the other party they like, when they need them the most. There was a classic atmosphere in this show, which we can notice in old dramas which i liked the most. I think this type of relationship is much stronger in terms of trust. About Ko Hyun-Jung, she is just perfect for such role. Her other facial expressions are very unique. She has this invisible aura which is shining in the dark supporting her. Anyway it was a great drama, its bit long and stretchy but it all works out pretty well in the end.

JC Apr 05 2013 7:10 pm Like the earlier comment had mentioned, if you are unsure whether to give this drama series a try because its theme is about Politics, don't hesitate! This series is so good, you can feel the intensity of the back and forth political battles .. the love lines are pretty awesome too, funny moments, overall highly recommended series!

Kyle Nov 15 2012 2:03 am I have watched several korean drama but none of them left me thinking of as this much. i think every young guys should watch this and get inspired to believe in possibility of doing unbelievable things. as ko hyun jung in this movie, she have chosen to grow in the hard path, not for her but for others! and this great care give her the power to moving forward and nurture a strong determination toward changing the status quo of the korean politics! her sincere feeling and emotion have attracted those who believe in what she believe, this is a gift that made her the most powerful one, the first women president. of course that wouldn't be possible without kang tae san and ha do ya; youth, friendship, kindness, love and ambition was mixed to challenge the status quo! it's just nothing but inspiring.

Gen Oct 30 2012 9:27 pm I am now on the 18th episode of Daemul. Without a doubt, here's a compelling story of an ordinary woman who rose into the political arena with only her wits and her guts, her will and determination- a reflection on how a woman thinks, acts and leads differently from men and how far she can outperform and prove that she's a force to reckon. To explore the possibility of what's its like to have a woman in the highest position, (something that South Korea has yet to experience) is engaging. With a fast-paced story and a stellar cast, the unpredictability of politics and all the intrigue and cut throat maneuver of those who are desperate to stay in power has given me a clear picture. Ko Hyun-Jung as President Seo Hye-Rim now joins alongside with unforgettable women leaders in film and TV and is Asia's answer to Geena Davis' President Mackenzie Allen in the series Commander-In-Chief.

CiCi Aug 29 2012 1:11 pm This drama is another example of top quality film-making, writing, directing etc... I think every high school student in the US should watch this series. It is that powerful and inspirational. If I was an acting coach, I'd make my students watch Ko Hyun-Jung and learn from her. She is amazing and absolutely my favorite actress. Kwon Sang--Woo makes you smile and I am glad that Lee Jae-Yong has finally done a "good guy" role. (that I've seen anyway) Thank you writers for a "happy" "feel good" ending.

Yang Jul 25 2012 10:46 am I thought a drama about politics would certainly be boring but this Daemul totally proved me wrong. Ko Hyun-Jung is an impressive actress.. I saw her in Queen Seonduk and now Daemul, which she portrays powerful woman with great authority. I guess such roles really suits her.. maybe its because she looks really fierce and dependable. Se-Jin, (Lee Soo Kyung's role) is probably the most pitiful person in the drama. She got Kang Tae-San who manipulates her, a father who disown her and even Ha Do-Ya doesn't treat her kindly.

Raymond Boaz Aug 09 2011 4:34 am i love this show so much.. actually im watching this right now.... it was very dominant show. may the whole world must watch this. even im not a korean... im a great fan of the Dae mul cast... all of you are Great.

what can i say? A series with this fellow is always worth watching!!!!

SoFF-OnE Oct 23 2010 12:37 pm watched ep 4 of 6 already..nice story development..ko hyun jung definitely stunning..ranked 1st from first episode..what else to say..only minus?! maybe its about korean politics..but to be fair, it can be any other country too..