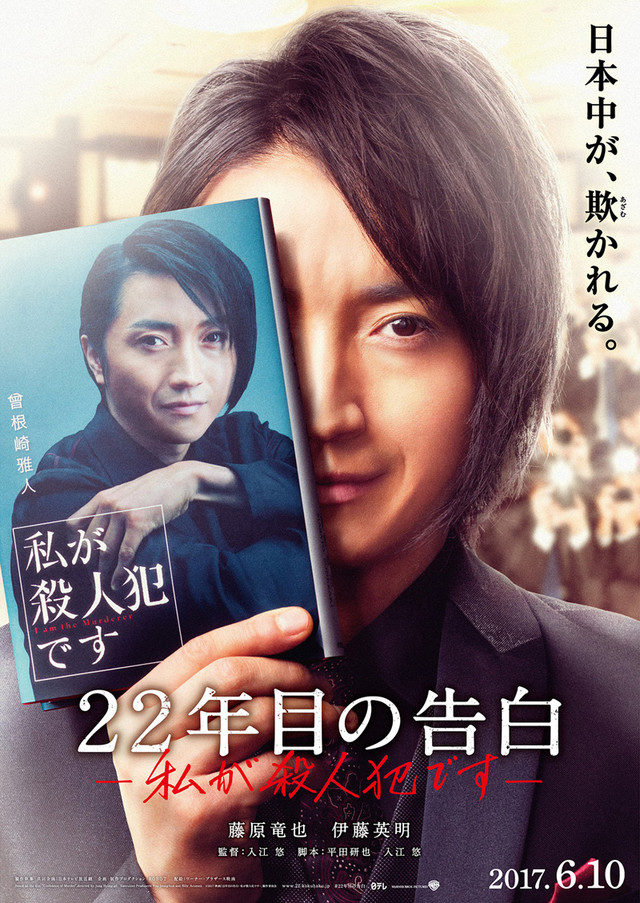 22 years later, a murder memoir "Watashi ga Satsujinhan desu” ("I am a Murderer") is published. The author describes himself as the killer responsible for the 5 unsolved serial murder cases. The author, Masato Sonezaki (Tatsuya Fujiwara), has an attractive appearance and appears at a press conference for his newly published book.

claudia Jul 21 2021 2:49 am @Amy well it's usually easier to do something better if you COPY after others what is more difficult is to come up with your own ORIGINAL idea. But I have to contradict you this version is much weaker than the ORIGINAL one. Park Shi Hoo did a better job in my opinion and I like the original one better.

Tornado Jul 04 2021 7:14 am Oi Beni, you said "What the heck is this movie made like it was made in '90?" Its the style of the director to switch like its in the 90's whenever scenes are in the 90's setting. Its intended to make you feel like you're in the 90's. Stop saying its cheap. Hideaki Ito, Tatsuya Fujiwara and the rest are amazing actors and actresses.

Ana May 31 2021 11:06 am Comparing this movie to the original Korean version is like telling a very bad joke. I can't really understand why some people (actually 4 people: amy, Jun, happy and Lord Kikuchiyo) are saying that this movie is better. I like better the original version with Park Shi Hoo it has better script, better acting, filming, just all is better.

Ovidiu May 23 2021 2:39 am No offense but is a crap movie. I didn't like the way the main character was played. When you make a copy first of all be sure is better than the original one. The Korean version is 100 percent better

Beni Apr 14 2021 11:29 am What the heck is this movie made like it was made in '90? Why they made such a cheap copy? It was so stupid when Masato was talking to Wataru with the hand on his mouth like nobody can hear him WTF? I like better the original one, the Korean version

Lord Kikuchiyo Sep 19 2018 5:01 am I saw both Korean and Japanese version. No kidding, this Japanese version is far better and more realistic compared to the original. I almost forgot that this is the remake version. It really is great, far better than the Korean counterpart, I must say

happy May 29 2018 10:53 pm this is a great movie. the dark theme, the suspense, the twist, the plot, everything was amazing. i know this movie is a remake from a korean movie. i already watched the korean version, the japanese version really does it justice. i love the twist in this version, more plausible, the motive of the killer is plausible. and the last scene didn't end up cheesy like the korean version... i love the closure of it. acting wise: 10/10.. kudos to fujiwara takuya and ito hideaki. they both acted very well. takuya has that psycho vibe oozing out of him, and ito's character (detective makimura) has something the korean's counterpart doesn't have, it's his calmness and composure and not getting emotional each and everytime. cinematography and direction: amazing, the dark tones are what japanese films famous about. it adds more mystery to it.. i'm going to watch this movie again.

amy Jan 03 2018 4:21 am @darrel i disagree. I would very honestly say its clearly not equally good. The motive of the main murderer with book in Korean version was weak in the second act of the movie. Fujiwara of the same character did a lot better here till the end, also more satisfying and did more justice to the character.There are actually lot of things the Japanese version has improved which i want people to find out their own and i don't want to ruin.Overall its one of the better remake out there and everyone who is the fan of the Korean should definitely check out.

Darrel Dec 21 2017 8:41 am Both the original Korean and Japanese version are equally good.

Jun Dec 19 2017 7:25 am For those who haven’t watch the Korean version,I suggest you skip that one and watch this instead. It’s better in lot of ways and great performance by everyone specially Fujiwara Tatsuya.This is one of the best movie from him after playing villain(Makoto Shishiro) from Ruruoni Kenshin (2&3)

amy Dec 13 2017 3:23 am Great movie! 5 times better than the original, actually i completely forgotten this was a remake while i was watching it.

fikuri Aug 15 2016 2:55 pm when i read the plot i instantly remember confession of murder, well it really is,