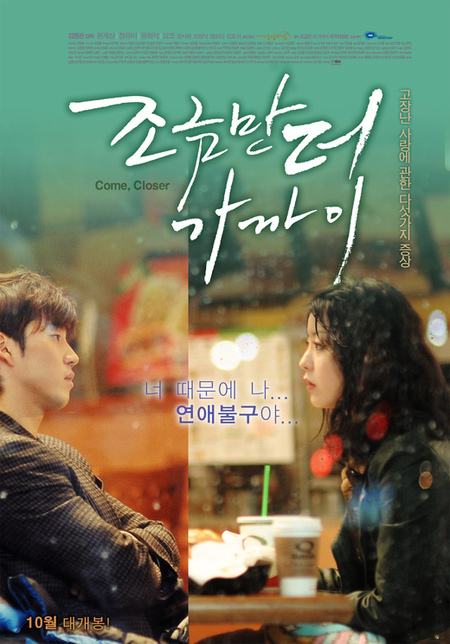 Su-Jin (Kim Hyo-Seo ) works in a coffee shop. On a slow evening, with no customers in the cafe, she receives a phone call from a Polish guy in Holland looking for his ex-girlfriend. Su-Jin tells him she has time to listen.

Hye-Young (Yozoh) is the singer for an up and coming indie band, while Ju-Young (Yoon Hee-Seok) is the guitarist. People often mistake the two for boyfriend and girlfriend.

Hyun-Oh (Yoon Kye-Sang) drives his car out of a parking lot on a rainy evening. Out of nowhere, his ex-girlfriend Eun-Hee (Jung Yu-Mi) stands in front of his car. She then gets in his car.

Young-Soo lays on the couch on his apartment in turmoil. His boyfriend Woon-Chul (Jang Seo-Won) finally comes home after a night drinking with friends. Young-Soo tells him that he is leaving him for a girl ...

danna Jun 08 2011 12:44 am thank you for that very thoughtful insight Ki, and also that picture. I finally got to watch this today and am very glad I did. This has me falling in love with the indie genre all over again. It's a story (or a series of stories) on loving and moving on, simple as that. Highly recommended.

Watched the world premiere of "Come, Closer" at the 2010 Pusan International Film Festival. I was fortunate enough that the director and cast came out for Q&A after the movie. I did think Jeong Yu-Mi was even cuter in person (she is also lot more tiny than I thought).

"Come, Closer" works like an omnibus film I guess, except all segments are directed/written by first time movie director Kim Jong-Kwan. The movie is of high quality, nothing amateurish about it (if you don't mind the occasional shaky handheld camera scene). Especially strong with its performances and the director's ability to elicit personal emotions from the viewers through the movie's storyline. One complaint - I did think Yun Hee-Seok was miscast for the role of the indie guitarist. He looked more like a comedian to me, about to crack up at any moment, rather than an indie pop guitarist. The rest of the cast was superb, especially Jeong Yu-Mi in the jilted lover about to inflict some personal revenge on her ex. With her dyed black hair and black eyeliner she reminded me a bit of Jeon Do-Yeon from "The Housemaid," but played in more humorous tone.

There's also a gay story or should I say bi-sexual story that lies within the movie that's also done just right. Nothing over-the-top about the gay angle. This part fits in perfectly within the flow of the other narratives. There's also a surprisingly graphic sex scene between the bi-sexual guy and his new girlfriend.

The movie is also heavily flavored with indie pop music sensibility. Most notably first time actress Yozoh plays an indie pop singer and in real life she is a singer signed to the quintessential Korean indie pop label Pastel Music. One thing I find at fault with indie music is that its breezy and light, fits perfectly as background music in a cafe, but sometimes lacks the bite or substance to really hang your hat on. "Come, Closer" does proudly wear its indie pop influences on its sleeve (even beyond the soundtrack and actually the way the narrative literally whispers dialogue in your ear like a classic Club 8 track), but the movie also has the substance to linger in your mind beyond the typical 2:30 minutes of a indie pop track. I guess a lot of that comes from the various well-written relationships, with at least one storyline most people can relate with.

"Come, Closer" is like the omnibus movie "Five Senses of Eros" but just way better. Check this out - especially if you like Korean indie films in general. Also fans of "Take Care of My Cat" will likely love this movie.