City of the Rising Sun 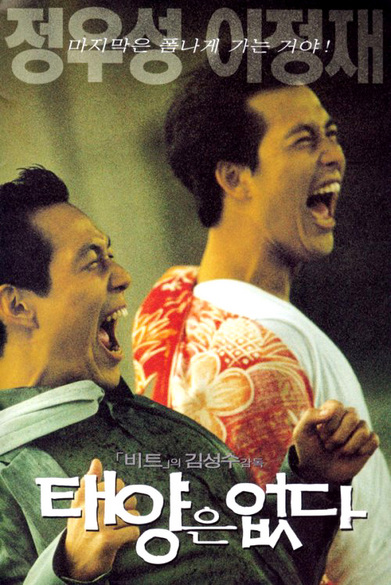 Dochul (Jung Woo-Sung), a tough boxer with a boyish face, dreams of jumping in the ring again for the local title, but his dizzy spells take the best of him with every fight. Hong-Gi (Lee Jung-Jae), his long-time companion, who’s a slick lady killer and con artist, dreams of becoming rich, but gets Dochul into trouble all the time, as he habitually steals and chases after women.

One day, Dochul befriends a foxy model named Mimi (Han Go Eun), who dreams of becoming an actress. They become intimate lovers, but as her talent is overshadowed by her sexy looks, many agents try to take advantage her, leaving Dochul both worried and agitated. The three of them become the best of friends until one day Mimi brings home a wad of cash after acting in a big-budget commericial. With his life on the line, Hong-Gi tries to steal the money to pay off the money he owes to some gangsters, but Dochul catches him in the act and beats him to a whim. Later, Mimi scorns Hong-Gi in front of Dochul, but Dochul shockingly sticks up for his friend to the end. After a heated argument, Dochul bolts out of her apartment in the middle of the night and they separate on bad terms.

Dochul, Hongie, and Mimi all go their separate ways, but Hongie’s wanted life heats up when these ruthless gansters are out for his neck. It’s soley up to Dochul to save him, but he must risk his life once more for a friend who’s betrayed him several times before.