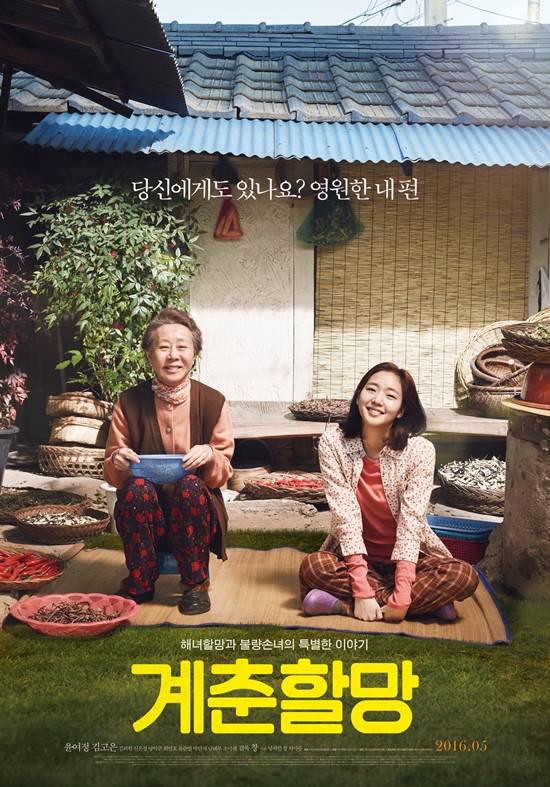 Hiigh school student Hye-Ji (Kim Go-Eun) is a troubled teen with a scarred mind and a secret. She is dramatically reunited with her grandmother, Gye-Choon (Youn Yuh-Jung), after going missing for 12 years. Gye-Choon lives as a hanyeo (female diver) on Jeju Island.

lilian Dec 27 2020 8:59 am yall this movie really good in every aspect. actually deserve an award

Dee Jun 21 2019 12:04 am I admittedly found this movie because of Choi Min-ho but within the first several minutes of the film, I was already in love with it. The connection that grows between Hye-ji and her grandmother is beautiful, the cinematography is breathtaking, and the final half hour had me crying. Some of the characters could have been developed a bit more but the actors are able to portray so much during their scenes.

To those who may not watch it just because Min-ho has such short screen time, it's still well worth the watch.

Rosie Sep 20 2018 8:49 pm Why my eyes are raining? What a performance! Thank you Ms.Youn Yuh-Jung! You are a great artist! I admire you and your skills! You portray each role with excellence! Thank you cast, director, producers and crew for such a great movie!

Daffodils Apr 18 2017 2:50 pm I was browsing for something to watch on my day off and come accross this movie without knowing anything,the story nor the actresses and actors.The first scene was boring but I continue to watched and later i was hooked angry and cried. It was simple story nothing fancy yet very heartwarming and moving movie..not so typical love story so don't expect any romance cause there's none, only a love between a grandmother and granddaughter.I can certainly recommend this movie for those who wants to watch this..

Hana Feb 23 2017 5:49 am I was crying into my pillow when I watched this. Such a heart wrenching film that is beautifully executed. The ending scene had be balling my eyes out.

Regardless, you'll find something for yourself in this family drama.

sady Jan 31 2017 9:18 pm Hahahaaaaa sorryy. but this movie as his debut, minho first debut as an actor right... dont expecting too much girls. just enjoy and appreciate the movie :)) *p.s: im not fans of both kim go eun and minho* he he he

Ana Dec 08 2016 2:06 am very good movie, u can get the meaning and still understand what happen althought there's not much dialogue used, all the actress/actor are amazing, its very touching, and how they (youn yuh-jung and kim go-eun) build their chemistry is excellent.

Tot Oct 29 2016 2:06 am if you desire to watch this movie because you love Minho, don't bother.he has about 4 minutes of total screen time, most of it is just him holding a bike or sitting on a bike and he has very short phrases for dialogue. i was really upset b/c they were promoting this movie like he was really in it and maybe he had a bigger part but they cut it. the movie it self is very, very boring and it's not really good b/c none of the characters were developed. if you want to see minho's 4 minutes just search it up on youtube

chusna Jul 23 2016 7:24 pm I've watched this movie without subtitle. I just tried to understand the storyline. And I think it's very touching. I am still waiting the subtitle of this movie because I want to understand more about the story... I love you, Kim Go Eun..fighting :-)

vmarlany Jun 10 2016 1:38 pm i will certainly watch it because kim go eun is the female lead. i love her acting. fighting unnie.

tabbat Mar 03 2016 3:51 am Exited for this movie, coz' got the chance to see RJY acting before his Reply 88 stardom...Really love KGE acting, loved how she choose her acting project. She definitely looking forward to work alongside with really awesome senior actor/actress.

choigranger Jan 21 2016 12:18 am uri actor Minho've improved a lot. hope ur movie debut will get positive review. it's good if the movie become a hits hahahaha

TGG Aug 19 2015 4:06 am I like this unni ( Kim Go Eun ) more and more first she accepted the role in Cheese in The Trap, she will play with Park Hae Jin ( my favorite actor ) and now she is acting in this movie with Minho oppa ( my bias )

Arina Jul 07 2015 3:18 pm Good luck my awesome actor Minho! You will do great in your first movie and I can't wait to see it! Love you sooooo much!