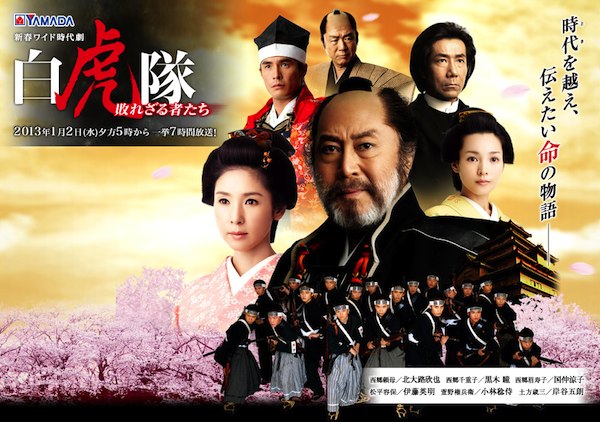 Daimyo of Aizu Katamori Matsudaira (Hideaki Ito) is appointed to the unfamiliar position of Kyoto Military Commissioner and then goes through the Boshin War. "Byakotai" depicts seven years, from 1862 when the tragedy begins to 1868.

In the last days of the Edo period, chief senior councilor of the of Aizu, Tanomo Saigo (Kinya Kitaoji) lives frugally and happily with his wife Chieko (Hitomi Kuroki), his parents, brother and children. He also trains young boys. Things change in 1862, when Katamori Matsudaira is appointed as the Kyoto Military Commissioner. Around this time, the Tokugawa shogunate's dignity means very little, with ronins of Sonno joi gathering in Kyoto. Consequently, public order and security crumbles in Kyoto. Under this situation, the Tokugawa shogunate creates The Office of Kyoto Protector to regain control of the area.

KuroshitsujiMusicalFanGirl99 Feb 23 2013 12:58 am This was released 17 days before my birthday (this year) that's now two movies that have been realised this year close to my birthday.