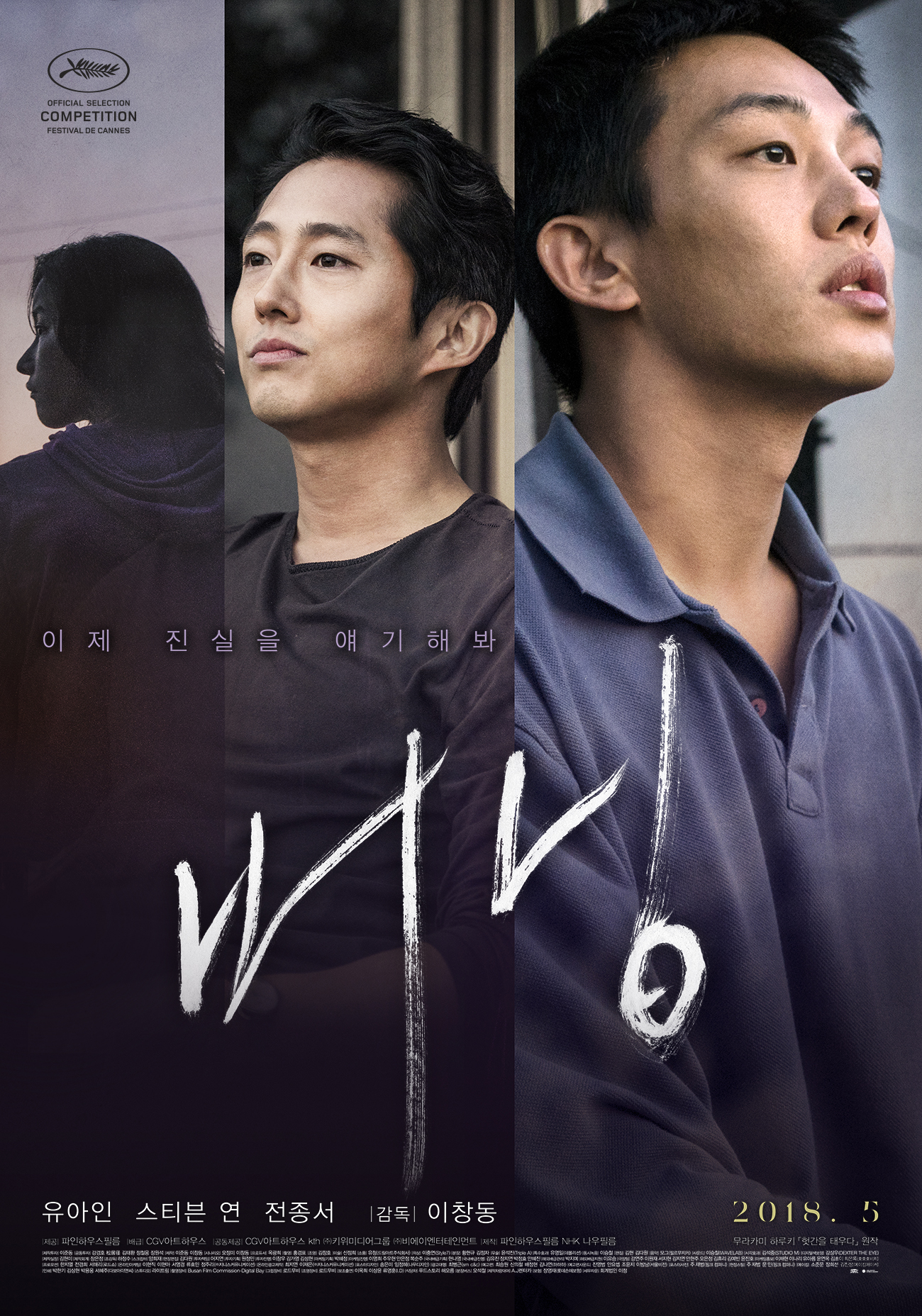 Jong-Soo (Yoo Ah-In) wants to become a writer, but he currently works part-time as a delivery man for a distribution company. While on the job, he runs into his childhood friend Hae-Mi (Jeon Jong-Seo). They grew up in a small rural town. Later that night, they meet for drinks. Hae-Mi tells Jong-Soo that she will be traveling to Africa soon and asks if he can stop by her apartment and feed her cat while she is gone.

Later, Jong-Soo receives a phone call from Hae-Mi asking if he can pick her up at the airport the next day. At the airport, Hae-Mi introduces Ben (Steven Yeun) to Jong-Soo. Hae-Mi and Ben met while in Arica. Soon, Ben tells Jong-Soo about his hobby.

whynot Jul 07 2020 12:31 pm the more I watch this movie the more I understand why it made such a deep impression on western critics. it is deep, gorgeously acted and shoot, and has so many nuances .... this is truly a masterpiece. it is slow and slowly and subtly growing on you, drawing you to immerse in it in the most subtle and deep way. however, do not watch it if you like dramas like DOTS, Boys over Flowers, Secret Garden.

Oliveoyl Apr 03 2020 4:22 am Agree with AMAW's comment below, yeah I enjoy this movie because of Yoo Ah In's acting skill. The story is flat even though there's some part which can be escalated to create some emotion spikes, but it let passed.

whynot Jul 11 2019 6:49 am this movie is really good. slow indeed but not a dull moment. the acting is amazing. i wanted to see the movie for yoo ah in (i think he is an amazing actor) but was deeply impressed with both Jun Jong-Seo ans Steven Yeun. In fact I was so impressed with Steven Yeun acting that I watched The walking dead just to see him in another movie. So, this movie is wonderful but like most of YAI's films, not the usual korean drama.

Jinjoo Jul 04 2019 9:35 pm i always like Yoo ah in & his projects were quite outstanding like this one! it's kinda baffling though what happened to the girl hae-mi i believe we just hv to conclude it ourselves that she was killed by Ben? oh well still wonder why this made it to Cannes? i may be wrong but it's really not that great a story!

N.K Feb 09 2019 12:08 am @amaw It was like japanese style because it was base on the story of Japanese writer Haruki Murakami. It will ruin if it adapt into korean style. Not for normal k- movie fans.

amaw Jan 19 2019 5:10 pm This was like a Japanese movie. Unlikely for you to like it if you are accustomed to other Korean movies. It's too long and there's a lot of almost idle moments. It's like a simple story stretched for so long and made vague for the artistic thrust.

There's no roller coaster of emotions. There's even no climax, arguably. I'm not sure about the resolution. There's mystery but it's not the engaging kind. It's a movie created for the solid fans of the actors.

Constanza Nov 24 2018 4:11 pm I went to the movies just to see another amazing Yoo Ah In performance, but then I was blown away by Steven Yeun acting. I think he deserve more recognition. Before this movie he was just the Walking Dead guy to me, now he is a great actor whose works I will make sure to follow

Something in the rain Oct 25 2018 12:44 am This movie will be in cinamas in Romania on 28 october and im going with a korean girl that i just meet at a kpop dance contest. Was she's so cute~~just like in dramas

anonimo Oct 17 2018 8:33 am well done...I don't get anything make me wonder with this movie, first, in beginning I think this really interesting, after that looks bored.. the story is good, creates a sense of mood and place and some scene made deep feel.. but in the end want to make audience ask what happened?!, this only waste time..

Migthy Thor Aug 27 2018 6:10 am Yoo Ah-In is one of the brilliant young Korean actor there is today. Most of his projects are tragic or sad in ending but very deep in essence. And I read from the comments of the site I watched from, is that most did not appreciate this film. Well, this movie is not the typical serial killer movie that is full of action and has a fast pacing. the writer of this movie took another route that is not common and typical of a serial killer movie. One has to have brain and patience and passion to be able to appreciate this movie. If you lack the ability to be creative and think and analyze then this film is not for you. This movie is deep and requires a certain level of IQ and EQ.

Selvinaz Apr 05 2018 12:24 am Tell the trut!! Woow mysterious. Cant wait, his acting is so Good. Soundtrack will be Great. Oppa fighting.

Also, I actually just realized who Steven Yeun is. This movie is gonna be a big hit :D :D