Bring on the Melody! 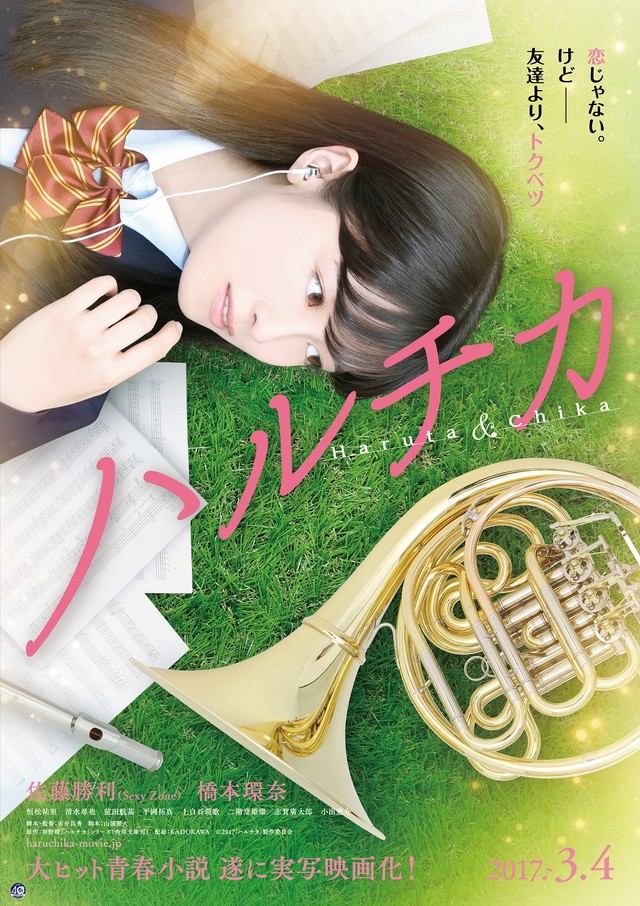 Haruta (Shori Sato) is handsome and smart, Chika (Kanna Hashimoto) is bright and naive. When they were children, they were friends until Haruta’s family moved away while he was in the 3rd grade. They meet again during a high school entrance ceremony. After all of these years, Chika is eager to join the wind instrument club. Due to an incident, the wind instrument club is about to be disbanded. Chika can't give up the flute so she attracts Haruta to her side and tries to recruit members from the wind instrument club. The group attempts to solve various cases taking place at their school while they plan to take part in a contest.

Sebutir Marimas Sep 17 2019 6:23 am I AM HERE FOR SHORI SATO. I LOVE HIM SINCE 49 DRAMA. YOU ALL SHOULD WATCH HIM TOOO I LOVE HIS DUALITY IN THAT DRAMA. SORRY FOR CAPSLOCKING, I AM REALLY EXCITED ???

BOTM ❤️ Jan 11 2018 10:38 am I first found this on an airplane flight on the TV screens. I watched and absolutely loved this film. To this day, it is still my favorite. I have watched it over 20 times now. I was wondering if anyone knows how I can contact the director as I would love to send a message to him/her. Thank you for making this. It literally changed my life. Much love, BOTM

kiraa Jan 05 2018 1:52 am the ending was so cute and i think all the cast did a great job. Also the ending was really cute and I was surprised that they decided to put a small lgbt element in at the end. It was so good. I am definitely going to watch several more times

ulweiya Dec 07 2016 3:55 am i kinda agree with @nocturnalux. anyways, they seriously strayed away from the original story line. The anime was more of a mystery based kinda anime, where they actually solve mysteries and strengthen their bonds as a club. Haru and Chika are also both fighting to get the teacher as both of them are in love with him. But in the movie, the genre focuses towards romance instead. And they are trying to potray the romance between the two lead roles. Well, maybe itll still be interesting? Since, its not the typical kind of live action movie that literally follows the anime/manga storyline. Nonetheless, even if there are major changes, im just really excited for Sato Shori to be leading in this movie because i have no doubt in his acting . Anyways, all the best !!

bon bon Nov 23 2016 10:49 pm Kanna and Shori looks cute together. They both have excellent looks and they look good onscreen.

Kanna had developed her acting skills well and Shori even not having any acting project for quite some time, I still have faith in his acting.

I havent really watch the actual anime so I'm really excited for this. Ganbatte!

Nocturnalux Oct 24 2016 9:06 pm I'll wait to see if they keep the gay element intact as that is pretty much fundamental to the entire franchise. Not to mention that having actual positive gay characters is something Japanese media is in desperate need of.

hannasj Oct 02 2016 9:32 am hmmm seems like they are straying a bit from the original story line if you know what I mean. Because it seems to me that they're subtly trying to sell the romance between Haruta and Chika from this trailer. Not that I have anything to complain since both Shori and Kanna look cute together. And I'm not really a fan of the original anime storyline either. So this is as good as it can get for me. Looking forward for this movie.

Kitty Mar 23 2016 8:01 am OMG!! Sato Shori and Hashimoto Kanna??!! Both are my favorite artists so i'm very happy that they will acting in same movie