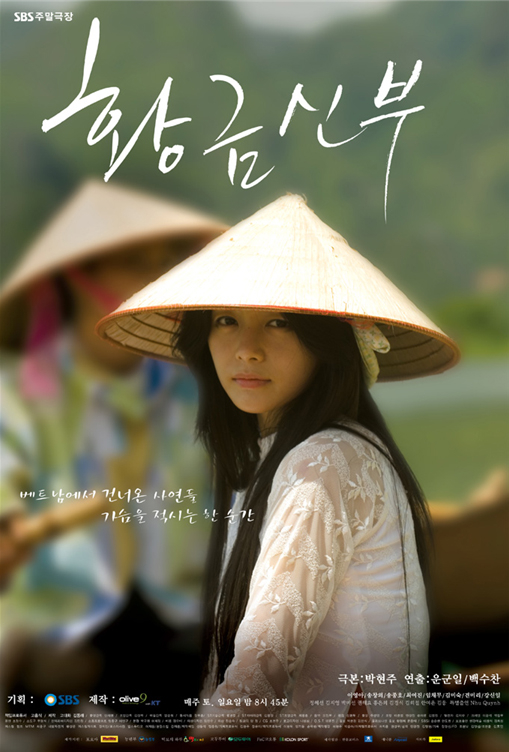 On the street of Ho Chi Minh, two people stand out in the crowd, Han-sook (Mi Sook Kim), and her sister-in-law, Gunja, who have come to Vietnam to find a kind, naïve girl to marry Jun-woo. However, they can’t find anyone they like, and as they are about to give up, they are approached by Jin-ju who asks them to take her instead. Han-sook likes the fact that Jin-ju’s father is Korean, and decides to take Jin-ju as her daughter-in-law. However, Jin-ju, who is half-Korean half-Vietnamese, has decided to marry Jun-woo in order to find her birth father. A month later, Jin-ju, who pretends she’s Korean who grew up in Guam, comes to Seoul and marries Jun-woo. Jin-ju meets Jun-woo for the first time on the day of their wedding and falls in love with him. On their wedding night, Jun-woo tells Jin-ju that he cannot love anyone. Jin-ju is heartbroken but begs him to stay with her for at least two years until she gets a green card. Jun-woo agrees to this “contract-style” marriage under one condition: that they do not fall in love with each other…

Anh Minh Aug 25 2021 9:33 am All of my childhood was here, I was impressed in the chemistry between Chang Eui and Young Ah, they are beautiful couple, this film was also set in Vietnam, my country, which made me much enjoyable watching, I love it

Netizenjugak Jun 02 2017 4:28 am such a waste drama.. the heroine spoil this drama.. sorry to say but she didn't make me feel sympathy, instead I feel annoyed for her..

Pammo Aug 05 2016 9:29 am I marathoned this drama over a week. In the beginning I was drawn to the story line. But as the drama progress it became tiring and repetive. In the end I hated every character -- most of all the so called Golden Bride.

Spoiler: For someone who stopped crying because of abuse when young -- why does she cry almost 50 episodes - She was pitiful and her persistence was annoying beyond annoying. 20 episodes of this hot mess would have been fine - but 64 -- waste of viewers time. Offensive to anyone of mixed blood or heritage -- abandonment and rejection and death of a parent was poorly dealt with by the writers. Viewer beware

D Nov 09 2015 8:35 pm @Nora spot on....One of the most annoying actresses. Loved the drama with the exception of Lee Ah Young...The facial expressions and crying along with her voice way too much

pearl Jul 14 2015 8:52 am i'm so loving this drama, i luv song chang ui & lee young ah's chemistry, this will be one of my kdrama favorites of all time! i can't stop watching though it's a very long drama but worth it! i give this drama 2 thumbs up waaaaaaaaaay up!

alee Apr 06 2014 12:53 pm Actress Choi Yeo-jin is so unattractive plus her over-acting make her a "villain to hate." This is the first K-drama where I absolutely could not muster any sympathy nor pity for a Villainous Character. The acting of the rest of the Cast was good to excellent. I was very surprised at Ahn Mi-na's acting … really very good. As for the drama itself … a bit dragged out (boring) in parts, especially the parts/scenes involving Won-mi and Donggoo … but, overall the story really pulled me in, due to above-average script.

John Oct 26 2013 3:49 pm I enjoyed this drama. It isnt one of the best, but not bad either. The relationship between Sae Mi and Joong Su is a bit too much. In spite of everything Joong Su is incredibly immature and insensitive and it is impossible to accept that the character Sae Mi could pine for him for so long. He deserved a swift kick and not obsessive attachment. Although this story is full of strong emotions and a lot of tears for some reason it didnt wash with me most of the time as it has with other dramas. Not sure why.

Cosmos Aug 26 2013 4:52 pm @thoa, as this drama has received a fan approval rating of 96%, your opinion apparently has as many issues as you appear to have. No one (in their right mind) is going to mistake fantasy for reality just as insulting one's hosts as unlikely to get a person invited back into the party. Don't let the door smack you on the behind on your way out....

thoa Feb 04 2013 2:59 am This drama sucks. The way they portray a vietnamese women sucks. they should have a voice over for lee youong ah instead of her speaking Vietnamese.

Blubbi Oct 09 2012 7:48 am Nhu Quynh is such a famous vietnamese actress! This drama is definitly awesome!