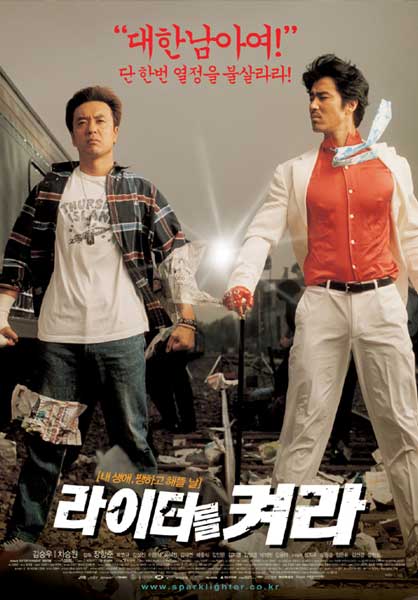 A pathetic low-life HUR Bongu (Kim Seung-woo), who still steels from his parents meets his day of disaster. Nothing ever works out from the beginning for Bongu. Having gone to the reserves training, he's only left with 300 wons in his pocket and unexpectedly ends up in Seoul station, where he leaves the lighter in the bathroom.

Bongu finds the bathroom again. But the lighter's already in mob boss YANG Chul-gon's (Cha Seung-won) hands. Chul-gon, who's been living on congressman Park's payroll by helping him out through his campaigns comes to Seoul station with his men to get once again acquainted with Congressman Park, who's been avoiding him for a while. Bongu gets beaten up for trying to get his lighter back. He gets on the train just so that he can get back the lighter and dares everyone.

As soon as the train goes past the Seoul station, Chul-gon begins his plan! Chul-gon asks Congressman Park for money, but things get slightly more complicated thereafter. Worried about fuss on his past, congressman Park doesn't let up easily. Chul-gon then takes over and kidnaps the train in an attempt to get his money. The whole train turns upside down.

With hundreds of hostages held on the train, police force is spread out all across stops along the rail line, but Chul-gon decides to run through the stops non-stop. HUR Bongu insists on getting his lighter back from the mob boss Chul-gon amidst all the trouble on board.

HUR Bongu vs. YANG Chul-gon. The high-speed match up. Will Bongu win his ligher back?

Diane Robinson Mar 20 2021 11:17 am I can't figure out if Ji Ming (autistic boy) lives or does, I thought the virus was just remembering, but a friend thinks differently