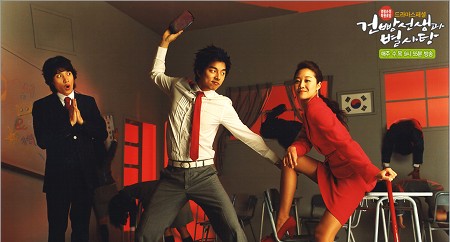 A tough teacher with an attitude and her cute student have an exciting time at school.

Na Bo-Ri(Kong Hyo-Jin) was a legend in high school for being a troublemaker and getting into fights. Then one day she gets expelled from school for being involved in a fight. After overcoming numerous hardships, she gets a job as a substitute teacher at her old high school. She is excited with the fact that she will be able to meet her old teacher, Ji Hyeon-Woo(Kim Da-Hyun), whom she has had a crush on for years. But a womanizing troublemaker in her class, Park Tae-In(Gong Yoo), keeps getting her into trouble. Tae-In is a smart and an athletic student. From Tae-In’s point of view, he dislikes Bo-Ri because she isn’t smart, but at the same time, has a headstrong personality. As his relationship with his teacher turns for the worst, he gradually becomes attracted to her through a series of complicated events...

Jiyuu Jul 17 2020 4:54 am I've been avoiding watching dramas from more than 10 years ago but out of curiosity I made an exception for this one (and Brilliant Legacy/Shining Inheritance) and I'm glad I did.

Sure, it's not perfect. The fashion and camerawork are outdated. Wanted to shake Biscuit a lot in the first few episodes. And I fast-forwarded through some parts involving the students' lives (not as good as Gokusen) and most parts involving the "dry as a dishwater" second lead (the role, not the actor).

But man, Gong Hyo Jin and Gong Yoo together is such a sweet pair. I enjoyed all their moments and it's what makes this drama such a gem. So much so that I know I'll be rewatching it again even in crappy, illegal sites (since it's not available on Netflix, Viu or Viki).

AuroraKoreanWorldEntertainment Jan 13 2020 3:19 am Ohhh...2020: I got a shock to read the harsh comment given by one viewer (though long long long back: I thought maybe I should leave a comment for future commenter and viewers). Obviously very obviously he didn't double check from his own country, there are tons and tons of drama and movies made in this type. It's the same all over the world. 2005 or 2010 or 1995 or 1990: human relationship are the same around the world, it's way too complicated. But I totally enjoyed every bit of it, whether now, some of the scenes or scene situation made sense or not, it doesn't matter.....because love the whole cast and crew :) :) :)

Raeshinye Oct 29 2019 3:03 am I love the drama! Hope to see Hyo Jon and Gong Yoo in a new drama again. Their chemistry is unbelievable!

Mari Jun 04 2017 7:08 pm So it's 2017 and this tv series was made back in 2005. I have this to say though, student-teacher affairs happen...and I know of two relationships which ended in successful marriages. Anyway if you're looking for entertainment this series satisfies. It has many layers and stories and lessons. It also has its shortcomings. It isn't perfect, but I truly enjoyed it. It made me laugh (many times), cry and angry. Watching this made me remember the good times I had in high school...discovering the wonders of falling in love and staying in love and knowing how to love unselfishly.

Sanjay Feb 13 2017 1:45 pm A student and teacher loved/loves each other, after 6 years that student came to the same school became a teacher and fall for love with another student who is also nefew of his first lover...

Gywin Jan 27 2017 10:51 am Dont be stupid it was made in 2005 your country's films or movies mustve been pretty much bad or way worse than this drama can be. For a 2005 drama, it was made pretty well not to mention most of korean dramas were made like this. Its actuslly same try to watch others lol complaining much for 2005's is pathetic guys come on.

[] Jan 03 2017 4:10 pm Before making the critic or reading the old comments, I suggest you to remember that this drama was made back in 2005 when the actors and actresses still were still improving, and don't complain about the fashion because that was what on trend back then. Plus, each drama has its own plot if you're not a fan of student-teacher relationship then you shouldn't have watch this drama from the start. So don't complain about the drama being creepy. And, it's not the actors or actresses fault for the story plot or the character's personality. They are just doing their job, portraying the writer's character as the script or planned.

Riaaangg Jan 15 2016 3:33 pm I watch this drama because of gong hyo jin. I've watch most of her recent dramas and she's stunning. She act naturally and charmingly in every character she played and she always choose great drama to play in. Pasta, master's sun, it's okay that's love, and the producer, I love them all. So I watch this drama with high expectation, but man i can't enjoy it no matter how much i love gong hyo jin. Forget everything that might be lacking, but i really can't stand a female lead that doesn't know the right thing to do and always gets herself on trouble. Gosh, I can't even passed myself episode 2. Maybe GHJ still too young back then? Idk. But i heard her other old drama called Thank You is quiet good. Gonna check them out

lalala Nov 03 2015 12:08 am Well, I must say i pretty like this drama, and I am very, very picky with my comments, likes, and critics. Yes, this shows drags at some point but that is more a director and edition issue than script and acting. Furthermore, this is a piece that was filmed and acted in 2005 and it will have the same characteristic of pieces done by that time. As an example, our favorites actors and actresses are still honing their talents, skills and names by that time and maybe that is way some of us may feel they acting a little bit wobbling and that is because we know how well they can act but again, this was filmed in 2005!.

Just be more understanding, you can not expect the same quality of filming of today's mini series when people did not have the digital technology nor the budged to make the series as you like it.

Beside, it not fair to our favorite performers, just enjoy the road. Enjoy the piece by its essence and documentary value.

MJ Feb 04 2015 9:29 am The drama is a bit disappointing. It starts out pretty interesting, but quickly turns into a one-sided love stalker drama until episode 15. This drama actually tries to put a positive spin on teacher/student dating. The writing and portrayal of the Tae-In character is annoying. It doesn't help the actor is actually older than the actress playing his love interest, who is supposed to be 6 years older. He often has this silly grin that makes him look mentally deficient. The character doesn't show much personal growth during the 7 years he appears in this drama. He has a real me first attitude throughout.

I would think this would an odd drama by American standards having a high school student and teacher being so touchy feely with each other. It was almost okay as a one sided crush, but having the teacher return the romantic feelings makes it kind of creepy.

I liked the fantasy martial arts sequences with Gong Hyo Jin in the early episodes, but that seems to get abandoned quickly and the Bo-Ri character becomes quite weak as the drama continues.

The choice of when certain music is played and the 1960's-1970's fashion style is also jarring. Way too many bellbottoms for a drama that's only 10 years old and not a period piece. The guys all look like dwarves with stubby legs.

This would have been much better if they had focused less on the Bo-Ri/Tae-In "romance" and more on how Bo-Ri helped the other members of the class find their calling. Unless you love watching Gong Yoo run around and make goofy faces, I wouldn't really recommend this drama. If you're of Gong Hyo Jin, watch the first four episodes and quit. It doesn't get any better after that.

lola Sep 19 2014 1:23 am Hai im from Sabah, Malaysia.. I love to watch biscuit teacher and star candy so much.. This is 1st drama of gong yoo i've fallen in love.. So fun to watch and made me cried.. But anyway this is the best drama i've ever seen.. Love u gong yoo..

Clarkdale44 Dec 16 2013 4:44 am It was good drama from comedy prospective but i didn't liked the its plot much neither casting.

First thing is the compatibility of the main leads, Na Bo-Ri and Park Tae-In i don't think they have much of a chemistry together... I didn't felt that deep feelings between them together... I don't usually feel bad for the other party but this time i have to.. I really feel sorry for Ji Hyeon-Woo, Nam Jaem-Ma and Eun-Seong. Na Bo-Ri destroyed the feelings of three peoples. She wasn't sure about her feelings and took advantage of Tae-in's feelings when she needed comfort. She was going back and fourth to Park Tae-In and Ji Hyeon-Woo during the entire series. I am the guy who usually likes for the main leads to be together in such situation but for some unknown reason ending of this drama didn't felt right. Well everyone has their own opinion!! I will give it 5/10(for decent casting and story)

Sawako Jul 28 2013 9:56 pm i haven't finished this dorama yet, but I think it's pretty interesting. Though I'm a little bit confused by the matter of "does the art teacher like her"? He seems a bit jealous.. Well, I'll have to finish it to know but I guess they'll form a pretty cool love triangle. hehe (=^.^=)