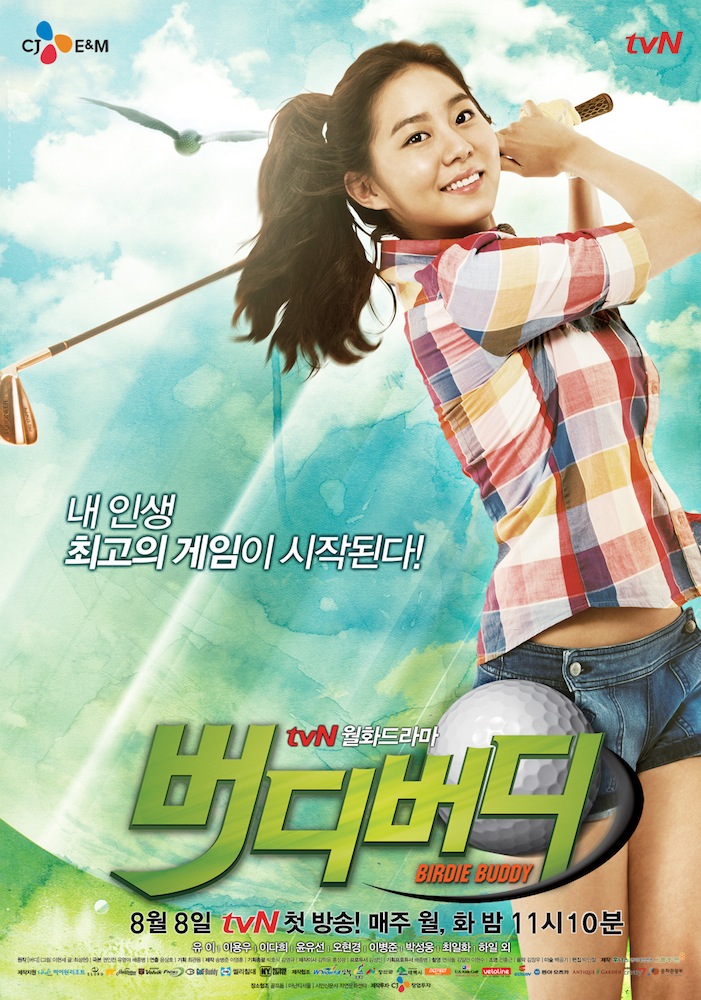 "Birdie Buddy" tells the story of former pro golfer John Lee (Lee Yong-Woo) and how he leads two to become the next golf queens.

John Lee became the first Korean to win a PGA title. His background was a mystery and he was an adoptee. John Lee also excelled in the Afro-Brazilian dance/martial arts style known as "Capoeira". Even though he found success by winning the PGA title, John Lee stopped playing golf to become a golf course tester ...

Min Hae-Ryung (Lee Da-Hee) was raised to become an elite golf player and was always surrounded in the best environment to play golf. Her emotions have always been controlled and she has a deep wound inside of her ...

Sung Mi-Soo (Uee) is a country girl from Kangwon Province. She comes from a poor background, but her mom worked as caddie. With her Mi-Su's bright personality and determined effort she attempts to become an elite golf player ...

Terry Apr 07 2021 7:29 pm I am currently on ep. 3 but i think this needs to be said, Mi Su is selfish. She knew her family couldn't afford her dream and even almost cost another family their livelihood because people were supporting her dream. Her mother and father works hard and her father even left home to make money because she refused to understand they couldn't afford her dream. Then when she starts to compete she feels as though they are putting too much hope in her and she feels stuck. She did that to her family and neighbors for years with no remorse and only saw her dream. This is the definition of selfish and so far i am not liking her. The male lead is really handsome but the hairstyle is dumb and it looks ridiculous on him. I, like Katrina, don't understand why the dreads are so thick on half a head. And it is a no for me.

Katrina Jul 19 2019 9:23 pm I watched this because of the high rating, but I have to wonder if I'm watching the same show. Most of the acting is pretty mediocre, the writing is poor, I hated the stupid dread wig (come on, over half his head is buzzed short so where's all that hair from?) and I just watched episode 11 where Mi Soo had been tied up for 4 days to straighten her back. Say what? So it's okay to leave her tied up with no food or water. She would be covered in her own filth and about to die with no water and have long term PTSD, but oh it fixed her back so no biggie. I cannot stand shows that do something so ridiculous. After that I have lost all interest in this show.

Zee Feb 23 2018 6:11 pm Great movie, I enjoy Korean movies, the scripts have interesting backstories and twists. Always interested in how cast members will play their parts. I'm usually impressed .I'd like know the name of the circular piece of workout equipment in the gym. It's a one-movement total body workout piece. can anyone tell me the name of that equipment?thank you

Waegukin Dec 28 2017 11:28 am I was going along fine with this just ok drama until the ridiculous sub plot of Mi Soo's father's head injury. Its simply stupid and not even close to believable. And why on earth would they take him to a police station yet no one took him to a doctor for days? The only thing keeping me watching is the male lead is impossibly handsome! The lead actress keeps making this stupid, blank staring face that is supposed to look like she's thinking deeply but she overdoing does it. This drama is ok enough to watch if you like golf, eye candy, ridiculous plot twists, overly drawn out storylines and family/community support for a dream, or if you don't have another to watch

Russell Menoza Feb 21 2017 6:00 am Very good movie series, quite a few twist made it more interesting. I wish for more sequel please. We just love it?️‍♀️??

Russell Menoza Feb 21 2017 5:58 am Very good movie series, quite a few twist made it more interesti

M.F. Mauduit Oct 20 2016 10:35 am This was a good script until the end which did not make any sense ! In fact it ruined it Hae is a spoiled selfish girl without any depth, Mi Soo has not only strength of character but values and qualities of the heart, he should have ended up with her, it is impossible not to fall for her. It was a stupid ending as if someone different has written the last scene!!!! Was the main writter out to lunch!!!!!

M.Shaw Jul 24 2016 12:26 pm I Would really like to see a sequel to this series crated. I think it would be a hit. I would like to see John Lee rehabilitators and back to coaching Sung and at the ending, together. How bout it :)

Sam Apr 24 2016 2:48 pm I loved this. I just discovered Korean Mellow dramas this past year. This was terrific. All the cast members were excellent. Sometimes the plot was soft but the actors were great and the cinematography were outstanding especially through the exhibition scenes. I loved it.

Mick Apr 17 2016 11:35 am Agree with many of the comments, really liked the drama but the ending was terrible, very sad

Steph Apr 10 2016 6:18 pm Loved the drama as a whole.. watched the whole thing in two days! But the ending was awful. I wouldn't have minded if MiSoo hadn't ended up John Lee if they didn't spend so much time making it seem as if they'd end up together. While he did have a previous relationship with HaeRyung, he'd look at MiSoo sometimes or do certain things for her where you'd definitely think they'd be together. This kind of ruined the show for me but it was still worth the watch.

Greg Mar 07 2016 10:08 pm I got into it,one person was right,after episode 20 there was no more golf,just drama,may be mi soo could of ended up with her friend that had the crush on her,one more thing,on Netflix it said season 1, so is there a season 2 or 3?

Walker Aug 26 2015 2:15 am LOVED the ending. Just because you're the MC it doesn't mean you get everything you want. The male lead had a stronger pre-established relationship with the other chick. I bet if Min Hae-Ryung was the MC you wouldn't complain about the ending.

fashionista Aug 17 2014 7:14 pm it could have been better if John woo ended up with misoo.. she deserves to be loved! I was in a bad mood after watching it..the ending doesn't define the kind of LOVE in the story! sooo upsetting! I even liked the story but... yay!

rskdrama Jul 28 2014 7:56 am I decided to see this drama because of the rating. But other than Uee and her mother, and may be her brother and friend, and the supporting actors; all the other main actors were lacking in acting; especially the lead actor, he wasn't leading in any way. I wish he was more of an actor. Am so unhappy about Hae Ryung character as well. The actress did a decent job, but seems like they wanted to extend the story beyond 20 ep and decided to make her a jealous girl again.. am so not agreeable with this decision.. unnecessary for a golf story. There was no golf happening after ep 20. So my score 5/10

John Jul 21 2013 2:25 pm Thanks for all the Posts about the bad ending. This is enough reason for me to skip this one. I highly recommend Babyfaced Beauty if you havent seen it by the way. Just finished watching it. It was completely satisfying 100%.

Alix Jun 04 2013 1:56 am Soooo mad at the ending! I was in a bad mood all day!. Give this impression that that nice, thoughtful girls come last.. and I agree if she couldn't have Coach she should have had some one.. I would have voted for the very handsome guy she played the last game against!!!!

Terry Dec 09 2012 3:29 pm I agree with the others that hate the ending. Why did Mi-Soo have to end up with no love, or at least a new character for her to go on with. Even the little brother got to. I loved it up to the end. Uee was great! That's why they shouldn't have done that to Mi-Soo. Also, hats off to Yun Yu-Seon. The mother was so cool.

CYEN13 Oct 29 2011 7:53 pm This drama was different from others and thats why I like it. The ending for me was satisfying but I never thought that it would end up that way. Uee did a great job on this drama so I'll give her thumbs up.

EGLC Sep 09 2011 5:26 pm This drama is actually very good and inspiring. UEE did an excellent acting in here!