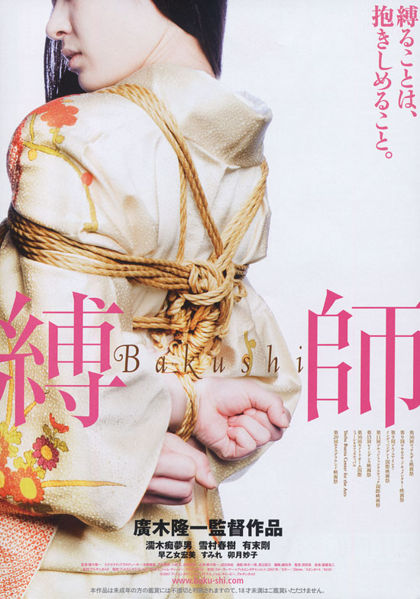 A beautifully stylised and intriguing documentary about Japanese S.M. rope binders and their models, revealing the expertise of Hiroki who has made many pink pictures. From the subtitle of the film, ‘the great lives of the rope masters’ (the bakushi), it is apparent that Hiroki does not want to maintain a neutral distance, but wants to express his admiration for the art of torturing for sexual pleasure.

The various sessions are meticulously and patiently filmed. Because they are specially performed for the film makers, this revealing documentary could equally be called a fiction film. The centuries-old game of tying up and ritual chastising exists in several countries, but the ceremonial detail and the stunning mastery with which these women are bound turns out to be just as typically Japanese as flower arranging and pouring tea. The art of kinbaku, as sadistic erotic rope tying is known in Japan, was traditionally discussed in secret magazines, but has now acquired an almost public form. The three rope masters presented can also be referred to by name: Nureki Chimuo, Yukimura Haruki and Arisue Go. And their models: Saotome Hiromi, Sumire and Uzuki Taeko.