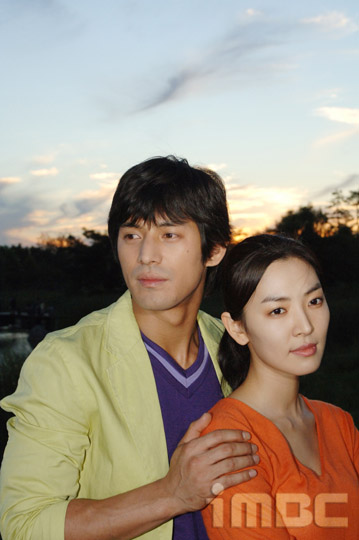 The Two Close Friends; Gyu-eun and Yeon-seo, Though their personalities and tastes are quite different, they have built a very special bond over the years. One day both women run into a man named Yoon-jae on two separate occasions. Both of them have a crush on him. Without realizing she loves the same man that her best friend loves, both of them are just happy to find someone special. When Gyu-eun introduces to Yeon-seo Yoon-jae as her boyfriend, Yeon-seo is shocked. When asked about the man that she has been talking about, Yeon-seo names Soo-hyeong, who is just a friend. Soo-hyeong is Gyu-eun and Yeon-seo’s friend. Left without any other choices, Yeon-seo gives up Yoon-jae for Gyu-eun. Even though Yeon-seo tries to avoid Yoon-jae, the four people often hang out together. Despite their families’ disapproval, Gyu-eun and Yoon-jae’s love get deeper and deeper. However, Yeon-seo can’t put Yoon-jae out of her mind. Hiding her feelings about her friend’s fiance, she helps her friend prepare for the wedding.

Yoon-jae and Gyu-eun are Married. Yeon-seo believes that she can forget the man who became her best friend’s husband. However, Gyu-eun has an accident and falls into coma. Yoon-jae doesn’t give up Gyu-eun. Yoon-jae‘s parents who initially weren’t thrilled about his marrying Gyu-eun persuade him to leave Gyu-eun. However, believing that she’ll wake up soon, Yoon-jae legalizes their marriage. Yeon-seo is touched by his love. Since he can’t be by his wife’s bedside all the time, he sometimes asks Yeon-seo to take care of Gyu-eun whenever he goes out of town on business or works late. There isn’t any agreement between the two, but they take turns taking care of Gyu-eun now. Yeon-seo realizes that she still has special feelings for Yoon-jae. She tries to avoid him. Without knowing about Yeon-seo’s feelings, Yoon-jae believes that she blames him for her best friend’s accident. Since Yeon-seo isn’ t sure if she can resist any longer, she volunteers to be transferred abroad and leaves the country.

Hence my comment will remain the same yet i wanna add few more things...

Spoilers are ahead so please be extra careful.....

First of all we know that all our characters are victims of circumstances... If it wasn't for that accident then nothing would've happened between YJ and YS or maybe it would have.... I don't know exactly...

YS liked YJ from before KE had the chance to get to know YJ.

To be honest i really don't like the character of KE... She practically forced YJ to date her.. YJ was busy with his work and she just shows up during work hour and made him go out with her.... He was not much interested in dating yet she made him..

KE and YS were like total sisters, KE knew YS liked YJ yet she married him anyway....

About our male lead YJ... He is the sweetest guy i know.... What he did for KE i don't know any one would've done the same... He waited for 3+ years for KE to wake up.... the care and recovery he put up was extraordinary.

KE off course didn't see how much YJ was lonely and struggling during these times because she was asleep.

Even after waking up from coma and finding out that her best friend and husband are having an affair she was angry i know but she could've shown a little bit sympathy for them as well... She needed to understand the situation they were in was not easy considering YS liked YJ first before KE had the chance...

What i hate about this drama the most is the most depressing ending in drama history... This is the reason why i wrote my last comment in the way i wrote...

Nothing happens.... Our sweet main lead YJ is left alone... KE divorces him and goes to England and YS leaves him.... YS admits to KE that it was a mistake.... She even has a miscarriage.... what was the point of her being pregnant than if writers wanted to do that....

There is not a single positive factor in this drama to latch upon so you're left with nothing but frustration....

What was the point of spending 16 hours...

The only good thing about this drama is the acting.... JRW and OJH did a fantastic job in expressing intense emotions... Impressive work there..... No matter the story these two really made the characters come to life....

I agree with Dianne.... But i am the type who likes some positivity at the end and this drama had none.

So if you're like me then you will know what to expect.... I will not recommend this to anyone unless you have a strong will to go on...

Dianne Aug 21 2014 10:17 pm I had wanted to watch this drama; but, after reading so many negative comments at several sites, I wondered if it was worth it! Surprise! I loved it! Because I knew the subject matter (what happens to the emotions of the spouse of a wife who is in a long comatose state). The writers did such an excellent job of portraying in the script the various stages of grief the spouse goes through plus the temptation of falling in love with someone else during this caregiver time. With grief, blame, guilt, severe sadness and depression and especially loneliness there is the temptation of seeking love and comfort from another... This brings in the "forbidden love" affect, which to me was explainable. Besides the writer's script, the lead actors were amazing in revealing the intensity of the 3+ years and the movement from one stage of grief to another. This isn't a lovey-dovey drama. It's more for young or older adults. I rated it 5 Stars and would recommend it highly ;)

Clarkdale44 Dec 12 2013 8:24 am This drama was nothing but a wastage of my precious time.. Female casting was alright but Male lead was not up to the character of the story. There was incompatibility between couples. You can say its not about true love, or they wanted to be unhappy in life... I don't understand the purpose of this drama.

I won't recommend watching this drama to anyone unless you have free time to waste. I will give it 3/10 (Bad casting, cinematography, story, and ending, a complete waste of time)