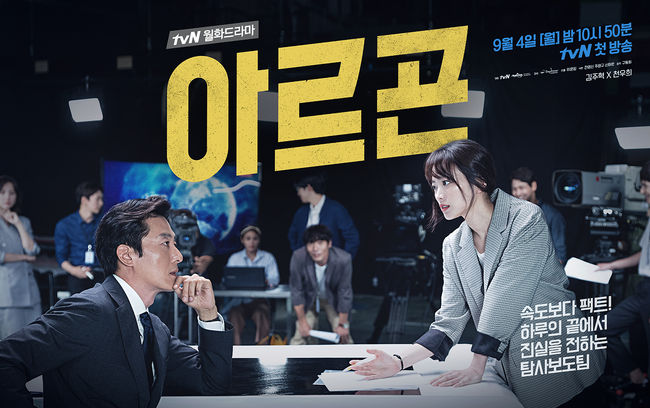 Kim Baek-Jin (Kim Ju-Hyeok) is an anchor, reporter and leader of investigative reporting team "Argon." He does not tolerate mistakes and relies only on facts.

Meanwhile, Lee Yeon-Hwa (Chun Woo-Hee) is a contract reporter. 6 months before her contract is to end, she is assigned to work at “Argon.” She struggles to get a permanent job there as a reporter. Working with Kim Baek-Jin, she receives strict training and grows as a reporter.

Diane Apr 09 2018 4:23 pm This is an intelligent, well-written drama; a very nice change, given the current trend in the opposite direction.

Mirtika Dec 19 2017 4:20 pm An excellent drama. The cast works together really well. Some of the stories had me weeping. It's wonderful to see this group of reporters with the politics inhouse and the corruption and injustices of society--they work to expose the bad. And they are human, so they have prejudices, virtues, make mistakes, act heroically. I was sorry to see it end. So good. The lead actor was so excellent.

Karlie Nov 22 2017 8:25 am Kim Yoo Hyuk. Gutaeng hyung. I miss him so much! Argon is a good movie. He always appears wonderful and warm as the character Kim Baek Jin! RIP! I’ll never forget him! <3

Jin ah Nov 10 2017 7:00 pm I came here after kim joo hyuk passed away, but this drama beyond my expectation. The plot is good, kim joo hyuk is sexy as well as reporter. Similiar to pinocchio.

Kori_23 Nov 02 2017 11:08 pm My heart is broken over the death of Kim JooHyuk. I became a huge fan while watching 2D1N. He opened up his heart to fan's of 2D1N & he gave us smiles & laughter. He is a member I will always remember forever. Rest in Peace Kim JooHyuk. My deepest condolences to his Family & Friends.

Alli Oct 04 2017 2:05 pm If you liked Newsroom (Showtime series), then you'll love Argon. Great acting and characters you're curious to get to know. I wish it was longer than 8 episodes and I'm surprised that the user rating is so low (perhaps because there aren't any "idol star" actors?). This is definitely worth watching!

Woohee unnie Sep 06 2017 1:58 pm I'm going to watch this for Chun Woo-hee unnie! She has turned down so much drama offers but finally accept this one so it must be great!

Yuan Jul 09 2017 4:08 pm I'm sure she have learned the lesson! She'll be too foolish to repeat that! Just please drop the issue already, i agree with @Rose she has directed other successful dramas that captured our heart. It is not solely her doing on CITT, TVN has something to do with it too.

Rose Jun 30 2017 4:12 pm @Trapped in the piano and piano in the trap, don't forget that she was all the director of the famous COFFEE PRINCE!!! I've been searching for years for a drama like that one but I've seen none to date.

TRapped once in the piano Jun 30 2017 2:25 am Thanks @Piano in The trap for letting us know this k-drama is the same awful drama of CITT. I think i will pass this too.... That director is in my blacklist too...

Piano In The Trap Jun 24 2017 2:48 am I like Chun Woo-Hee but the director is CITT drama director.. Always remember what she did in that drama.. And who knows piano and 2nd lead affair will be appear Again? So i quit this drama cause the director still in my blacklist..

Grace Jun 05 2017 5:36 am So, after rejecting to play lead female in some drama , finally Chun Woo Hee choose to play in this drama???? good luck then :) The director was directing famous drama before, hope the drama will good :)