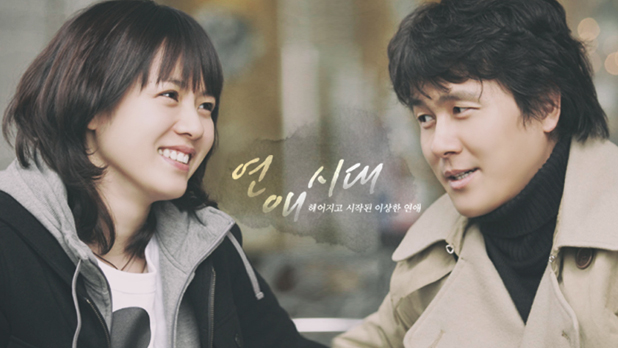 Lee Dong-Jin (Kam Woo-Sung) and Yoo Eun-Ho (Son Ye-Jin) got divorced 2 years ago, but somehow they keep meeting each other for some odd reason. Even after they’ve gotten a divorce, they keep meeting up at the donut shop where they used to date to keep check on each other’s love life. They sustain their relationship through making various excuses to meet such as marriage and divorce anniversary. However, unlike other young couples who get easily married and divorced, these two really love each other. Nonetheless, others can’t seem to leave them alone in their appeal as singles. Even though they love each other, in their pride, they end up introducing someone else to each other…

Jinjoo Oct 23 2019 9:07 pm I'm almost finished watching but can't help but put my 2 cents in here so to speak....i think we don't have to be married to u/stand what's gg on with the 2 leads, however, my u/standing is that they separated or divorced actually because of the demise of their child shortly after she gave birth to him! First of, everybody's opinions may differ but personally, i'd think that this couple should stay together even after the child's death bec that's the time they need each other? right or wrong? again that's just my own opinion, it's so sad that both of their pride just kinda suppressed their feelings for each other but i think both are still very much in love! this is an old drama but they say oldies are goodies! I love both KWS and SYJ but i guess they didn't even kiss in this drama! I noticed SYJ also didn't get to kiss SSH in Summer Scent, is this one of her requests perhaps to the production? No kissing?

Dorama May 12 2018 2:40 pm To me, one of the best korean drama's ever made. A well-thought out script, great cinematography, great soundtrack, and multi-dimensional characters. I've seen many kdrama's since, and nothing has come close to it's quality. Would highly recommended this totally underrated drama.

sgt_doom Apr 19 2018 6:13 pm My all time fave! Ms. Park does a fantastic writing job on the script/story, while the director did an awesome job as well, with PERFECT casting! The scene in the store cafe where Eun-ho is yelling at Dong-Jin to have a meal was priceless, along with pretty much every other scene as well.

Wayer Mar 14 2018 6:23 am Still my fave k-melo until now. Realistic about love and relationship. Came here since rite now watching GWS in new series, Muhan character reminds me of Dongjin.

Kris Feb 25 2018 5:29 pm This was my first or second Korean drama I ever watched. Kong Hyung Jin is such a great actor. Would like to see him more. Loved his character in I Love You as well. I felt bad about the ending. The sister should have had happiness too. I loved the doc/sister couple so much. I really hoped the ceremony would not happen but it did. In Korea the marriage doesn’t begin until the marriage is registered. And she got happiness in the end. Didn’t want anything bad for her character. So sad they rather split that see the other sad. Sad is a healthy thing. I wish she got to hold the baby. I hope that was writers notion and not how still births are handled in the country. This series awesome! No crazy mother in laws or corrupt rich people!

cheers Oct 14 2014 10:30 am just finished this drama & luvd it! the leads are awesome in their roles! i'm a huge fan of happy endings & this also made me cry, v touching when they decided they cldnt live w/out each other! kudos to her sister, father & the doc who hv all been gearing for their happiness no matter how it takes! i was also saddened when he remarried gu kyung coz i was hoping they will just get back together & i think DJ was shocked to learn that Eun ho never married the profession even before he married gu kyung! the train scene was v touching & it may me teary! they're meant for each other that's the main thing! i feel sad for gu kyung but she shld be commended for being unselfish & let him go! i highly recommend this drama! luvd it! Kam woo sung & Son ye jin are two great actors of all time! luv them! am i right no kissing scenes? :)

hibiscus Oct 14 2014 10:10 am i just finished watching this today & it's a very touching drama, i never thought i'd cry in some scenes -- it's hard not to think why did these two who are v much in love had to part ways because of the death of their baby? you'd think that's the time they should be together - after all they can still have another one! i also was sad when DJ decided to re-marry his first love in spite of seeing how eun ho & himself seem to have feelings left for each other, i guess both are demonstrating that they could still find another love but in the end they still love each other! i admire the support of her sister, father, and the doctor who's DJ's best friend! the start of the drama was a bit slow & dragging but it got really better in the middle of it! I'm just so glad they got back together & have a child again! 2 thumbs up for this drama, highly recommended! both leads were super great actors as well as the second leads! good direction & all!

Eskimo Apr 14 2014 11:04 am I've just finished the last episode and it was a truly unique drama experience. There are many subtle details, a little abstract. It isn't very dramatic for a drama, but all the dialogues are so interesting. The interaction between characters; the chemistry, especially between the four main character, Dong Jin, Eun Ho, Jun Pyo and Ji Ho was brilliant. It's a feel good drama, most of the time, with many light moments. Dong Jin and Eun Ho's constant denial in their love for each other is indeed frustrating to watching, especially when their relationship deteriorated towards the end. Ever since the start of the drama, I've rooted for the two to reconcile. When Dong Jin got married Yu Kyung, I was a little disappointed. Yu Kyung was a really nice lady and was really unfortunate their marriage turned out like this. Dong Jin shouldn't have made such a rush decision while he was still so hesitant, and ended up hurting an innocent lady. Overall, I enjoyed this drama very much, and appreciate the realism it brings about in a relationship. It's really deep too, touching many insights on relationships and love. I thought they could have wrapped the drama a little better, but the ending only left me craving for more Dong Jin - Eun Ho, and Jun Pyo - Ji Ho moments.

Clarkdale44 Feb 04 2014 1:32 pm Well, i think it was an OK drama... To be honest i started feeling frustrated after 6th episode and i was just going crazy. It was a weird relationship from the beginning. They meet each other after their separation like nothing happened!. All the casts were great in their roles. It was depressing and yet at the same time satisfying. I will recommend it if you like normal human drama category.

WARNING: Don't read further if you have yet to watch this drama:- Although it was human drama with concepts of real life like situations, still they are making marriage and divorce like a child's play. I hate the fact when Ji-ho tries to keep Dong Jin and Eun-ho together even after Dong Jin got remarried to Yu-kyung and lies about Eun-ho's suicidal note. I think it was very selfish of her. Why Dong Jin and Eun-ho got separated in the first place? It was a mystery for a while until the very last of the drama. It was all due to little misunderstanding as always. And as usual it was the fault of Eun-ho's part. It was very frustrating to watch when i see both Dong Jin and Eun-ho has feelings for each other still due to their stupid pride kept teasing one another. And finally Dong Jin got remarried to Yu-kyung. To be honest i am not satisfied with the ending. I found Dong Jin and Yu-kyung more compatible then Dong Jin and Eun-ho. I wish they could be together. I also feel bad for Mi-yeon. Still i feel more bad for Yu-kyung, she got married for the first time and yet she had to face such situation.

Well i think it was an ok experience for me to watch such drama. In the end everyone has their own taste so there is a possibility that you may like this drama.

I will give it 5/10(Great casting, good direction, decent story)

this is a good drama but really underrated

lalala Apr 09 2013 10:47 am for you who like those mainstream K-Drama, i suggested you for not watch this kdrama. in this drama, there aren't chaebol-poor couple, makjang, flood-of-tears hardcore melodrama, or anything like other kdrama have.

this is just a simple human drama. but there are many value that you can get from this drama

Gasenadi May 08 2012 3:25 pm For mature people who appreciate realism, exquisite acting, comedy, intelligent repartee. No screeching chaebols, evil gangsters or familiar tropes. Be aware the superb actors and the screenplay take their TIME, employ silent acting to convey emotions and turning points, so that I was invested in the characters at the culminating point of the drama. ALL the actors were excellent (just read their work on this site) and the ending was very satisfying for the happy ending types. Tho I could have easily expected a different ending from this original series. Congratulations on a work of art.

druegnor Jan 21 2011 8:20 am Great story-line..although i must say it feel a bit slow (the progress of the story line)..but real-life suppose to be like that..you will never stop watching it till the end as you want to know how the story ends..Great acting for both Kam woo seong and son ye jin