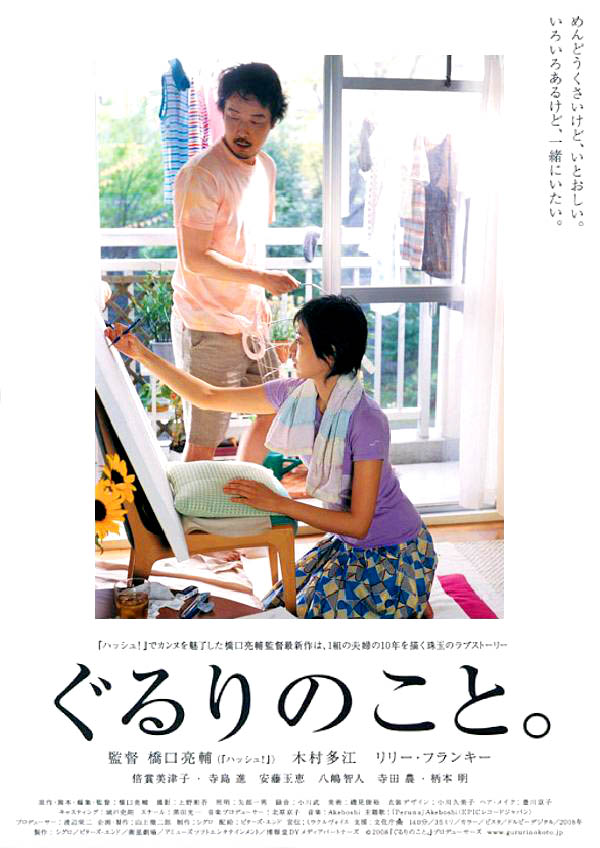 Kanao, a courtroom portrait artist, observes crimes, scandals and the decline of Japanese values without passing judgement. As he and his wife endure the tragedy of their first child’s death, hope slowly unfolds and their love story flickers to life once again. 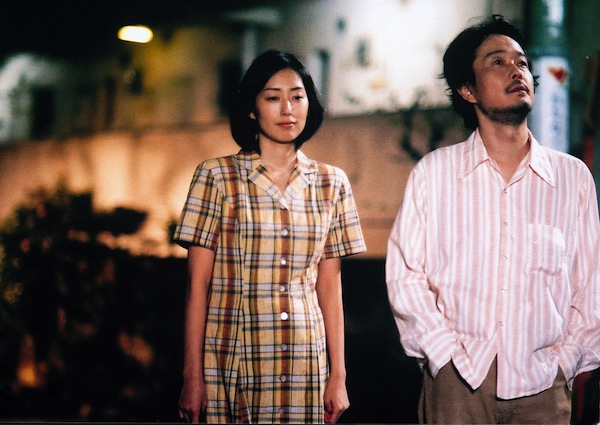 Ki Mar 08 2009 4:07 pm Ryosuke Hashiguchi is a film director who received frequent praise in the film festival world for his first four films which all dealt with homosexuality. The latest of which, “Hush!”, was released in 2001. Now, some seven years later, Hashiguchi releases his fifth film dealing with broader topics like marriage life, depression, & the fragile Japanese psyche post economic bubble boom. The film also contains charming humor, which works well to give balance to the film’s heavier moments.

1993 - Kanao Sato (Lily Franky) & Shoko Sato (Tae Kimura) are a 30 year old married couple. Kanao works as a shoe repairman and passes time by flirting with the many female customers that comes into his shop. Shoko is a few months pregnant, works for small publishing company and co-ordinates their marriage like a baseball manager. She circles on their calendar the days they will have sex and expects Kanao to follow her rules. Although Shoko’s family views Kanao as a deadbeat, Shoko finds solace in Kanao’s easy going mannerisms. Kanao then is offered a job as a courtroom sketch artist.

February 1994 - Shoko loses her baby & becomes engulfed in depression. Meanwhile, Kanano becomes fully accustomed with his new job as a courtroom artist. He deftly observes all the miniature idiosyncrasies of the various defendants that comes through the courtroom. He also notices the alarming rise of extremely violent crimes.

July 1995 - Kano & Sato’s calendar now has no circles marked. Shoko has an abortion to avoid going through what happened the year before. The easygoing mannerisms held by Kanao now works as a double edged sword. Shoko fears the lack of emotion shown by Kanao is a sign of indifference or even resentment. Shoko sinks into heavier depression & quits her job. Kanao carries his grief in his own way – by bottling it up internally. A typhoon pases over Tokyo…

July 1998 - The clouds have passed and life moves on. Shoko, with encouragement from a Buddhist monk, takes up painting once again (she studied art while in college). While drawing portraits of her surroundings, the vibrant colors of life comes out to reinvigorate Shoko’s once dark life.

“All Around Us” is prepared meticulously, expressing details that can only come from one’s own experiences. There really hasn’t been such an honest film dealing with depression since Ryuichi Hiroki’s 2006 film “It’s Only Talk.” With that said, “All Around Us” is a more ambitious film, layered with different levels of inter-twined subject matter, and having each individual scene meticulously hand crafted like fine art. The film does suffer from a handful of blemishes that keeps it from elevating to greater heights.

Casting for “All Around Us” is one of the more uneven aspects about the film. Ryosuke Hashiguchi made the shoot-from-the-hip decision to cast Lily Frankly in the central role of Kano Sato. This decision was a success. Lily Franky is best known for his auto-biographical novel, “Tokyo Tower: Okan to boku to, tokidoki oton,” which would go on to become a best-seller and inspire a Fuji TV drama series and feature length film. Like the main character in “Tokyo Tower,” Lily’s Kano Sato character is easy going, interested in the arts, and viewed by some as a deadbeat. In other words, Lily Franky virtually plays himself in “All Around Us” and is able to do so with aplomb. An aspect not found in the autobiographical novel, but displayed perfectly by Lily in “All Around Us” is to subtly convey heavy grief that is bottled up internally.

Meanwhile, Tae Kimura, an acting veteran known more for her supporting roles, is given the extremely difficult role of Shoko Sato. Kimura from her past in such films as “Train Man” and “Hana & Alice” has the shown the ability to exude sweetness in a effortless manner, but, with the heavier dramatic requirements in “All Around Us,” fails to hit the high notes when required. Perhaps in a unfair comparison, but unlike Shinobu Terajima in “It’s Only Talk” or Yuki Uchida in “Welcome to the Quiet Room” - both of whom made those films what they were because of their performances, “All Around Us” feels like a good movie in spite of Kimura’s performance. In the film’s most climatic moment (the scene in the apartment during the typhoon after Kano killed a house spider), I couldn’t help to notice Kimura’s rough acting performance rather than just being able to soak up the moment for what it was (it was scripted extremely well). Also, in another blip that may not weight so heavily with others, the constant parade of familiar character actors (Ken Mitsushi, Yoji Tanaka, Jiro Sato, Akira Emoto, Susumu Terajima, Hirofumi Arai, Ryo Kase) became more of a distraction as the film progressed. A lesser straight-up comedy would have benefited from all these cameo appearances, but the material in “All Around Us” was more than strong enough to stand on its own.

Beyond casting, “All Around Us” features well done cinematography and a soundtrack that comes on at just the right moments. The parallel between post-economic bubble Japan and the marriage of Kanao & Shoko was fascinating. The baby that Shoko lost affected Shoko & Kano in the same manner as the collapse of Japan’s economy affected the psyche of Japan. Kano was in the center of all this as he had to witness first-hand the effects of depression on his wife and the effects of depression on Japan at large (this was seen via the courtroom trials). Through all this, Kano suffered internally from his own despair and made it through by having his wife at his side. The lengthy runtime of 140 minutes could have been trimmed down, particularly in the middle portions.

There’s lots to admire in “All Around Us.” Director Ryosuke Hashiguchi has made his best film to date and displays an immense amount of talent. Lily Franky also shows that, when at least playing characters similar to himself, he can perform with the best of them. The screenplay is also incredibly strong and brings to light the cycle of emotions that affects individuals & groups in different ways. Weak points with the movie existed with certain casting decisions and a bloated runtime. Overall, an impressive film you should check out.

Myself. Feb 26 2009 8:12 am Just finished watching this,and although it's quite long there's not one minute wasted!,really worth a watch.