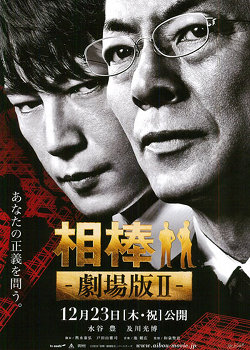 A hostage case occurs in the headquarters of the Metropolitan Police Department. Head of the Metropolitan Police Department Tamaru (Toru Shinagawa), second in charge Muneo Hasegawa (Jun Kunimura) and 12 other high ranking officers are all held hostage in the conference room. A police squad and SIT (special investigation team) surround the conference room. The motive of a hostage taker is not clear.

The first person aware of the hostage situation is Takeru Kanbe (Mitsuhiro Oikawa) who accidentally bumped into the hostage taker. Takeru then contacts partner Ukyo Sugishita (Takeru Kanbe). Ukyo thinks the most important thing is to know what's occuring inside conference room. With the help of Mamoru Yonezawa (Seiji Rokkaku) of the crime laboratory investigation section and Kohei Jinkawa (Ryuuji Harada ) from ex-special command team, Ukyo works out a secret plan.

Around that time, 2 gun shots are heard from inside the conference room. Despite Ukyo's strong objections, Teruo Nakazono orders a police squad and SIT to storm the conference room. Once inside, they find Yaegashi dead by a gun shot. All the hostages have traces of ammunition, so the identity of the person who shot Yaegashi is not clear. The hostages are released and they also become suspects. Inspector Haruki Okochi (Satoshi Jinbo) asks the former hostages about the situation. The 12 officers all tell that while a physical struggle ensued, the gun was shot and they do not know who shot the gun.

Ukyo and Takeru feel strange about the case. They received orders from Head of Department Rokuro Kakuta (Atsushi Yamanishi) to investigate the 12 officers. Meanwhile, high ranking National Police Agency member Koken Inoda (Ittoku Kishibe) and the minister of the National Police Agency Fumio Kaneko (Ken Utsui) start to take actions that doesn't seem right. Slowly, the truth emerges. A shocking fact of a past case involving Yaegashi and Keiko is then revealed