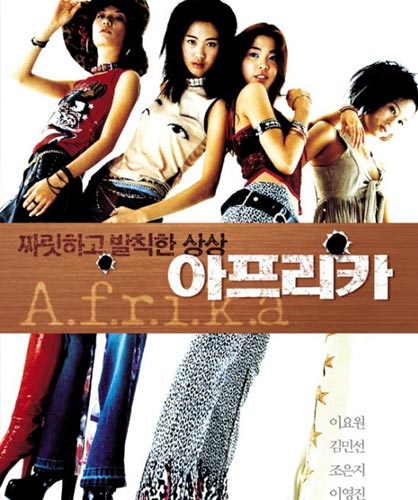 Dissatisfied with their lives Ji-Won (Lee Yo-Won) and So-Hyun (Kim Gyu-Ri) decide to take a trip away from it all. They commission a car from Su-Hyun’s deadbeat boyfriend Young-Bae, and he says it’s no trouble, he can easily borrow one.

Meanwhile a cop and a gangster are knee-deep in a poker game run amok. They’re down to the felt, and as a last resort they bet their guns, to have one final go at the pot. Naturally they lose, and another gangster walks off with both their weapons.

Back to So-Hyun’s boyfriend. It turns out that his plan is just to steal a car, and when a high rolling gangster leaves his car right in front of him, Young-bae sees an opportunity. He steals the car, and so the girls have their getaway vehicle just like they wanted. Well, almost. Because it turns out that the car belonged to the very same gangster that prevailed in the poker game, and he just happened to have stashed the guns in the back seat.

When the girls initially find the weapons, they think it’s simply toy guns, but a shattered windshield later, they realize they are in fact holding two actual guns in their hands!

The girls are forced to abandon the car (the whole shattered glass and bullet exit hole are a little too conspicuous). As they are walking by the side of the road, they’re picked up by two men who offer them a ride. But it turns out they are really out to rape them. In sheer panic Ji-Won grabs one of the guns and shoots randomly around, scaring off the two men.

Back to the gangster and the cop. By now they’ve realized that their guns have made their way into the hands of whomever stole car. They set out to hunt down these devilish fiends, before anybody realize the guns are missing. The cop is growing increasingly frustrated, since his entire 20 year career is on the line if he doesn’t find those guns.