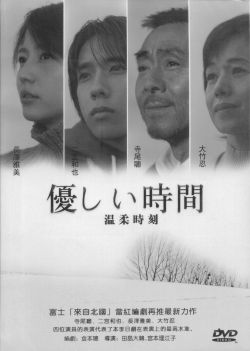 This story takes place in a little coffee shop in a pristine village that seems to have been forgotten by time. The theme is the warmhearted bonds between persons, which is a focal point of dramas by the famous screenwriter Sou Kuramoto. In this drama, a story of reviving the bond between father and son unfolds before a background of varied human events. Another theme is "tenderness" as the drama poses the question: "What is genuine human tenderness?" This is a question for viewers to ponder as they witness the thawing of relations between the two main characters. The main character, Yukichi, used to be a topflight businessman at a trading company abroad. With the unexpected death of his wife Megumi in an car accident, he quits his elite job although shortly before retirement and starts up "The Forest Clock," a little coffee shop, in the Hokkaido town of Furano, his wife's birthplace. Responsible for his wife's death is his son Takuro. Since the accident Yukichi has not seen Takuro. As it turns out, Takuro is studying pottery not far from where his father is living, but Yukichi is unaware of this. …Fuji TV