A Warmed Up Love 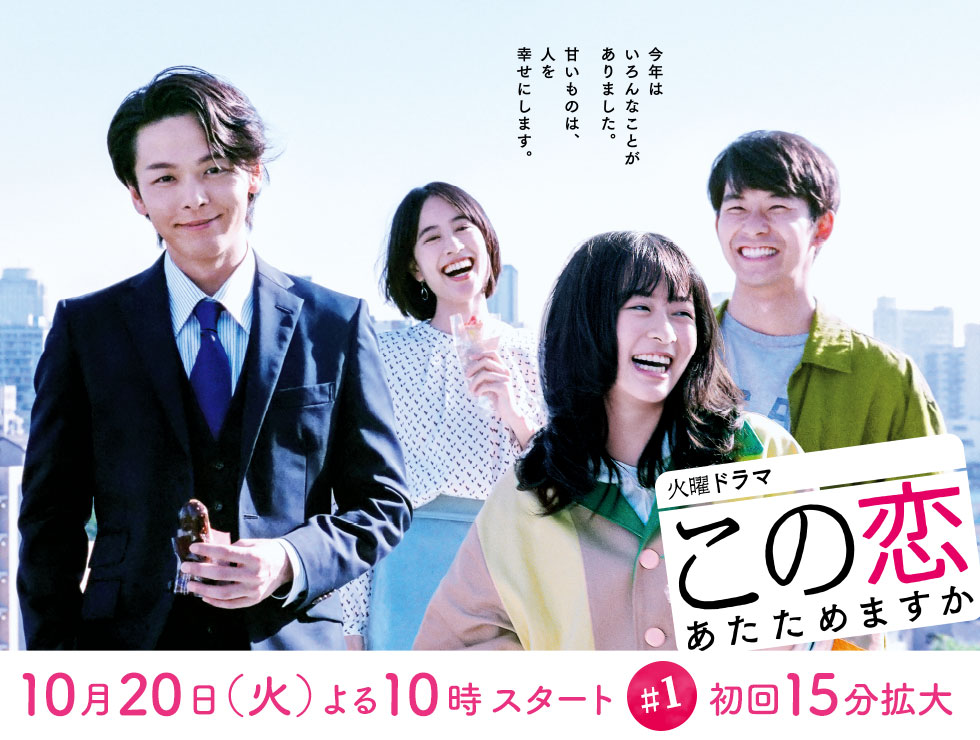 Meanwhile, Takumi Asaba became the CEO to turnaround his company that's ranked lowest among convenience store chains. While talking about developing new sweets, they become attracted to each other.

Alice May 12 2021 1:33 am The "honest" review below me, I fully disagree with, it was a lovely sweet drama, and if it's not your cup of tea, fine, but the romance was lovely, the development was very good, you see each moment of them falling for each other, their bond starts growing from the first episode and they both uplift each other and bring out the best in each other, and everyone else around them could see this too, their interactions were cute, funny and endearing and I couldn't wait for them to get together, there was lovely chemistry between them, and the male lead's acting was actually very good, he's monotone voice is the way his character is meant to be, and he most certainly does not have one facial expression considering that one of my favourite things in it was the cute expressions that he gave to the female lead, you could see him falling in love through those expressions. It was one of the sweetest dramas I've seen in a while. Also the reason you are not kept guessing on who she ends up with is because you're not meant to lol it's a love story between the two mains so why would they make it unknown who she was going to end up with? they put in second leads for drama purposes and for conflict, not to make people think they would actually end up with them lol. Also not everything has to have a "message" i don't want some stupid message, I want entertainment, and many people myself included do get happiness from sweets. Obviously disliking this drama is fine but I just disagree with everything mentioned.

Poor writing, no life lessons, forced romance, clichès. Honest review. May 01 2021 1:44 pm The plot was one clichè after another. It felt as if the writer threw everything at the wall and decided to see what sticks. Same old past traumas, a cold CEO who is actually kind and a poor girl who has to heal his wounds. There were moments where she slips and falls into his arms. On top of that, tons of screen time was devoted to the process of making sweets, which tended to be rather extremely dull. I admit that in the beginning it was interesting to see how she goes from being very unsuccessful and unpopular to very successful and admired, but it lasted only 2-3 episodes, and let's be honest, these episodes felt like a bait. The "message" this drama sends (at least it seemed to be the message) that sweets make you happy was completely nonsensical, it made no sense, because, come on, anything can make you happy, be it your dog barking when you get back home, an episode of your favourite tv show or a diamond necklace (each to their own). The male lead had one and the same facial expression throughout the show, his speech was monotonous. Also, it felt like watching a korean (!) drama. When he took her to a luxury store in the second (!) episode I forced a short, nervous laugh. I immediately clicked the stop button and thought I'm dropping this, but somehow I managed to finished this. Ohh I wish I had dropped this then!

Romance was forced. Past traumas were romanticized again. There was little interaction between the main couple, their dialogues were bland, Asaba didn't participate in the process of making sweets and honestly, the couple was one of the most boring ones I've ever seen. The love triangle was very predictable, it made no sense. It won't make you guess who she ends up with, there was no mystery whatsoever. The second male lead felt like an unnecessary character stealing a great deal of screen time. Plus, the heroine was ridiculously, absurdly (!) oblivious of his feelings. That's why she became really really annoying after the first few episodes. Also it felt like the lead actors forced their smiles when their characters started dating in the last episode. Moreover, the main couple had smiled and looked happy with the second leads (!!!) absolutely the same way they did when they started dating.

As for the writing, it was, undoubtedly, poor. For example, they say that this character is this and that (like Asaba is a wet blanket, Ichioka is a devil etc.), but the big problem here is that they don't show it!!! They say, but don't show. They talk, but don't act. For example, again, they say that he can't eat sweets due to his childhood trauma (that's so ridiculous, please note that the show is not a comedy) but he still eats them without any flashbacks, nightmares, racing heartbeat and other symptoms. What was the point of that trauma? I'd say he's a normal guy, based on his actions and words (he behaved like a jerk only during the first episode which might be a bait for those who like jerks). I actually think his trauma was completely unnecessary, the leads could get close without it, while talking about developing sweets. Another example, Inoue calls Asaba an old man but he looks and acts her age. That's one of the reasons why the show wasn't believable for me. To repeat myself, it felt as if they threw everything at the wall and decided to see what sticks. Another reason was the clichè plot itself, of course. The show was more of a Cinderella story, a fairytale. I won't go into details, the CEO here was her fairy godmother and prince charming at the same time. Why she's so good at making sweets without the qualifications or any confectionery courses and especially without any practice/training is still a mystery to me. The middle of the show was so slow and boring!!!

So, as I said, there were no life lessons, no character development too, which makes this drama stupid and a total waste of your time.

The music was also nothing to write home about. There were tunes mostly. It's been months since I watched this and I can't remember any. Don't expect anything memorable or special.

All in all, it's one of the most stupid dramas and one of the dullest romances I've ever seen. The only advantage here is, maybe, the aesthetic aspect (their sweets looked really appetising!). I wouldn't recommend you, even if this genre (rich man/poor woman) is your cup of tea, just because this show is made so badly. Trust me, it doesn't worth your time.

Krystal Jan 06 2021 4:28 am Like the previous comment by user Mei, I Totally Agree. The ending left me wanting more, which now makes me hope that a season 2 or TV special gets filmed, with the two main leads. I Need More!

Tomoya and Nana have so amazing chemistry despite the 15 year age difference, which seems to make them more appealing too because Shacho (President Asaba) is older and more experienced while Kiki is 21 yrs old (Nana is 19 during the time they filmed this) so she's inexperienced in love and in dating.

Mei Dec 30 2020 12:36 am This drama is sooo good! And it aired around the holiday time so if you watch it during that time, it really gets you in the spirit! I like how the characters and story are really well written, and there isn't really any character you can particularly hate since seem to make more mature decisions in the end, unlike a lot of other dramas. I really hope theres a season 2 or a tv special because I see a lot of potential since the ending didn't seem satisfying enough!!

ennui Nov 18 2020 9:58 am the main character looks like she could be chinen yuri's sister, they look so alike

Krystal Nov 10 2020 9:28 pm This one is my current favorite, I like the storyline and the main character's personality, and female lead and the male lead (Tomoya Nakamura) have good chemistry! It's a pleasant drama to watch. I find myself looking forward to watching it each week.

The female lead is young, naive, and surprisingly you just want to cheer her on as she tries to achieve her new dreams, as for the male lead, he's older and more experienced, and hardly smiles. Tomoya's character here kind of reminds me of Yuki Furukawa's Naoki Irie (Itazura na Kiss).

It's a good balance, and thankfully Kiki isn't as dumb as Kotoko but she's hardworking and has an aura about her that makes you fall for her, just like Kotoko.

Tomoya has been currently been rising up on the male actor scale and he's just so interesting to watch.

Nana Mori, the female lead, is quite young, but her age doesn't bother me, in fact I like their age difference, you can see it clearly in their chemistry. To be honest I have fallen for Nana-san, this is my first time seeing her as a female lead. She's relatively new in the acting drama department.

I recommend everyone trying this out!!!

Okkin Nov 02 2020 6:03 am All japanese dorama must be this drama don't just like give a s hit like much fan service but have a good story and good characterization