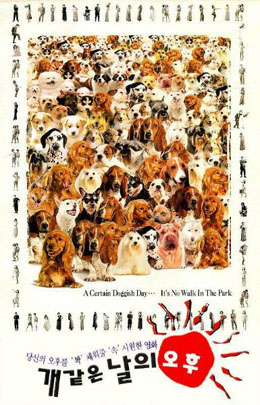 The heatwave of the century has Seoul in its grip, the people are irritable and liable to violence. In one typical residential block all the fans and air-conditioning are working overtime, all the refrigerator doors are open. Then it happens: the electricity fails and the appartments turn into incubators. The residents rush outside, seizing every water-melon in sight. In the course of the day, things hot up even more as Ching-Hee runs out on to the street in an attempt to escape her belt-swinging spouse Song-Ku, and the women beg their husbands to do something. No way, a gentleman minds his own business. Not so the women, who set off after the attacker. Now the men wake up and try to stop their wives, upon which the street turns into a battlefield, before the ambulance and police arrive. Song-Ku dies on the way to hospital, the men claim to have nothing to do with it, and the women take fright when the police call for reinforcements. They escape to their appartments, ten of them onto the roof, and barricade themselves in. A four-day siege begins, with the police commander determined not to give up. It very soon becomes clear that the men cannot face everyday life without their wives. There is spaghetti for breakfast, socks get lost and business collapses. Not that even this moves them to support their wives. On the contrary, one husband provides lunch for the policemen. Tacit support comes from other women, total strangers, spurred on by nationwide news reports. While the cops try every trick in the book to defeat the rebels, the women on the roof strike up a relationship, despite their completely different lifestyles – one is a nightclub dancer, another a housewife, a third a shy transvestite. But, as they all know, life according to one's own rules cannot last for long...