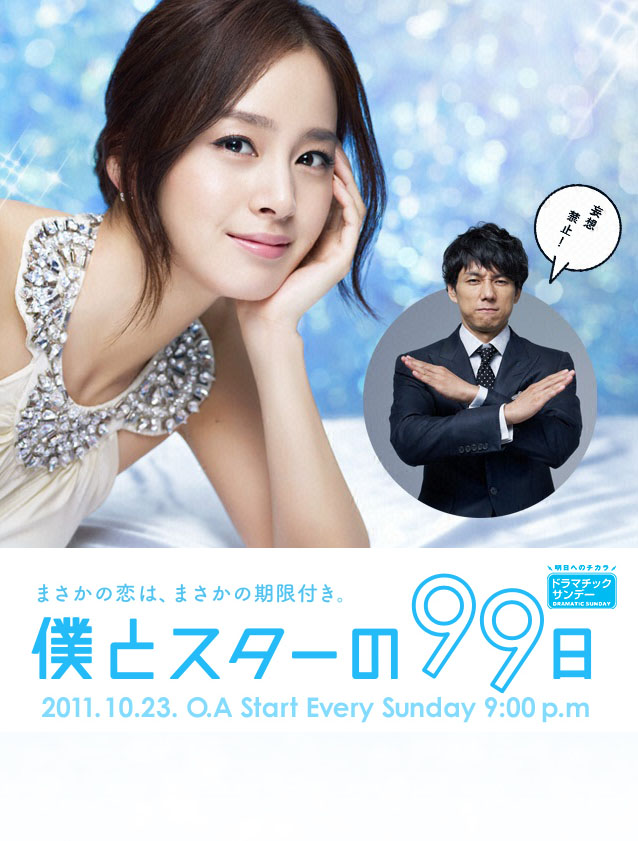 Kohei Namiki (Hidetoshi Nishijima) is a single man approaching his 40's. He works at security company as a part-time job. He also has a sweet and handsome appearance, which some people take advantage of. Kohei is easily swayed by those around him. Kohei often takes care of his sister's three kids because Kohei's sister has a habit of wandering around, but he is a passionate man and dreams of finding his star. Because of his family and economic situations, Kohei can't follow through on those dreams.

One day, Kohei is assigned security detail for the beautiful actress Han Yoo-Na (Kim Tae-Hee). Even though she has a near perfect appearance and style, she prefers to act like other normal people. She enjoys eating simple Japanese foods and on the filming set Yoo-Na will stop to help others. Yoo-Na has a pure and kind spirit. She seems to be the envy of all, but inside Yoo-Na is lonely working in the entertainment field and she also has a big secret.

At first, bodyguard Kohei and top star Yoo-Na don't get along. With time they become closer. Over the next 99 days their relationship changes. On the 100th day when the contract ends what choice will they make?

thornnnn Jun 07 2020 2:38 pm Normally only watch Kdrama but. ran across this on youtube and saw Kim Tae-hee .. now i think i wanna watch it.

CKW Sep 10 2017 7:33 am This show was surprisingly great. KTH and Nishijima pairing is unorthodox but works so well. I was never a fan of KTH before this, but I really liked her in this show, her acting felt more natural than her Kdramas and her Japanese was surprisingly great. She also looked beautiful here. Nishijima is a charming man who gets better looking with age and becomes more attractive the more you see him, his role was also charming. Loved the premise as well, the idea of a star studded actress falling in love with a struggling common man without any uniqueness is one hell of an attractive premise.

Jessica Mar 28 2016 3:51 am Loved this jdrama when it first came out, and I still love it til this day. Sweet and some scenes will send you head over heels in love with nishijima hidetoshi <3

mariann Sep 07 2015 10:54 pm waaah~ This drama is so cute! It's so funny and I loved the flow of the story....I never thought this will be good....I only watch it because Furukawa Yuki was here! I was interested as to what kind of project he had before Itazura Na Kiss (Drama)....This drama is added to my favorite JDrama List!

ace Jan 06 2015 11:07 pm I agree with the previous poster regarding the ending. As well as what would lie ahead for this couple. But I liked the series enough that it didn't bother me too much. I'm used to dramas having worse endings. What I actually liked most about the show was not the two, admittedly attractive, leads. It was instead Kuranosuke Sasaki's character, Yamato Takanabe, and his assistant. The Takanabe character cracked me up. I found myself wishing he was in more scenes. And the looks that his long-suffering assistant made me behind his back was almost as funny. Come to think of it, I was wondering more if the two assistants would finally hook up that I was about the leads. Lord knows they deserved it!

All-in-all it was ok. If you are in the mood for a fairly breezy drama with nice eye candy, you could do worse than this show.

Clarkdale44 Jan 18 2014 12:50 pm It was decent enough. Good casting.. Hidetoshi Nishijima and Kim Tae-Hee both seemed compatible with each other. Their chemistry was little bit odd but i liked them as a couple.

WARNING:- Don't read further if you have yet to watch this drama.

Although the theme of this drama was quite similar to the ones i have already watched like The Accidental Couple(K) and Star no Koi(J), i don't think this kind of ending will give much satisfaction. Yeah they are together in the end but still she is Korean and he is Japanese. Even after 19 months they still haven't thought of marriage, ending seemed like they are in a long distance relationship, she will have a change of heart sooner or later.

Hani Oct 21 2013 12:12 am OMG!!!!! I just realize that Yuki Furukawa in is this drama!!!! Now, he is the hero in Itazura Na Kiss (Mischievous Kiss) new Japanese version! I'm gonna watch back all his previous drama!

yumi Aug 23 2013 10:52 pm This drama made me fall in love with KTH lol nishijima was absolutely charming and funny, I would love to have a body guard like him haha the few episodes before the last one felt like it was dragging a bit. but the ending was adorable :)

Jenny Dec 22 2012 4:09 am I'm pretty impress with this drama! It turn out great! Truthfully, I didn't expected it to be that entertaining, I thought I would quit watching halfway if the drama wasn't that nice. But it turn out to be great! Although the main actor is kind of old, I admit. But as you continue watching, he would seems to get more and more good looking. :)

Balforbes Sep 26 2012 1:16 am I think that because japanese culture does not express feelings through words directly. It's sub-text that make it's meaningful and fascinating for me :) KTH is real beautiful than ever. This is how she should look, as a glamorous superstar. And Hidetoshi, at first I thought he looks a little bit old, but I can guarantee you will fall head over heels for him >/////<

Balforbes Sep 26 2012 1:13 am Oh my god! This drama is SO goooooooood!!!!!!!! I've been a big fan for korean dramas and never took a look at J-Drama before, but I must say this drama indeed surprises me a lot! The plot is DAMN good and so heart-wrenching, not that super-lovey-dovey like the koreans but seriously cute >//////////<

Cherry Jul 05 2012 3:38 pm Nishijima and Kim Tae Hee are good together ^^ I think they are the best couple in romantic-comedy drama Hope to see them in Japanese or Korean drama again!

diyahvaleAKTF May 02 2012 2:18 pm I'm proud to be CASSIOPEIA love u TVXQ ganbate to be 5 member again This film very good for CASSIE fans of. TVXQ thanks for the writer ^_^V

Bukusei Nov 21 2011 3:30 pm I love to watch this drama. Nishijima san to Kim tae hee san are such adorable couple.

Rachel Nov 09 2011 5:02 pm This is such cute drama. Kim Tahee and Nishijima Hidetoshi are adorable. Hoping to see them get together^^

Minh Nov 05 2011 7:50 pm This is so ridiculous but instead of loving Taecyeon (Teason..lol) I'm falling in love with Nishijima san. Haven't watch any of his work, have to start doing from now on.

Zeilou Sep 29 2011 2:03 am I just read this new drama just today. So since Taecyeon and Tae Hee is here. I might watch it even though it is Japanese base. Ooh! Can't wait.