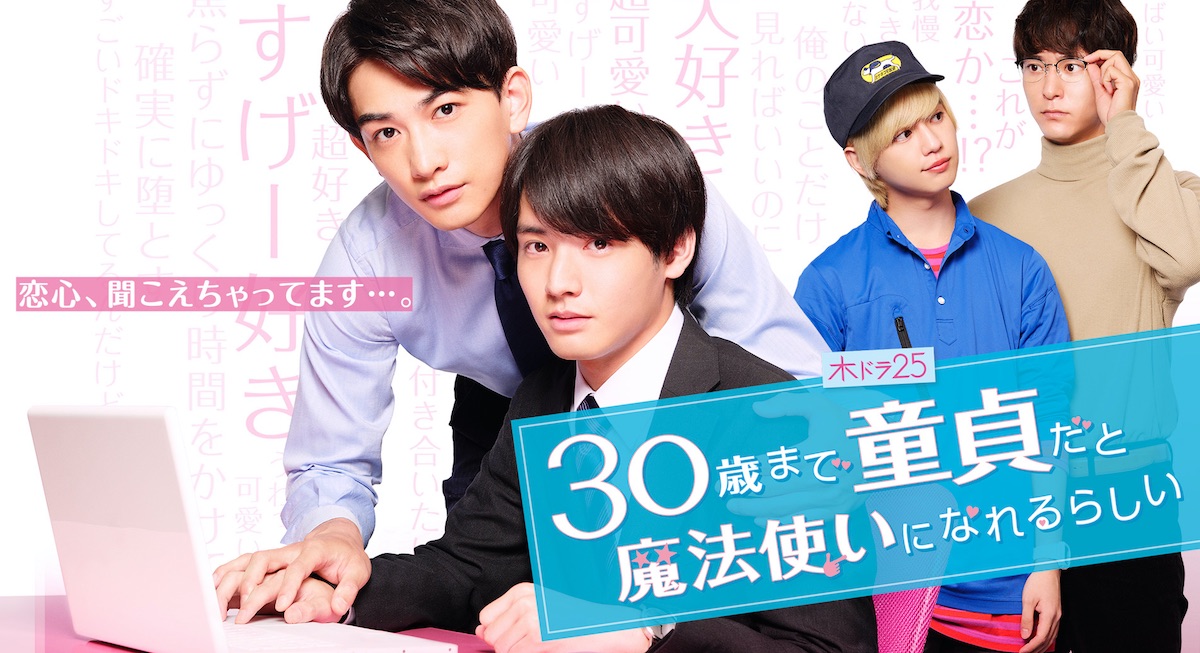 While still a virgin at the age of 30, Kiyoshi Adachi (Eiji Akaso) gains a magical power. His magical power allows him to read other people's mind by touching them. At first, he is overwhelmed by his power. His new magical ability is not helpful to him at all. Things change, when he accidentally touches Yuichi Kurosawa (Keita Machida) and reads his mind. Yuichi Kurosawa has romantic feelings for Kiyoshi Adachi.

this is too good.

Ranszky Jan 16 2021 7:56 am This is a really well-written and well-produced drama for anyone who wants a feel good romcom series. I really enjoy the universal values even if I'm not particularly looking for a BL drama. I think one of the strength of this drama. The highlight goes to Adachi's character development. He overcame his insecurities and indecisiveness with the support of Kurosawa and other characters. Not a single character is wasted, and there is no antagonist! They all grow together and live happily ever after lol. I like that there is no necessary skinship because you can feel their feelings through their actions, words and expressions. Eiji Akaso and Keita Machida's acting are on point. The score is awesome, I like the music that plays every time Kurosawa has imaginations haha. My favourite is in the last episode when the fireworks are shooting.

Anyway Fujisaki is such a girl crush!

Masaka Dec 24 2020 5:17 pm That's it? Like, that really it is? I'm not satisfied in the ending, i'm really thinking a special moment for adachi and kurosawa since it's adachi's first time. And that kiss! Why you closing that elevator door!! Haha. You make people thirsty for that kiss but in the end it's freakin' cut by the elevator door!! haha. I don't know but... Or maybe the main actors don't want to kiss for real, like it's ok if that's the case. But still it's not romantic for me when adachi and kurosawa did it, i'm gonna say that's literally a bed scene, like, they showed us that they slept on the bed haha. I'm half happy and half not really happy, and even i know season2 is impossible, i'll still hope there's one haha.. Heytchu ?

Ashley Dec 23 2020 4:36 pm I love this series. The chemistry in on point. Almost natural. (The only thing that bothers me is the second couple.) I would love to see more of Adachi and Kurosawa. I'm already hoping for a second season if there is more material that they can create or use in the future. I just love the couple. :)

Hanki Dec 21 2020 3:48 am @nagareboshi: I also hate tsuge and that dancing boy. Especially tsuge, he made everything become overact, drama and stupid. Producers should listen to audiences to remove them from original manga or give them a better personality. And one more thing, Kodai Asaka act is not well too. I always skip when his part comes.

Greenleaf Dec 12 2020 1:11 am This Series Help me Getting Through 2020, the Most Difficult Year of Our Lives Great Work Great Actors Great Story !!

nagareboshi Dec 03 2020 6:27 pm when i'm waiting for new episode out, i rewatch all episode again and again... only one thing tht i hate in this serries...tsuge and that dancing boy...i dont know why...i just want to see adachi,kurosawa and fujisaki...

Sam Nov 29 2020 9:27 am This drama really nice to watch and the main actors are so cute together i wish they’ll have more intimate moments together either they’ll kiss or not more moments will be just fine. the only problem that it’s one episode a week and i really hate waiting. I am rewatching it again because why not haha.

Dollmasterlee Nov 28 2020 1:51 pm This for me is the best BL production in history. This is nothing like your usual Thai, Chinese or Pinoy BL show. The production value is amazing, it looks like you're watching a typical mainstream drama. Acting is on point. All actors, even the extras on the background are natural you will feel like you are part of the show and not just an audience. The sountrack is on point- music is used wisely and appropriately. Some dramas use sad music to make the viewers feel sad (because the acting is mediocre). This drama doesn't use music when there are heavy emotions displayed (because the acting is enough to get the emotions across). But what I love among all these, is the story itself. This drama may have a fantasy aspect, but it is very real and relatable. This may be a boys' love series but even those who are not part of LGBTQ will learn a lesson or two. The characters' language may be Japanese but people from all over the world will be able understand their unspoken language of love.

blue Nov 21 2020 9:40 am wow ! This is really cute ! i keep on rewatching the episodes! at the end of each episode, makes me feel excited for the next episode !! Thank you for your hardwork !

Best of JDrama Oct 30 2020 9:57 pm Wow, this series is so perfect. The chemistry is so perfect and this japanese drama hand's down one of the best this year!! This main couple deserves awards/recognition for this and all the people behind it are doing their great job!! I so love each episodes of this series, I have watched it more than 5 times each episode and that is how so good it was why I repeteadly watch it over and over while waiting for new episode release!! The new episode 4, it was so refreshing and I cried and was so in love especially the scene where Kurosawa assisted Adachi for treating his wound. That scene was so perfect, the delivery of their lines are so touching and ever since the first episode this drama was so refreshingly good. The script, the acting, everything about it was perfectly crafted. Thank you so much for best acting and drama delivery of the roles!! I will be here watching and supporting till the end of the drama, hoping for season 2 and more projects for the actors in the future!!

lovino vargas Oct 26 2020 2:51 am aaaa i love this drama sm, everything about this is perfect, and i love how they changed little bit from the manga and make it better. more importantly that idk takuyaa in thiss aaaaaa my ctq heart cant handle this lol

Rada Oct 24 2020 10:33 am I am thrilled with this story and these two actors. One with amazing abilities to make a funny scene in a second and at the same time be like a little puppy with those eyes Adachi (Eiji Akaso). Innocent. And the other to be so incredibly damn good looking, and those eyes that act perfectly , his body and face act just like his inner speech Kurosawa (Keita Machida) ..So both actors are fantastic.I don't know how many times I stopped these 3 episodes! I laughed, screamed and so on in a circle.I can't wait for the other couple to start .. it will be screaming but literally because that little white guy is like a snowflake. I like this series a lot and I can't wait for the next episode. Bravo and Congratulations to everyone who participates in this series and everyone who is part of this series. Thank you

BEST OF BL Oct 21 2020 1:32 am I so love this!! OMG I'm literally so hooked for the first 2 episodes already! The chemistry is everything, wow this is beyond good. I love the story, the characters I'm just so glued on how good their acting is!!! I'm so looking forward to this, I'm crying this is one of the most best bl series released by far. I can't wait for more episodes especially the release of the 3rd episode tomorrow thursday. I have watched the first two episodes for several times now. I repeteadly watch it for almost 6 times now. That's how good is this bl series is!! Uh, I so love this very much it's so especial. Thank you for letting this happen, the two leads are so powrful please do more projects in the future!!

Valerie Oct 15 2020 10:47 pm I really love the manga, and I can't believe it has a Live Action♡ Hope there will be many BL stories got adaptation in the future?️