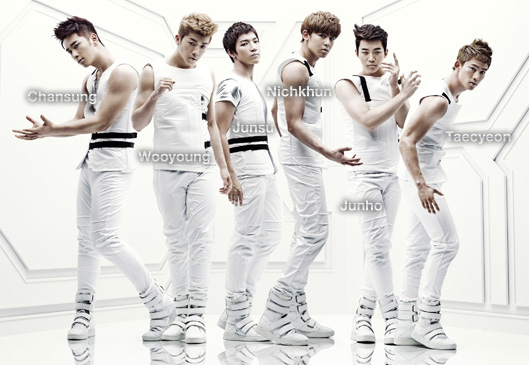 2PM is a South Korean K-pop group. 2PM debuted with the song "10 Jeom Manjeome 10 Jeom" (literal translation "10 Points Out of 10 Points") on September 4, 2008 through record label JYP Entertainment. The band began as a 7 member group (Junsu, Junho, Nichkhun, Taecyeon, Wooyoung, Chansung and Jaybeom), but controversy over derogatory statements made about South Korea on social network MySpace several years earlier led to the permanent dismissal of Park Jae-Beom in February, 2010.

2PM first became known to the public through the M.net TV documentary "Yeolheol Namah" (literal translation "Hot Blooded Young Man"), which followed a group of 13 individuals as they were mentored by JYP Entertainment into becoming eventual boy band "One Day." 3 of the 13 members were eliminated in the show and the remaining 10 individuals went on to to form the groups "2PM" and "2AM".

Wish y'all the best. Be happy. Fighting :)

Nica Jul 12 2016 10:20 am For me 2pm is the best. They are my ultimate idol. To bad that they are not as active as before. As a group i mean. Nichkhun is my ultimate bias in the group. I wish to meet them someday. 2pm fighting!

wooyoungie Jul 28 2015 2:08 am 2pm is literally the best kpop group I really love all the members especially wooyoung I fell in love with him on dream high and since then he's my ultimate bias. Each one of them is so talentful I love them all. FIGHTING 2PM.♥

Amber Dec 24 2014 7:15 am 2pm is the best. I love them all I love all their songs. I love their music plus they're all handsome and hot.. They're unique, talented and have good image. They're the only group I watched and will watch if given the chance..2pm Saranghe!

joshua Aug 20 2013 7:46 pm i like 2pm. i like their style specially nichkhun . all of them are awesome. i always play their song "i'll be back" and "ADTOY" . im so addictive to that songs. i dance it everytime. hehe. Godbless 2pm.