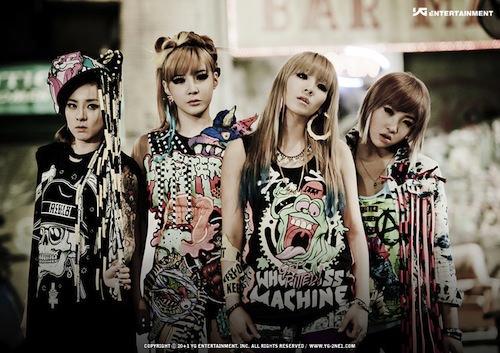 On March 27, 2009, 2ne1 released digital single "Lollipop" with K-pop group BIGBANG. The song "Lollipop" was released as a CM for a line of Cyon cellphones and ranked #1 on music charts. The band garnered attention even before their official debut. On May 6, 2009, 2ne1 released their first single "Fire." The group then made their performance on SBS' music program "Ingigayo" on May, 17, 2009. Upon the release of "Fire," the song climbed to the top of the music charts.

On February 9, 2010, 2ne1 released their single "Try to Follow Me" ("Nal Ddara Haebwayo"). In September 9, 2010, 2ne1 released their first full length album "To Anyone." The group took the unusual step of releasing three simultaneous lead tracks "Go Away," "Can't Nobody" and "Clap Your Hands" ("Paksoochyeo") to show their versatility. All three tracks ranked at the top of the music charts. During the 12th Mnet Asian Music Awards 2ne1 won 5 prizes.

From 2009 through 2011 2ne1 has shown their music and daily life through the reality show "2ne1 TV". 2ne1 also planned to enter the Japanese music market, but the earthquake & tsunami disaster postponed those planes. From September, 2ne1 plans to take part in promotions in Japan.

I listen to all Kpop Melody, and BTS and BlackPink are the particular 2 kpop band that I liked the most.

Kate May 15 2014 10:06 pm They came here in manila for their concert tomorrow. I'm their avid fan. I've waited at the airport and I've seen them. The sad truth is that 2NE1's escorts doesn't treat fans well. Fans cheer for the ARTIST and supports them. But what is so wrong for the fans to be treated unfairly by the 2NE1's escorts, and PA's? Is it so wrong to take pictures of their idols?