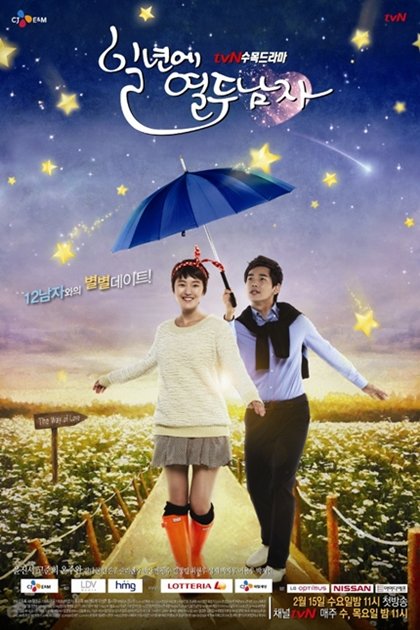 29-year-old magazine reporter Mi-Roo (Yoon Jin-Seo) believes heavily that astrology decides fate. She then writes a column for the magazine based on her own dating experience with dating 12 men with the 12 different astrological signs.

Mi-Roo has a boyfriend named Jin-Oh (On Joo-Wan) and they have lived together for one year. In fact, Jin-Oh is the only boyfriend Mi-Roo has ever had. One day, her friend Tanya (Koh Joon-Hee) tells her that Jin-Oh bought a diamond ring for her Christmas present. Ecstatic Mi-Roo goes out and buys an expensive watch for Jin-Oh in return. On Christmas Eve, Mi-Roo hands her expensive Christmas present to Jin-Oh. Jin-Oh, in return, gives her pots, fried foods and oil. He then goes to take a shower. Mi-Ro is fuming, so much so that she fries the expensive watch she bought for Jin-Oh. When Jin-Oh comes out of the bathroom he hands her the diamond ring. Mi-Roo is now completely embarrassed. An argument then ensues with the end result that Mi-Roo and Jin-Oh decides to breakup.

Mi-Roo leaves their shared apartment and stays at her friend Tanya's apartment. Due to drinking heavily the night before, Mi-Roo wakes up late and misses an important interview. At her office, Mi-Roo's boss chews her out for missing the interview. Her boss then orders Mi-Roo to go pickup a manuscript from Sophia, a famous sex columnist. Mi-Roo meets Sophia at a coffee shop. Sophia shows up completely covered, even with a scarf covering most of her face. Mi-Roo tells Sophia that astrology signs decides fate.

Days later, Mi-Roo is still waiting for the manuscript. When the deadline nears, Mi-Roo goes to Sophia's house to get the manuscript herself. She sees a man about to enter her house and asks the guy where Sophia is. The man says that Sophia told him that fate isn't decided by astrology signs, but by people and then left. Mi-Roo now realizes that she won't get the manuscript in time and is devastated. She goes to have a drink. A lot of drinks. Back at her apartment, Mi-Roo receives a phone call from her boss. Her boss tells her that if she can't get the manuscript from Sophia by tomorrow, she will be fired. Mi-Roo then sits in front of her computer and begins writing the column ...

Min Sung Hyo Jul 27 2014 1:21 pm Me and my mom absolutely love this drama! Though, we didn't like how it didn't show Mi Roo actually meeting some of the 12 signs, but in other peoples relationships it said down at the bottom of the screen what zodiac sign they were and telling what they were like.... that made me a little upset... but overall, it was a good drama, very funny and romantic... I was also kind of hoping that Mi Roo and Jin Oh would get back together in the end, but they didn't and that's okay because Mi Roo fell in love with Writer Lee as she calls him, and Jin Oh ended up with Hae Ra. Loved this drama! <3

atpalmer Dec 12 2013 3:29 pm This was the first drama I ever watched, and it's still my favorite. The characterization of each of the 12 men, based on their signs, is spot-on. I love the strong friendship between Tan Ya and Mi Roo.And here's what I LOVE more than anything: this drama doesn't engage in the constant semi-abusive behavior of the male lead toward the female lead that most k-dramas seem to take as gospel. There's no verbally abusive "insults disguised as love". There's no hitting walls/breaking things/being physically intimidating (I'm looking at *you*, "My Lovely Kim Sam Soon"). It's an adorable, refreshing drama, and I wish there were more like it.

blanca carolyna Dec 02 2013 3:14 pm how come there wasn't a sagittarius thats part of the 12 signs that pissed me off

currious... Aug 30 2013 3:27 pm I just added this kdrama to my ever-growing list on netflix to watch... by the sounds of everyone... it seams as if this is a good one! I just hope the ending is better than the last kdrama I watched... The musical :( left me so disappointed I almost felt like taking a kdrama break... Almost. ;)

Franchezka Aug 28 2013 8:51 pm omfg I loved this drama. I watched all episodes in around 3 days. I guess you can call me obsessed.. But it's summer, ok. I highly recommend this drama, ugh. It wasn't like most kdramas I've seen before. And the ending made me so happy, omfg. Because kdramas usually don't end the way I want, but this one did exactly. I'll have to agree with Eek's comment though, that part did annoy me. ;/ sorry for sounding rude. but anyway, I loved every character & their relationship towards the end. The twists & turns in this drama really surprised me, & the couples OMFG. (especially tanya & kwan woo, ok like wtf i wasnt expecting you two)

Eek Jul 31 2013 4:52 am The main character is so ugly that it pisses me off to a point where it actually becomes distracting and takes away from the believability of the drama. The storyline itself was one of the better ones not many dull moments or a million flashbacks they just killed it with that fug main character. Basically every other female character outshines her.

Jim Chancey Jul 12 2013 10:07 pm I've seen many kdrama over the past couple of years, but it had been awhile so i gave this show a try.It took me 2 shows then i was hooked.Like many kdrama there are many surprises and plot changes.The characters really grew as the show progressed,especially hae ra and tanya.By the end i loved them all .The 16 episodes unfold as a deep meaningful , heartfelt tale of love , and it's many facets.I would highly recommend this.

kpoppy Jul 10 2013 2:36 am I felt like they rushed the rest of the episodes. Pretty much after Leo they missed out on the other important signs. Virgo, Scorpio, and Sagittarius. However they highlighted Libra and skipped the rest, biased much?

Rudolph Apr 10 2013 2:18 pm An interesting discussion is worth comment. I think that you ought to write more about this subject matter, it might not be a taboo matter but typically folks don't talk about these issues. To the next! Many thanks!!

Steph Jul 06 2012 7:45 am I am from the phil and korean dvds subtitles isn't good but on tvn it has good subtitles but I don't have time to watch it everytime so it's really disappointing. But i really liked this drama so far. :)

Jenny Apr 01 2012 3:25 pm I wasnt sure about this drama, but the first episode hooked me. Not sure why I didnt know of this drama sooner ~ Recommended