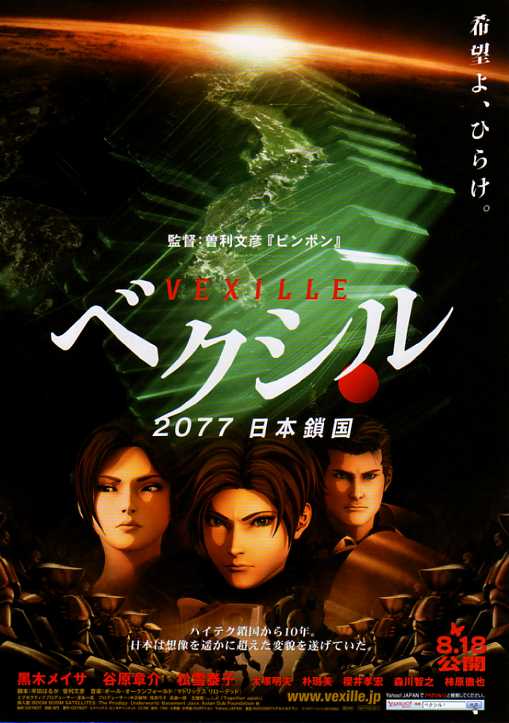 2077: for ten years, Japan has isolated itself from the rest of the world, opposing a United Nations treaty restricting areas of advanced research in biotechnology. At the behest of Japanese mega-corporation Daiwa, who monopolize the global market in industrial robotic technology, the country’s borders have been closed and a sophisticated magnetic shield has blocked communication and satellite surveillance. Life in Japan has become a mystery.

Following the discovery of a “human” limb with flesh replaced by a form of bio-metal, S.W.O.R.D., a United States Special Forces unit that polices treaty violations, is dispatched to infiltrate Japan. The unit, which is led by female commander Vexille, teams with an underground rebel force in Tokyo. The revelation of Japan’s new reality shakes Vexille, as she witnesses the destruction of both land and citizenry by Daiwa and the monstrous Jags, whirling, metallic android cyclones (reminiscent of Dune’s sandworms) that seek out and devour any form of metal in their path.

Vexille director Fumihiko Sori is a visual-effects specialist who made his directorial debut with the 2002 smash Ping Pong and who was producer and VFX director on the groundbreaking Appleseed. With Vexille, he reaches new levels of excellence in the world of animated art, placing expressive characters against a landscape of stunning vistas. These visuals serve as a springboard for breathtaking action sequences that race in tune to the staccato music of DJ Paul Oakenfold, the film’s soundtrack supervisor. A nest of spider-like battle droids blast away at hulking robotic opponents; all-terrain vehicles rip through the desert pursued by the voracious metallic worms; agents in gleaming battle armour crash and spin in high speed chases.

However, contained within this multi-sensory spectacle is a reflection on the role technology will play in our future, with the potential to both liberate and inhibit humankind. This film’s contemplations are heightened by Sori’s unusual, introspective decision to position Japan in the role of the story’s international villain.